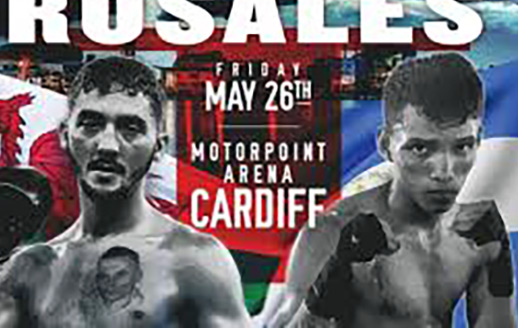 Andrew Selby thrilled his hometown fans at the Motorpoint Arena in Cardiff with a stirring decision over Cristofer Rosales in a WBC flyweight title eliminator.

Rosales (23-3, 15 KOs) to his credit fought gamely throughout pressing the 28-year-old Welshman and though he had his successes, but Selby’s speed and skills saw him over the line. It was a fight that looked closer than the scorecard suggested.

Selby turned pro in October 2015 following a glittering amateur career. During his time in the unpaid ranks, Selby twice won gold at the European Championships, silver and bronze medals at consecutive World Championships and fought at the 2012 Olympics.

In chief support of the card, Matty Askin knocked Craig Kennedy out in six rounds to win the vacant British cruiserweight title.

Askin (22-3-1, 14 KOs) dropped local favorite Kennedy in the opening round with an overhand right. To Kennedy’s credit he got up and battled on but every time Askin landed cleanly he hurt Kennedy.

Finally at 2:13 of the sixth round, Askin connected with a big right hand and dropped Kennedy for the second time in the contest. Kennedy (16-1, 8 KOs) tried to get up but was counted out by referee Robert Williams.

The 26-year-old southpaw figures to be kept busy as he looks to make up for lost time due to personal issues.

Jermaine Asare (7-2, 1 KO) was stunningly knocked cold in the opening round by Malik Zinad. Zinad (9-0, 8 KOs) hurt Asare early and was in no mood to go rounds, landing a devastating right hand that deposited Asare onto the canvas. No count was given and the fight was waved off instantly by referee Martin Williams. Asare was down for several minutes and was administered oxygen but was able to leave the ring on his own.

The 23 year old from Malta by way of Libya is handled by former light heavyweight titlist Donny Lalonde and appears to have a bright future.

Questions and/or comments can be sent to Anson at [email protected] and you can follow him at
www.twitter.com/AnsonWainwright