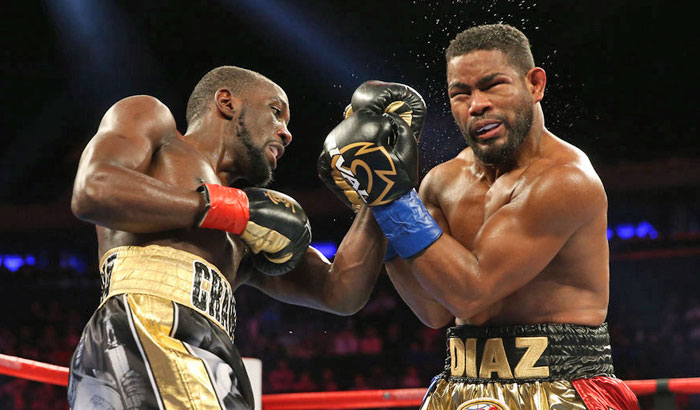 The past weekend had a little bit of everything – impressive performances from special fighters, strong statements from rising stars, crazy knockouts, controversial cards and a rogue handler who punched the opponent of his boxer.

Here are the biggest winners and losers of the weekend.

Terence Crawford: Vasyl Lomachenko made a pretty good opponent in Jason Sosa look foolish last month before stopping him in nine rounds, which enhanced his reputation as a pound-for-pound destroyer.

On Saturday, it was Crawford’s turn.

Diaz (19-2, 9 knockouts) was a hopeless, battered mess when his corner mercifully stopped the fight after 10 rounds.

The Dominican isn’t a great professional but under normal circumstances he should be very difficult to beat, given his background. And Crawford (31-0, 22 KOs) made him look as if he were an amateur again, further evidence of how special the RING junior welterweight champion is.

Crawford, 29, seems to be getting better and better.

The only thing missing at this point is a defining victory, his best so far probably being his onesided decision over Viktor Postol last July. That’s why many people hope Manny Pacquiao agrees to face him. Pacman isn’t the fighter he once was but he’s still damn good — light years better than Postol.

I think it would be a tough fight for Crawford but probably one he’d win, which would give him a leg up on Lomachenko, who doesn’t have a victory of that caliber. If not Pacquiao, then there are other big names – Keith Thurman? – at 147 pounds that could determine how big Crawford gets.

I have no idea how this pound-for-pound drama will end. Will it be Lomachenko who ends up at No. 1? Will it be Crawford? Mikey Garcia? Errol Spence? Someone else? Maybe they’ll all rotate depending on circumstances.

All anyone knows at the moment is that the race to the top is fascinating.

Gary Russell Jr. and Gervonta Davis: Russell underscored what we already know about him while Davis made a strong statement that he could soon join the handful of truly elite boxers worldwide.

One thing I liked about Russell’s performance against Oscar Escandon (25-3, 17 KOs) is that Russell beat the durable Colombian at his own game, outfighting him on the inside – where he landed almost at will – en route to a seventh-round stoppage Saturday in Oxon Hill, Maryland.

Outside, inside, somewhere in the middle, it’s next to impossible to beat the quick-handed and tough Russell (28-1, 17 KOs).

His problem has been inactivity. Before the Escandon fight, he hadn’t been in the ring for 13 months. And before that it was a year. A fighter can’t build momentum with that kind of schedule, even one as good as Russell.

And, more important, he needs to lure a big-name opponent into the ring. That also has been difficult. Russell hit a peak when he stopped Jhonny Gonzalez in March 2015 but followed that with victories over solid, but limited foes in Patrick Hyland and now Escandon over those two years.

Russell needs to take part in a meaningful event to begin realizing his potential.

Davis (18-0, 17 KOs) is looking more and more as if he’s made of star material. The protégé of Floyd Mayweather Jr. traveled to the home country (England) of then-unbeaten Liam Walsh and stopped him in the third round.

The IBF junior lightweight titleholder hurt Walsh (21-1, 14 KOs) with a left hook and then clubbed him to the canvas. Walsh got up but, after a few more punches, the slaughter was ended by the referee. It was Davis’ ninth consecutive KO.

Davis has the ability to overwhelm opponents – and impress fans – with his speed, power and aggression. I have a feeling that won’t change as his opposition continues to get better.

Leon Lawson Jr.: No doubt about this one. I believe Dirrell’s uncle and assistant trainer will end up as the biggest loser of the year.

Lawson was enraged that Jose Uzcategui punched his nephew Andre Dirrell after the bell to end Round 8 on the Russell-Escandon card, rendering Dirrell unable to continue. Lawson obviously felt protective of someone he loves.

The problem was where Lawson took that rage. He cracked an unsuspecting Uzcategui on the jaw as the Venezuelan fighter stood in his corner after he was disqualified, creating a combustible situation in the ring that could’ve ended with serious injuries.

Uzcategui took the shot like a champ and didn’t punch back but the damage was done, to Lawson at least. He was wanted on assault charges at the time this was written and could spend time in prison. I don’t advocate a substantial sentence. It was a crime of passion, after all. Uzcategui was more surprised than injured. And, for what it’s worth, Dirrell apologized for his uncle.

Lawson should be punished, though. If that wasn’t assault, I don’t know what is. Uzcategui was defenseless at the time he was struck. Lawson also damaged a sport that is constantly fighting to defend its reputation, which hopefully will add a suspension to any jail time Lawson does.

And, finally, Lawson should simply be ashamed of the manner in which he attacked Uzcategui. It was cowardly. Sucker punches always are.

Another reason Lawson’s assault on Uzcategui was unnecessary is that his guy won. The DQ gave Dirrell (26-2, 16 KOs) what the IBF calls its “interim” super middleweight title, which appears to set up a rematch with unified titleholder James DeGale. Dirrell failed in his two previous title shots, losing decisions to Carl Froch in 2009 and DeGale in 2015. Can he beat DeGale? Possibly. I think he demonstrated against Uzcategui that he retains at 33 much of his ability and athleticism. He can give anyone at least some trouble. I’d pick the Englishman to win, though. He’s the hotter, fresher guy. … Uzcategui (25-2, 22 KOs) can blame only himself for his disqualification. He punched Dirrell after the bell at the close of Round 1, was warned and then did it again after Round 8. That’s unfortunate for him. He fought well and with great energy, which gave him a lead on two cards when the fight was stopped. He’ll be back. …  No knockout over the weekend was as striking as that delivered by Ray Beltran, who sent Jonathan Maicelo (25-3, 12 KOs) to the hospital with a single left hook in the second round on the Crawford-Diaz card. Maicelo was doing some nice work when, BAM!, the punch instantly rendered him unconscious and his head hit the canvas with great force. Beltran (33-7-1, 21 KOs) could be the biggest winner here. The youngish 35-year-old is now the mandatory challenger to IBF 135-pound titleholder Robert Easter and the victory reportedly enhanced his chances of gaining his green card, which would allow him to stay in the U.S. He was asked immediately after his KO what that would mean to him and his family and he fought back tears. Good night’s work. …

David Benavidez’s knockout of Rogelio Medina (37-8, 31 KOs) on Saturday in Laredo, Texas, wasn’t as quick as Beltran’s but it too was brutal. The super middleweight contender put Medina down in each of the last three rounds, finishing the job by pounding Medina to the canvas in the eighth. Medina couldn’t go on. Benavidez (18-0, 17 KOs) would appear to have all the tools he’ll need to become a star – skills, power, a killer instinct – and he’s a baby at 20 years old, which means his best is almost certainly in front of him. … The decision in the Hassan N’Dam–Ryota Murata middleweight fight Saturday in Tokyo was curious. Most observers thought Murata, fighting in a card staged by his promoter in his home town, deserved the nod but it was N’Dam who emerged with a split-decision victory and the WBA’s bogus “regular” title. One judge, Gustavo Padilla of Panama, gave N’Dam nine rounds. WBA President Gilberto Mendoza said he was embarrassed by the decision and ordered an immediate rematch. Let’s hope it happens for Murata’s sake. That’s a tough way to lose your first fight. … Not sure what to make of Rances Barthelemy. The talented Cuban defector has held titles in two divisions but has yet to break through as anything resembling a star. Barthelemey (26-0, 13 KOs) defeated Kiryl Relikh (21-2, 19 KOs) by a unanimous decision on the Russell-Escandon card but many believe Relikh deserved to win. And, for Barthelemy, that followed a so-so performance against Mickey Bey in June of last year. Something is missing. …

One more KO worth checking out: Milan Melindo (36-2, 13 KOs) stopped veteran Akira Yaegashi (25-6, 13 KOs) in only 2 minutes, 45 seconds to win the IBF flyweight title Sunday in Tokyo. Melindo put Yaegashi down with a left hook and then, moments later, finished the job with a straight right. It was the biggest victory of the Filipino’s career. … And, finally, Diego De La Hoya (18-0, 9 KOs) gave a solid performance in outpointing Erik Ruiz (16-7-1, 6 KOs) on Thursday in Tucson, Arizona. De La Hoya seems to have the tools and backing to have some success. We’ll see when he steps in in opposition.