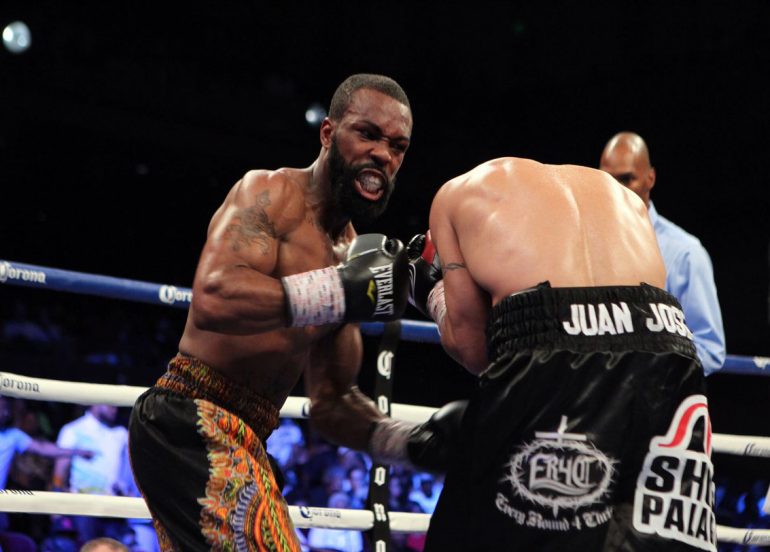 Photo / @ShowtimeBoxing
20
May
by Joseph Santoliquito

OXON HILL, MD — Weekends were always the same around the Russell house. The car was packed with bags of gloves, and tape, and gauze, and boots, and everything else a fighter needs. Every weekend one or two of the Russell brothers would fight on the same card.

That changed Saturday night—and the results for all three Russells could not have been any better. Gary Antuanne and Gary Antonio won by TKO earlier, and Gary Jr. closed the show at the MGM National Harbor, in Oxon Hill, Maryland, by defending the WBC featherweight title for the second time with a seventh-round TKO at :59 of Oscar Escandon on the Showtime-televised main event.

Gary Russell Jr. (28-1, 17 knockouts) dominated the fight from start to finish, opening by banging the body and using different angles to penetrate Escandon’s defense. A Russell overhand right in the third dropped Escandon. When he did get up, Escandon (25-3, 17 KOs) didn’t know where he was.

And so it went, round after round, the same pattern. Finally, in the seventh, a Russell right hook officially ended at :59 of the round. However, Russell Jr. did not want to talk about his victory immediately after the fight. Two other events took precedence in his mind.

“First and foremost, I got to say happy birthday to my father. Secondly, I’d like to tell all the fans that came to support me: I love you all. Thank you.” Gary Jr. said. “I want to apologize for the gladiators. The gladiators are warriors. The (Andre) Dirrell camp, sometimes emotions build up and take the best of us (for the near riot that erupted earlier on the show). Please forgive them.”

Then Russell addressed his fight and what he hopes to do next.

“I fought a tough competitor. I knew Escandon wanted to come and bring his best. I knew he was going to come forward. I was ready for him. We are warriors. Lomachenko, that’s a no-brainer. I don’t want to do it for the fans or for the media, I want to do it for myself. And I want to do it twice. I’ll knock him out the first time and then, he’ll want me to fight him again.

“I’d love to unify against all the other guys in the featherweight division. I’d like Leo Santa Cruz, Lee Selby, and Oscar Valdez.”

The first televised fight, a WBA 140-pound title elimination bout featuring Cuban Rances Barthelemy (26-0, 13 KOs) and Russian Kirill Relikh (25-3, 16 KOs), was a little hard to decide. Each fighter was knocked down. Each fighter had their moments.

In the fifth, Relikh seemed to hurt Barthelemy, who teetered backward slightly and then regained his balance. Then a left hook to the top of the forehead later in the round had Barthelemy in really bad shape. That’s when referee Kenny Chevalier inexplicably stepped in and gave Barthelemy a standing-eight count, stating that the ropes were holding him up. Somehow Barthelemy, who had switched from orthodox to southpaw throughout the fight, survived the round.

By the seventh, Barthelemy appeared to have recovered. He began snapping his snap and countering Relikh. In the eighth, however, Relikh began turning it around again, raking the body and mixing in an uppercut or two. That’s when Barthelemy nailed Relikh with a right uppercut to the body, forcing Relikh to take a knee—and an eight-count.

When the scorecards were read, the crowd had a tough time accepting it.

“It feels great to be going forward. The 11-month layoff really took a toll on my body and I felt it in the ring,” Barthelemy said. “I knew it was a close fight but knew I should get a unanimous decision. Relikh was a hard hitter. He surprised me with a right hook in the fifth round and I hit the canvas, so I knew I had to be careful going forward. I knew I had lost that round and had to come back stronger.

“I took the sixth round to take a breather and then I came back to work the body. Once I knocked him down I saw that he was hurt and protecting himself upstairs a lot more so I knew I was going to have to be more strategic to come out victorious.”

“Of course I thought I won. Even TV [SHOWTIME’s Steve Farhood] thought I won,” Relikh said. “The referee did his job when he called it a knockdown in the fifth. I thought it was over.”

“The two low blows definitely affected me. It takes the wind out of you. This is boxing not MMA.”

In a scheduled six-round super bantamweight fight, Gary Antonio Russell (8-0, 6 KOs) ended Jovany Fuentes (7-9, 6 KOs) at :22 of the third round in another lopsided Russell showing. Gary Antonio was the larger, more technically advanced fighter and it showed. Fuentes, who lost for the eighth time in his last 10 fights, put up decent resistance, but Gary Antonio used his southpaw jab and easily break down Fuentes’ defense and knock him down in the second and again in the third, when Fuentes’ corner mercifully stopped for their fighter.

“We capitalized on everything we worked on in the gym,” Gary Antonio said. “We knew he favored his right hook so I would walk to it to try to get him to throw it and he wasn’t really doing it. I just knew I needed to touch and fire and that is exactly what I did. There was never any extra pressure because we didn’t magnify this fight just because it was at home. We treat every fight like a championship fight.

“The Russells are two for two, but personally I think we are already three for three … that’s what’s expected tonight.”

Making his pro debut, 2016 U.S. Olympian Gary Antuanne Russell easily stopped Joshua Ross (2-4-4) at 2:25 of the first round in a scheduled four-round super lightweight bout. Gary Antuanne knocked the far smaller Ross down three times in the first minute, before referee Bill Clancy saw enough and waved it over.

“I listened, I followed instructions and it led me to a fast victory. I wish it would have lasted longer. I was looking forward to it being more exciting,” Gary Antuanne said. “I wasn’t expecting it to be so short. We trained and sparred for twelve rounds, as if I was a professional before my debut and that’s what I was prepared to do – go the distance. But I executed what my father told me to and I got that quick victory.”