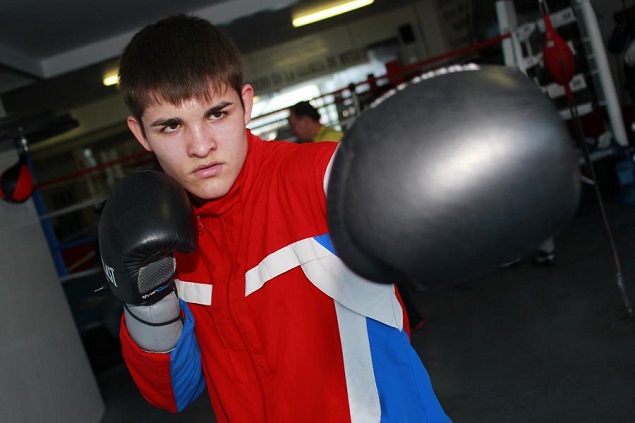 Steve Nelson had too much power for Gilberto Rubio to deal with in the opener of the Crawford-Diaz/Top Rank card at Madison Square Garden, which kicked off at 6:31 p.m. ET, in front of diehards and some Team Nelson rooters, along with lots of personnel there to work.

Nelson went to 7-0, while the loser Rubio (from Mexico) dipped to 7-6 after this light heavyweight scrap finished, in round two.

In the first, the Nebraskan friend of Bud, Nelson, came out the aggressor. He had Rubio on the ropes and banged left hooks to the body. Rubio then pressed forward to change it up, but went back to backing up. Then he hit the deck, right before the bell to end the round. Rubio beat the count. Blood dripped from beside his right eye. A left-right combo did the felling damage.

In the second, we saw more left hooks to the body. Down went Rubio (1-5 in his last six), again, and he was up at 8. Down he went again, and the ref said no mas.  The end came at 36 seconds into the second.

In the second tango on the nine bout card, 1-0 Henry Lebron, from Puerto Rico, took on Johnny Estrada (0-1 from New Mexico) in a 130-pound set for six or less. It was less. Lebron got cooking quick after an initial feeling out. He has quick hands and uses them to counter smartly, we saw. In the second, he’d paw a jab, slide left a nibble, then wait for that right opening and throw nasty. A right stunned and then a left really stunned Estrada, and the ref waved it right off, even though he was on his feet. The end came at 52 seconds into the second.

The third bout on the sheet saw Faz Gaibnazarov, who won gold at the 2016 Games, from Uzebekistan meet up with Agustine Mauras from Massachusetts, 1-0 versus 6-2-3 entering, a light heavy scrap. The lefty had a few loud Uzbek buds in the stands, as he started fighting at 7:00 PM, in a joint (not that) filled with a few hundred folks. “Fozzy,” they chanted. Faz has quick feet, which he moves quickly and adeptly to get the angle he wants. His left hand means business, often. Gus shot right hands, by the book on a lefty, and lost the first round without a doubt.

In the second, Faz, managed by Egis Klimas,  showed nimble and light feet again. He owns confidence that tells you he’s done this rodeo on the circuit for awhile. His left from underneath worked well, as Gus had to work hard at defending, never mind trying to score points on O. To 3; “busy, busy,” his rooting party in section 116 yelled. It was more of the same to six. And beyond…The Mass man got points for hanging tough. He acted like he won after, because, know what, he did, seeing the final bell. The judges spoke, seeing it 80-72, times three.

To bout four on the sheet..Konstantin Ponomarev (from Russia; 31-0 entering) met with Ed Paredes (37-6-1 coming in; from Florida) in a super welter tango. “Pono,” trained by Abel Sanchez, in round one ate a counter left. Then he got into a groove. To the second—Pono stood straight and tall, looking like a inviting prospect for a top ten super welter. He mixed his jab, low and high, and to round four, Paredes was just backing up. Then, with a minute left, Paredes woke up, got busy. In round five and six Pono was the aggressor, staying busy and throwing combos, winning rounds. To Round 8; Pono was the boss. Then he ate a right to start the round, another periodic reminder Paredes owns some skills. To the cards we went: it was 78-74, times three.

My take: Here is a guy with a record that is gaudy but he is still a work in progress more so than the record would tell you.