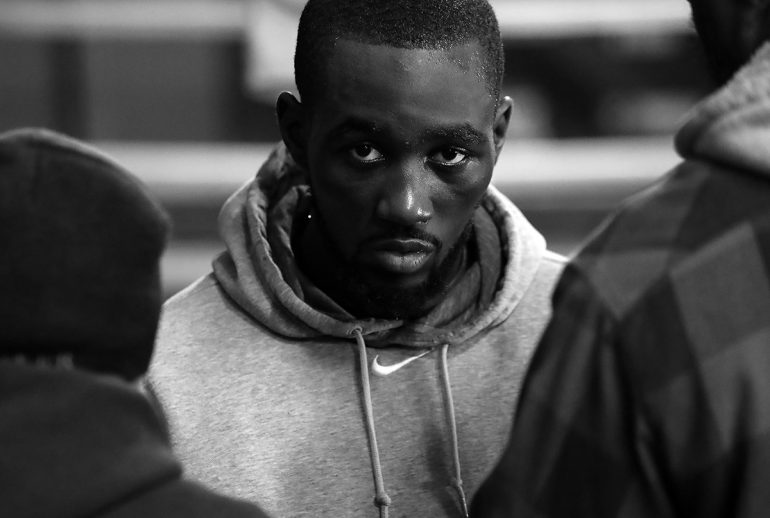 Photo by Mikey Williams / Top Rank
18
May
by Mike Coppinger

NEW YORK — Terence Crawford is a lot of things. One of the best fighters in the world. A two-division world champion. A staple of HBO’s boxing programming.

What eludes him, though, is the kind of the attention his unusual talent demands.

Sure, the RING junior welterweight champion is the unquestioned A-side in every promotion he headlines. Look no further than his Times Square billboard advertising his title fight against Felix Diaz on Saturday at Madison Square Garden. The ad resembles more one-man show than sporting event, with only Crawford’s face depicted on the giant sign.

For Crawford to reach the next level — to sneak into the public consciousness in a niche sport geared toward dedicated diehards — there’s only one path: He must brush up against greatness on the grandest of stages.

With Floyd Mayweather Jr. retired, save for his quixotic quest to complete a deal for a farcical money-grab fight against UFC champion Conor McGregor, there’s only one man who can help Crawford cross over: Manny Pacquiao.

The fighters are both promoted by Top Rank, but so far, the fight hasn’t come close to fruition.

“If the Pacquiao fight happens, it happens,” Crawford told RingTV.com on Thursday following a news conference at the Garden to promote the fight vs. Diaz. “My camp and his camp never had a moment of conversation about us two fighting so I don’t even look at the fight as being realistic until that starts happening.”

Top Rank CEO Bob Arum bandied around Crawford’s name as a Pacquiao opponent last last spring, but the Filipino senator picked an unnecessary third battle with Timothy Bradley, a good friend of Crawford whom he vows never to face. In November, the same scuttlebutt resurfaced, but that time it was Jessie Vargas’ turn to face Pacquiao.

When will Crawford win the sweepstakes for which he has already rightfully punched his ticket?

Arum swears a Pacquiao-Crawford fight could materialize in November or possibly the first week of December to avoid the holidays. First up for Pacman is a welterweight title defense against lightly regarded Australian Jeff Horn on July 2 in Brisbane, a bout that’s expected to draw 50,000-plus fans.

Next for Crawford, should he top Diaz as expected, would be a fight against South African Julius Indongo to unify all four major sanctioning-body titles. Arum told RingTV.com that matchup could take place in August.

If Pacquiao-Crawford doesn’t happen in 2017, will it ever? Pacquiao is 38 and counting while Crawford is only improving. It seems the time is ripe to finally make the bout Arum calls “the best that can be made” in boxing.

Crawford (30-0, 21 knockouts) isn’t demanding it, but he has made it clear the Pacquiao bout is the one the Omaha, Nebraska, native needs to continue his ascent.

After all, it’s not going to be Crawford’s demeanor that elevates him: He’s a quiet, humble guy. No, to prove he’s the best and win a wider audience he needs to stand across the ring from the Filipino legend, who even in the twilight of his career remains a tour de force as evidenced by his 2016 campaign.

“Who wouldn’t want to fight Pacquiao and have the opportunity to beat him and say you beat a legend and a great champion?” asked Crawford, who is No. 5 on the RING pound-for-pound list. “That’s everybody’s dream; that’s everybody’s goal, to be the champion and be like — I’m here now.

“Everybody doesn’t get what they want; you gotta be patient. Pacquiao, he’s a great champion, he deserves to fight whoever he wants. He gave a lot to the sport, so it’s his decision.”

Crawford has one thing on his side: time. At 29 years old and with two belts around his waist — and likely two more to come — “Bud” isn’t in a rush. And if it’s not Pacquiao in 2017, there’s plenty more options to choose from in the most talent-laden division in boxing.

Crawford said he’ll make the jump to welterweight soon enough, and since Arum made two consecutive deals across the aisle to procure the services of an Al Haymon fighter in John Molina Jr. (whom Crawford stopped in December) and now Diaz, there’s confidence an agreement can be struck for the bigger names — including A-side fighters like Keith Thurman, Errol Spence, Danny Garcia and Adrien Broner.

Those are all step-up opponents for Crawford, whose most important victory to date is a lopsided decision over Viktor Postol, but Pacquiao remains the most tantalizing launching pad.

For now, Crawford says he has one strategy: Be patient and continue to win. The rest will fall into place.