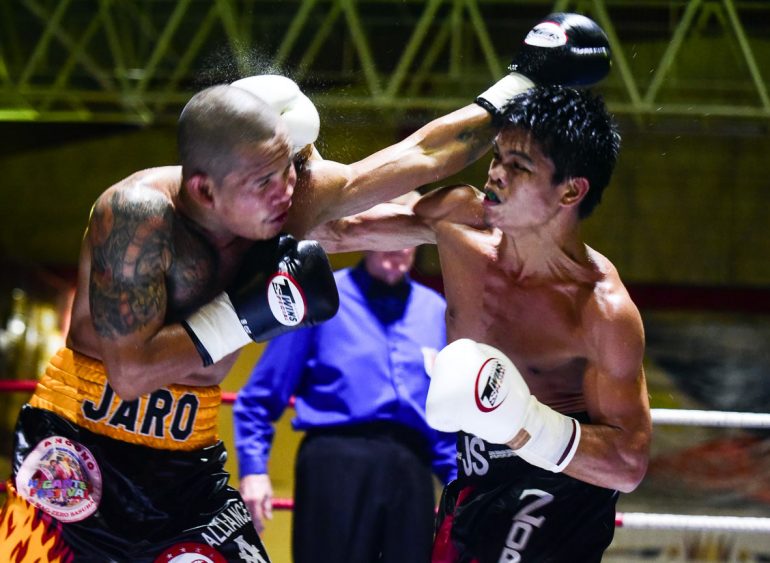 “This is like a world title match for me because he is an ex-world champion,” said Sultan (13-3, 9 knockouts), who is rated no. 14 by the IBF at junior bantamweight. “Maybe my promoter will put me in with the world champions.” For Jaro (43-14-5, 30 KOs), the loss ends a nine-fight winning streak and likely relegates the 16-year veteran to gatekeeper status if he continues to fight.

Sultan used his speed and jab in the early rounds to keep Jaro at bay and set up straight right hands which landed with regularity. Jaro, who is 10 years older at 35, had the benefit of fighting in his adopted home province and never stopped moving forward, even as Sultan uncorked right uppercuts and turn over right crosses in fluid motion when he stepped in.

A headbutt in the fourth round split Jaro’s forehead open and prompted him to drop to his knees to recover. The ringside physician ruled that the cut was not in a dangerous spot and allowed the fight to continue. Later that round Jaro had Sultan momentarily hurt with a sneaky right uppercut to the midsection.

Sultan recovered, and the following round had Jaro nearly out as constant barrage of right crosses and right uppercuts overwhelmed Jaro, who won the WBC and THE RING’s flyweight title in 2012 with an Upset of the Year knockout of Pongsaklek Wonjongkam. Jaro remained upright and ended the round by rocking Sultan with a lunging left hook.

Even if speed and reflexes had abandoned Jaro as he aged, he remained as brave as ever. As the rounds progressed the question became, how much longer would he be willing to take Sultan’s straight right hands? The seventh round was a particularly difficult one to watch for Jaro’s fans in the crowd as a combination that started with a cross, followed by a right uppercut and another right hand had Jaro momentarily knock-kneed.

The end began late in the eighth as a counter left hook rocked Jaro into the ropes, and a follow-up assault sent Jaro through the ropes for the ten count. The official time of stoppage was 2:07.

The fight was mandated by the IBF for Sultan’s Inter-Continental junior bantamweight belt, and a failure to meet Jaro could’ve compromised his ranking with the New Jersey-based sanctioning body, the show’s promoter Anson Tiu Co of Shape Up Boxing Promotions says.

Sultan, a native of Tampilisan, Zamboanga del Norte, is now based out of Cebu City, where he’s part of the ALA Boxing stable.

Though overlooked often due to the three early defeats he suffered, Sultan has risen to be one of the most promising fighters out of the ALA stable after scoring four straight knockout wins, including second round knockouts of Tatsuya Ikemizu in Japan, and Makazole Tete in South Africa last year.

Edito Villamor, who trains Sultain alongside Robert Eturma, says Sultan could be ready for a world title shot in “maybe two or 3 fights,” while ALA Promotions president Michael Aldeguer thinks it’s time to put the spotlight on Sultan.

“He has the heart, he needs to work on a bit of skill and his jab more but the heart and power is there. Hopefully we can put him more on the bigger cards,” said Aldeguer, who flew in from Cebu for the fight along with unbeaten featherweight Mark Magsayo.

Earlier in the night, Manila-based Japanese junior bantamweight Kyota Otsuka (6-2-2, 4 KOs) capped off an entertaining brawl against Filipino Arnel Caoctoy (6-6-1, 2 KOs), dropping his opponent in the fifth round on a left cross, right hook, left cross to force the stoppage at the 2:37 mark.