Eddie Hearn says Fury won’t be next for Joshua 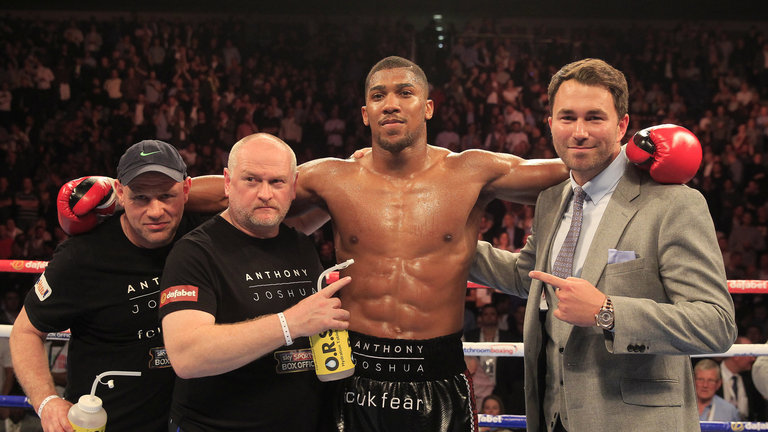 The shockwaves are still resonating following Anthony Joshua’s thrilling 11th-round stoppage of Wladimir Klitschko and top heavyweights the world over are clamoring to be next in line for the IBF and WBA titleholder.

Within hours of a career-best victory Joshua, who is rated No. 1 by THE RING, was predictably challenged by reigning RING champion, and countryman, Tyson Fury, who revealed that he would go straight into the all-British superfight without a tune-up.

Fury, who has not fought since outpointing Klitschko in November 2015, is scheduled to appear before the British Boxing Board if Control (BBBoC) next week. The unbeaten 28-year-old will be required to address a variety of topics including his mental health and doping allegations.

Matchroom Boxing boss Eddie Hearn, who guides Joshua’s career, is well-aware of the magnitude of a potential Joshua-Fury fight but, perhaps understandably, feels that these issues put the fight on the backburner.

“We are desperate for that fight because AJ thinks he wins comfortably,” said the promoter to Talksport radio in the U.K. “It is a great fight and it is the biggest fight out there. But we can only concentrate on AJ’s career and guiding him.

“He (Fury) is miles away from fighting. He is in a terrible physical way at the moment. He doesn’t have a license, he needs to go back to the board, and he is under investigation for a failed (doping) test.

“There is no one that wants to see him back more than me, but it is miles away. He is not the next fight because he won’t be ready in time.”