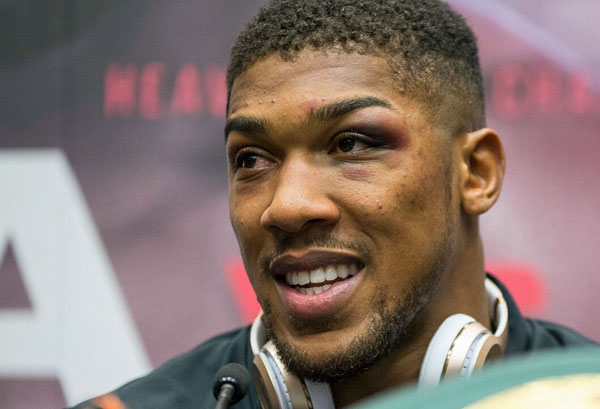 THE BIGGEST WINNERS AND LOSERS OVER THE WEEKEND

Anthony Joshua: Joshua did what most people thought he would do – he beat Wladimir Klitschko – but who would’ve predicted this?

The most impressive aspect of Joshua’s performance was his ability to overcome adversity, as he had to survive a knockdown and some harrowing moments of fatigue mid-fight before finally stopping Klitschko in the 11th round before 90,000 at Wembley Stadium in London.

Joshua put his 41-year-old opponent down in Round 5 and tried aggressively to finish him, which seemed to sap his strength. It looked to me in Rounds 6 (when Joshua went down) and 7 that the 27-year-old Englishman might not have the fuel to finish the fight.

The 2012 Olympic champion was in serious jeopardy of losing everything he has built the past few years.

Then, suddenly, he found a second reservoir of energy and turned the tide back in his favor. He won Rounds 9 and 10 on my card and then finished the job in a riveting Round 11, landing a head-spinning uppercut, putting Klitschko down twice and battering him mercilessly until the fight was stopped.

That’s how a true champion wins a fight, overcoming a near disaster, taking charge when it counts most and then finishing the job in spectacular fashion. Brilliant.

Joshua’s performance certainly wasn’t beyond reproach. Remember: Klitschko is in his 40s and hadn’t fought since November 2015, 17 months ago, when he lost a one-sided decision to Tyson Fury.

One could argue that Joshua shouldn’t have had such a difficult time with Klitschko given the hype surrounding him. Fury was justified when he tweeted immediately after the fight Saturday: “Wellldone @anthonyfjoshua good fight, you had life & death with @klitschko & I played with the guy, let’s dance.”

I think it’s important to keep Joshua’s evening in perspective, though. He made a rookie mistake that he isn’t likely to make again when he put Klitschko down: He expended too much energy in an attempt to end the fight at that point, which left him temporarily depleted and opened the door to Klitschko’s comeback.

Joshua (19-0, 19 knockouts) said afterward, “I’ll improve.” He will. He left the ring with a defining victory and the best learning experience of his career.

The world now considers Joshua the No. 1 heavyweight in the world because of Fury’s hiatus from the sport. He earned that status on Saturday night before his adoring countrymen. I know boxing fans now can’t wait to see what comes next.

Wladimir Klitschko: Klitschko (64-5, 53 KOs) will kick himself forever when he thinks about this fight.

The old man had no chance against Fury, whose cautious, keep-my-distance style doesn’t suit him well at this stage of his career. Klitschko could’ve beaten Joshua if just a few things had gone differently, though.

Klitschko hurt his weary opponent when he put him down with one of his legendary straight rights in Round 6. One or two more telling shots might’ve ended the fight in his favor then and there. And if he had managed to avoid the big uppercut that led to his demise in the 11th round and did a little more work down the stretch, he might’ve walked away with a close victory or draw.

Those are monumental “ifs,” I know, but I’m sure that’s what Klitschko will remember about this fight – that he had a good chance to win the biggest fight of his career and reclaim his position at the top of the heavyweight division.

The rest of us will remember one of the most courageous performances in recent years. Many gave Klitschko little chance of winning but he took Joshua to hell and back. I wasn’t alone in wondering whether he could survive after going down in Round 5. He responded by putting Joshua down the following round.

And the fact he was able to rise from two hellacious knockdowns in the final round was awesome in the most literal sense of the word. If he was going to go out, he stated clearly in his deeds, he wasn’t going willingly.

Klitschko said afterward that he didn’t feel like a loser. He was anything but. He should be proud of himself. Those who have admired him for so many years definitely are.

Boxing: It was a perfect storm. The venue (Wembley Stadium). The crowd (90,000 singing fans). The story line (the best heavyweight of the past vs. the presumed king of the future). The hype (immense). And, most important, the fight itself (wow!).

That was boxing at its best.

The fight was an instant classic, an old-school brawl with back-and-forth drama and a few surprises. Joshua went down once and Klitschko fell three times, the last two of which led to the thrilling finish. A big fight actually went beyond the hype.

Of course, the fans at Wembley were ecstatic. That’s exactly what they hoped to see, their man scoring a breathtaking knockout to lay claim as the top heavyweight. They’ll never forget it.

They weren’t the only ones to revel in this night, believe me. Fans worldwide haven’t seen a heavyweight fight with that much drama for a decade or more, perhaps going back to Lennox Lewis’ knockout of Mike Tyson in 2002. The division has been so devoid of action since then that some people probably wondered whether it would ever become interesting again.

And now this, a heavyweight war that was seen and undoubtedly appreciated by millions worldwide. Boxing had a big night.

The rematch: Klitschko says there was a rematch clause in the contract, Joshua indicated he was open to a second fight (saying “it’s up to him”) and the fans definitely would love to see it after the first installment.

Klitschko, who has been fighting professionally for more than 20 years, wants to give his future some thought. The two-time champion proved he can still fight but the events of Saturday undoubtedly took a physical toll on him.

Could he possibly duplicate his strong performance in a second fight? I doubt it. We might’ve seen the very best of this version of Klitschko on Saturday, which means a rematch might not go well.

And there is the cut above Klitschko’s left eye, which was deep. That will take some time to heal.

As for Joshua, he has other options. A showdown with Fury – which truly would determine the best heavyweight in the world, apologies to Deontay Wilder – would rival Joshua-Klitschko in magnitude and profits. There’s Wilder, who would make for a big event on either side of Atlantic.

Joshua also could opt for a relatively easy fight his next time out and go big again in the following fight. A gimmie would produce nice profits but probably would put the brakes on the momentum he created Saturday, which could a mistake. I hope he doesn’t go this direction.

No matter what happens all eyes will be on Joshua. He’s in an excellent position.

Two other British fighters – Scott Quigg and Luke Campbell – had big nights, as did Irishwoman Katie Taylor, on the Joshua-Klitschko card. Quigg (33-1-2, 24 KOs) outpointed Viorel Simion (21-2, 9 KOs) to earn a shot at countryman Lee Selby’s IBF featherweight title. A victory would allow Quigg to regain the status he lost when he was beaten by Carl Frampton, although he’ll have his work cut out. Selby might be as good as anyone in the division. Campbell (17-1, 14 KOs) maintained his momentum by stopping an overweight Darleys Perez (33-3-2, 21 KOs) in a WBA lightweight eliminator, which means the 2012 Olympian’s first title shot is around the corner. And Taylor (5-0, 3 KOs), a 2012 gold medalist, had the opportunity to display her special skills in front of the huge crowd. She stopped Nina Meinke (5-1, 2 KOs) in seven rounds. … Slick lightweight Tevin Farmer (25-4-1, 5 KOs) is a good story. He started his career with a record of 7-4-1 but is has won his last 18 fights, including a unanimous decision over Arturo Reyes (19-8, 5 KOs) on Saturday in Philadelphia. Farmer is rated in the Top 10 of three of the four major sanctioning bodies. A title shot is near. …

The Chavezes got the better of the Alvarezes exactly a week before Canelo Alvarez faces Julio Cesar Chavez Jr. in Las Vegas. Omar Chavez, also the son of the Mexican legend, knocked out Canelo’s brother Ramon Alvarez in the second round Saturday in Chihauhua, Mexico. Chavez (36-3-1, 24 KOs) was pounding Alvarez (24-6-2, 16 KOs) relentlessly when the referee stopped the fight. Ramon Alvarez outpointed Omar Chavez in 2014. … Esteemed colleague Martin Mulcahey thinks Donnie Nietes is “the most undervalued boxer in the sport.” He might be right. Nietes (40-1-4, 22 KOs) defeated Komgrich Nantapech (22-4, 15 KOs) by a unanimous decision to win the vacant IBF flyweight title Saturday in the Philippines, which gives Nietes major titles in three divisions. Nietes, 34, hasn’t lost a fight since 2004. He deserves recognition as one of the best in the business. … Carlos Zambrano entered the ring to face Claudio Marrero on Saturday in Las Vegas with a perfect record and a bright immediate future. That all changed by the time he left it. Marrero (22-1, 16 KOs) needed only 90 seconds to stop Zambrano (26-1, 11 KOs) with a single left hand, giving the Dominican what the WBA calls its “interim” featherweight title.