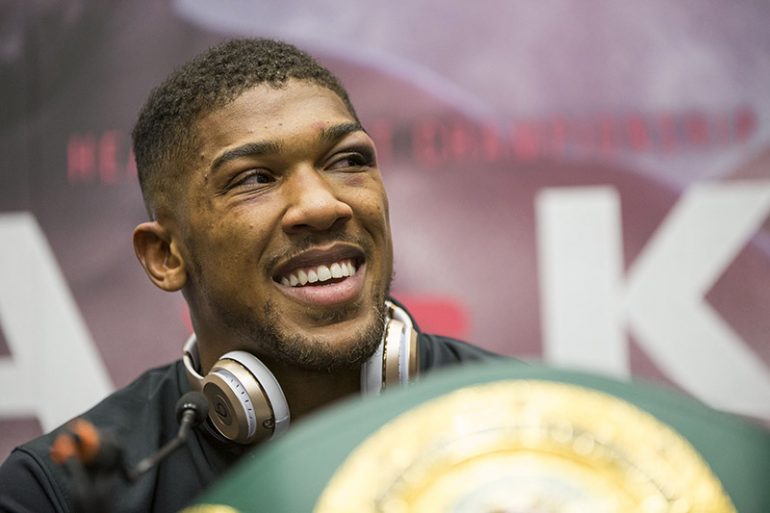 Much had been made of the fist-bumps and the winks and the private jokes and the big-bro-little-bro dynamic between Anthony Joshua and Wladimir Klitschko ahead of their world heavyweight title fight this evening (April 29) in London. Too friendly, they said. Too respectful, too boring, they said.

But any fear this civility and decency would amount to a game of rock-paper-scissors rather than a championship prizefight was put to bed the moment Joshua and Klitschko decided to trade hard punches in the middle rounds of an incredibly dramatic encounter that culminated in the Briton retaining his IBF title (and claiming the vacant WBA title) with an 11th-round stoppage victory. 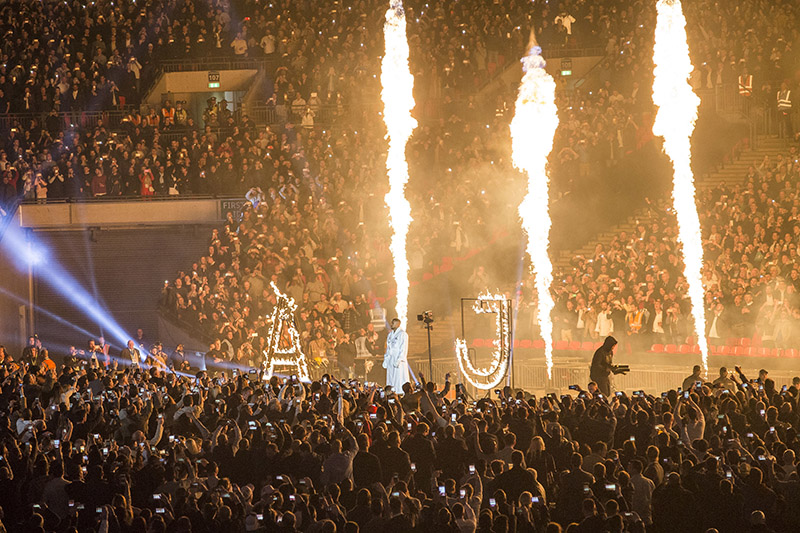 The 90,000 fans – yes, ninety thousand – packed inside Wembley Stadium, England’s national soccer ground, turned up hoping, nay, expecting a blowout, a changing of the guard and the coronation night for their new fighting hero. What they got, however, was so much more. What they got was the type of event to make headline news and grind an entire nation to a standstill as well as the type of fight to restore one’s faith in the long moribund heavyweight division.

Took a while, mind. This was, admittedly, a classic of the slow-burning variety. Joshua, with his 100 percent knockout ratio, and Klitschko, with his 79 percent knockout ratio (from 64 fights, for context), seemed destined to send 90,000 spectators home early. Yet, spectacles such as these – grandiose in scale and importance – have a curious habit of flooding the bodies of two athletes with excess nervous energy and subsequently rendering even the most aggressive of men tentative and wary of putting a foot wrong.

Which is why four rounds of this high-stakes, ballyhooed matchup consisted of Klitschko taking the center of the ring, Joshua circling around him, and both poking and prodding with jabs and occasional right hands. It was respectful stuff. Aware of the repercussions of one false move, both were on their best behavior. If this was the courting period of some great romance, the pair were keeping their cards close to their chest and exhibiting admiration through their restraint. It was, taken further, all pick-up lines and no second base. 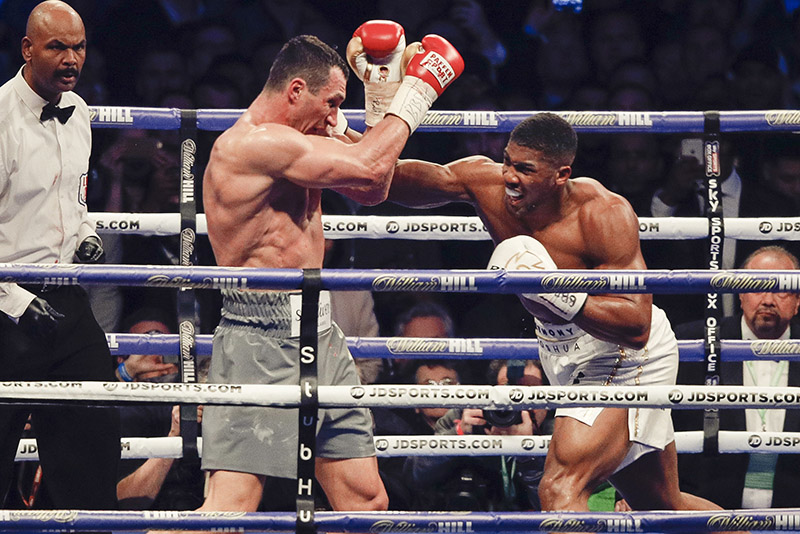 Concerned by the way Klitschko had taken to marshaling the center of the ring and snake-charming him behind his low left hand, Joshua came out blazing to begin the fifth. He threw a combination, cuffed Klitschko around the top of the head and immediately sensed he’d made some sort of breakthrough. He then watched as Klitschko struggled to retain his form. He could see his legs were unsteady. More shots followed and this moment of mayhem was prolonged until Klitschko hit the deck for the first time in the contest.

It had all been so abrupt, so unexpected. Klitschko, up to that point, had appeared comfortable. Comfortable both with the surroundings – football stadium fights are, lest we forget, familiar to him – and comfortable, also, with the sight of Joshua doing what hardly comes naturally to him, which is to say giving ground and boxing on the back foot.

Now, though, Klitschko was down. Not only that, he had on his face the same look of bewilderment he had when hauling himself off the floor against the likes of Corrie Sanders and Lamon Brewster way back when. Caught in a storm, he needed to regain his faculties, his composure and then, finally, his form. 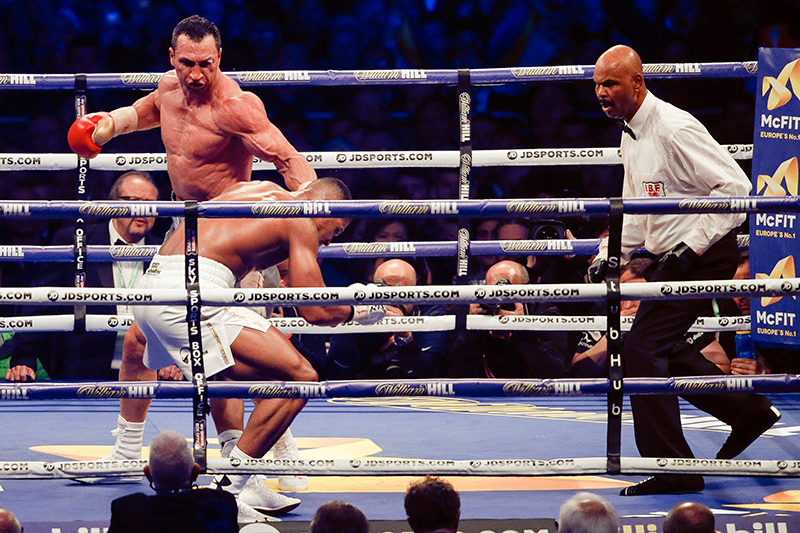 Klitschko, to his credit, did all three. He weathered this initial storm not by cowering or retreating or even trying to survive, but by throwing punches with Joshua and trying to connect with wild hooks in between the raids of a young champion certain he was on the cusp of victory. This approach, one totally unexpected, gave the frontrunner something to think about. It made him less inclined to just let his hands go with abandonment. It, this desire to fight fire with fire, was also so uncharacteristic of Klitschko.

Perhaps initially viewed as a ballsy last stand, Klitschko then started to reap the rewards in the second half of the round after noticing Joshua had punched himself out, depleted his energy resources and was a sitting duck for right hands, uppercuts and left hooks, punches Klitschko threw in a way he hasn’t done for years.

The disappointment of not finishing Klitschko coupled with the tiredness that stemmed from not being able to do so meant Joshua cut a forlorn figure to end Round 5. He’d won the round. That was never in doubt. But he’d also somehow finished it with his back against the ropes, taking shots, and witnessing a 41-year-old he believed was on the brink of being stopped now finding his range and his groove and popping punches like the Klitschko of old. 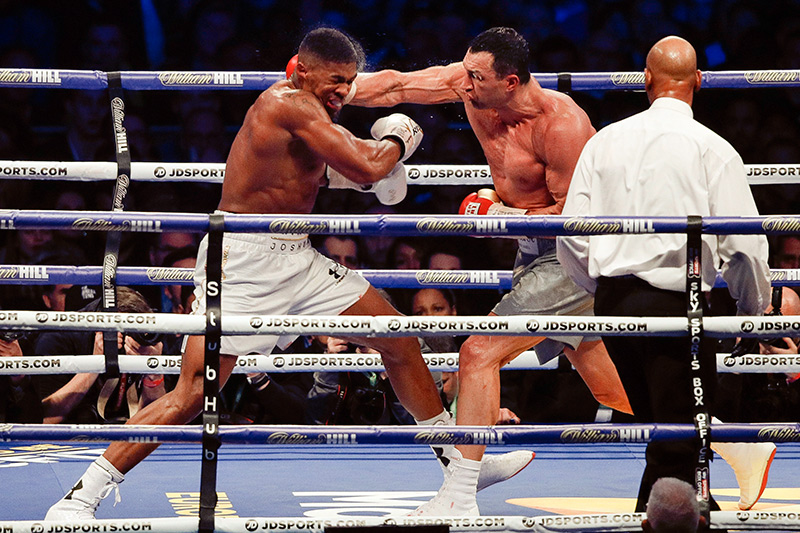 The palpable unease at ringside, as a consequence of this turn, was only exacerbated in Round 6 when Klitschko, by now moving, feinting and posturing just like he did during a nine-year reign as heavyweight king, lined Joshua up for a right hand and let it go. He let it go, this punch, because his back was against the wall and he had no alternative option. He let it go for all those other times in the past when he second-guessed himself and refused to let it go. He let it go most of all, though, because he felt Anthony Joshua, the so-called savior of the heavyweight division, had produced his best work, flunked the exam and was now ready to be taken.

Off it went, then, that patented right hand, and the result of the punch was every bit as dramatic as it was inevitable: Joshua, caught on the sweet spot, knocked down to the canvas for the first time in his previously immaculate four-year professional career.

“AJ,” the golden boy, the primary reason for this new golden age of British boxing, shook his head clear and beat the count. He was then promptly lined up for more of the same. More punches, more punishment. So he clinched. He held on. He momentarily beat Klitschko at his own game.

It was a respite short-lived. Klitschko, fully in control, cracked Joshua with another right hand by the ropes and was now positioning him the way he had positioned many of his impotent title challengers down the years. He was doing a lot with very little; the mere threat of what was to come was often enough to maneuver his prey.

Indeed, by Round 7, Klitschko had taken full ownership of the center of the ring to such a degree that it could very well have been a snapshot from any one of his world title wins; there he was bouncing ever so slightly, his left hand low, often waved like a magic wand, with all his weight on his front foot, seemingly ready to uncoil his hook. It was retro Klitschko. Classic Klitschko. Joshua knew it, too. He was back to paying his respects. He pushed his jab, if only to offer something, and appeared content to just move, keep away and stay upright.

There was a feeling that by Rounds 8 and 9 the duo had got it out of their system. The nervous energy, the pretense, the tease. They’d both visited the canvas before a crowd of 90,000. They’d both been hurt. And with this realization that you’ve given all you have and presumably seen and experienced all you want to see and experience, there comes a slight lull. It’s then things are liable to get messy. Clinches ensue. Rounds start to drift by. Unofficial scorecards, those things deemed redundant at the start, are now suddenly being tallied. You know, just in case. 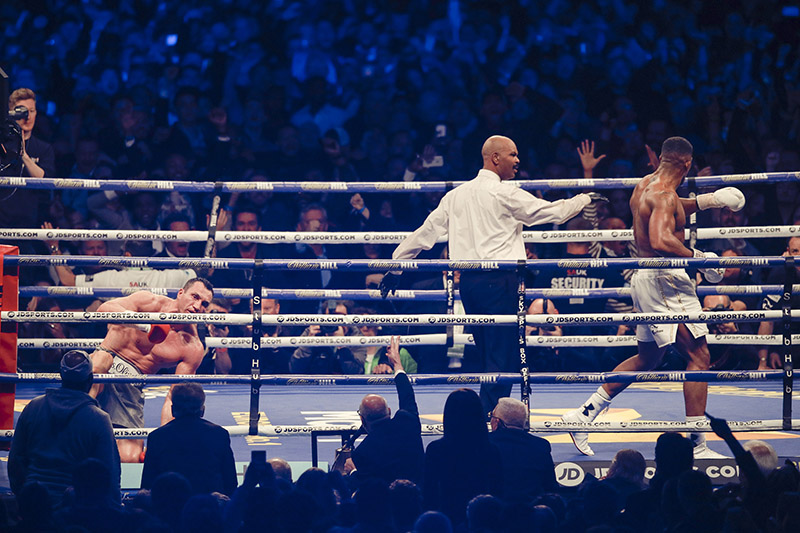 Joshua had eaten a short, hurtful right hand in the closing stages of the 10th and, though the round had been close, may well have believed it to be a round he lost in a fight he also suspected was still up for grabs heading to the finish line. This, at least to me, is the most logical way of explaining why Joshua might have decided to start Round 11 with such vivacity and purpose and why, for essentially the first time in the fight, he made a point of striding to center ring and staying there. Ostensibly a power move, it immediately took Klitschko out of his comfort zone – had him back-pedaling on tired legs, in fact – and, lo and behold, it wasn’t long before Joshua did the very thing countless other Klitschko opponents had promised but ultimately failed to do: He bravely attacked the giant Ukrainian with designs on breaking the spell and putting him away.

As they traded punches, a trade initiated by the Londoner, a hellacious uppercut landed on Klitschko’s chin, triggering whiplash, and, just like that, momentum shifted yet again. Klitschko immediately looked disturbed by the power and the shot’s element of surprise and shortly after was bundled to the ground over by the corner. 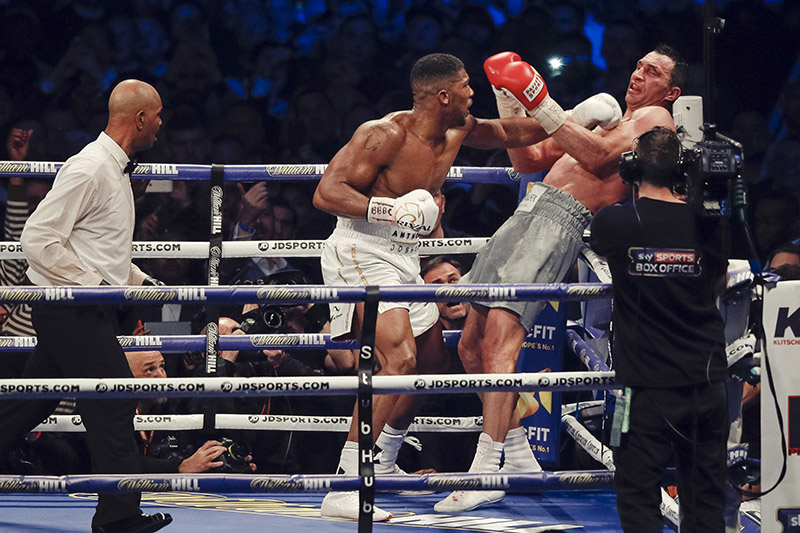 He beat the count and signaled his willingness to continue, but, at the restart, Joshua was back to clubbing punches in his direction, caring less about where they landed and more about simply capitalizing on this moment; an uppercut thrown mid-combination had the same impact as the first one and Klitschko was once again downed, this time on his back.

The image of the end many had forecast (albeit earlier in the contest), Klitschko, 64-5 (53 knockouts), nevertheless climbed to his feet for a second time, tried to escape and tried to spoil. But, alas, it wasn’t enough. Joshua continued his assault and wasn’t going to stop until the referee, David Fields, saved an old man with an old, bloodied face from further pain, which he did, at the 2:25 mark, thus heralding the arrival of a bona fide new star of the heavyweight division.

Anthony Joshua, 19-0 (19 KOs), to summarize, is a 27-year-old Brit who repeated the success of another Brit, Tyson Fury, in toppling Wladimir Klitschko, and did so in a manner far less dominant yet wholly more entertaining. Better even than that, though, is the fact Joshua, unlike Fury, is a man with his eyes wide open, a man savage in the ring and savvy away from it, a man who won’t make a mess of this.

Rest assured, the heavyweight division is in safe hands. Powerful, exciting ones, too.