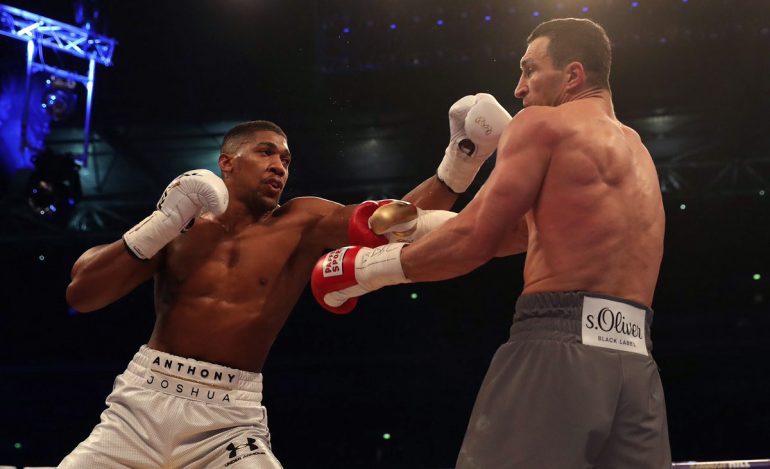 The torch was passed but not without Anthony Joshua getting burned a few times.

Joshua put 41-year-old Wladimir Klitschko down three times and stopped him at 2:25 of the 11th round in a dramatic  heavyweight fight before 90,000 Saturday at Wembley Stadium. 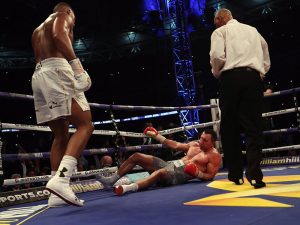 Joshua (19-0, 19 knockouts) started quickly and put Klitschko down for the first time in Round 5, when Klitschko was also cut above his left eye. Klitschko not only survived but fought back with spirit the remainder of that round and then put Joshua down with a straight right in Round 6.

Joshua looked spent at that point, as if he might not have the stamina necessary to finish the fight. As a result, Klitschko (64-5, 53 KOs) did well in Rounds 7 and 8.

Then Joshua seemed to be reenergized, as he picked up his punch rate and turned the tide back in his favor.

The ending was dramatic. It started with a right uppercut that hurt Klitschko, followed with a barrage of shots that put Klitschko down. He got up but went down again under another flurry. Once again, he got up. And once again, Joshua attacked. This time, referee David Fields stopped it to save Klitschko from taking further punishment.

Klitschko was fighting for the first time since he lost the RING championship to Tyson Fury 17 months ago.