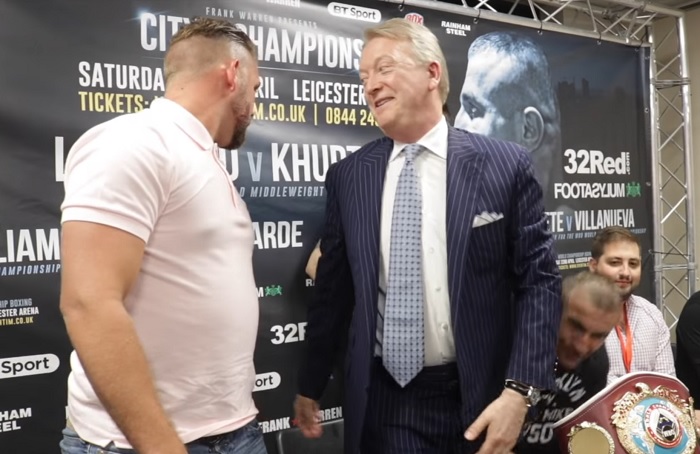 “He looked like he was 220 pounds at that press conference,” Khurtsidze adviser Keith Connolly said in a phone interview. “He looks like he should be on Weight Watchers right now. I wouldn’t use ‘big’ to describe him as the word. I would use ‘fat.’ Yes, I was surprised about how fat he was. To me it looked like he was well above 200 pounds.”

Khurtsidze won the interim WBO middleweight title with a sensational fifth-round stoppage of Tommy Langford on Saturday at Leicester Arena. He is now negotiating for a July 8 bout with Saunders. The two trash-talked on Saturday and Saunders, wearing a tight, pink polo shirt, looked as though he’s been enjoying his time off.

“That tells me he doesn’t really want to fight anymore,” Connolly said. “He’s just doing it to make a living and that his heart isn’t really into it. And that’s what happened at the press conference: He was trying to pump himself up, drum up some attention because he hasn’t really fought that much recently. He’s been ducking everybody and I wouldn’t be surprised if he claims to have an injury and pulls out of this fight because I think he’s scared of Khurtsidze.”