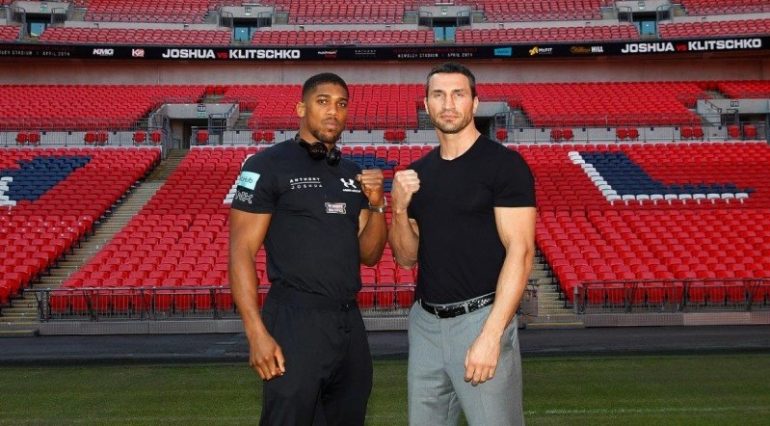 This Saturday, the hottest ticket in the world is not a sequel but a heavyweight remake.

Unbeaten British superstar Anthony Joshua will face Wladimir Klitschko in front of 90,000 fans at Wembley Stadium in London and there will be an enormous air of expectancy. Why? Because “Old Lion versus Young Lion” matchups almost always conclude with the passing of the torch. Time stands still for the new blood, whereas the clock speeds up for the faded veteran.

When Joshua, who is rated No. 5 by THE RING at heavyweight, turned professional in October of 2013, Klitschko was well into his second reign as heavyweight champion with 18 world title victories to his credit. One might have expected the legendary Ukrainian to have hung up his gloves by the time Joshua came calling for silverware but fate has brought the two fighters together four years later.

Klitschko, who is rated No. 1 by THE RING, due largely to past accomplishments, has been inactive for 17 months. The former champion was made to look hopeless by Tyson Fury, in November 2015, and a 12-round unanimous decision defeat, his first loss in 11 years, was a bitter pill to swallow. Now 41 years old, Klitschko insists his fires have been rekindled for this new challenge and he is “obsessed” with victory.

Joshua is (18-0, 18 knockouts) and the IBF titleholder (the vacant WBA belt is also at stake). The 27-year-old colossus has only been extended beyond three rounds on two occasions and his punching power has been simply devastating. There are, however, two questions the Londoner must answer in this heavyweight super-fight. Can he unleash his power on a world-class opponent? Can he absorb a direct hit himself?

By Sunday morning, we will have all the answers but this would seem like an appropriate time to review history. In the following  five fights, you will come across unbeaten fighters, like Joshua, who were still carving out their legacies. You will also come across former champions, like Klitschko (64-4, 53 KOs), who returned from long periods of inactivity in the hope of reclaiming lost honors. Joshua-Klitschko is not a unique script; the players are just different. 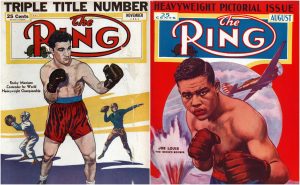 Around 17,000 fans made their way to the mecca of boxing to watch the legendary Joe Louis take on rising star Rocky Marciano in a 10-round non-title bout. Louis had retired in 1949 following an incredible 11-year heavyweight title reign, which included 25 successful defenses (still a record). Tragically, however, the great former champion was forced back into the ring because the U.S. government saw fit to chase one of its country’s most beloved sporting heroes for back taxes. On his return, Louis had lost one title fight to Ezzard Charles in September 1950, and although he’d won eight bouts in succession, “The Brown Bomber” was a shell of himself. The 28-year-old Marciano was 37-0 (with 33 KOs) and what he lacked in finesse, “The Rock” more than made up for in terms of power, brute strength and underrated in-fighting skills. After a slow start, Louis got the jab going but Marciano punished him up-close with minimal effort, while Louis attempted to fight off him off with maximum effort. A left hook lead decked Louis in the eighth and a pulverizing right knocked the great man through the ropes and into permanent retirement. “The reactions were not there. My age counted against me,” said the 37-year-old Louis, who never fought again. Marciano was moved to tears and took no pleasure in victory. 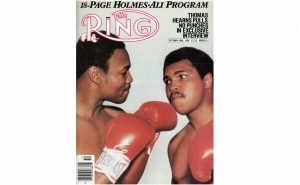 Following two years in retirement, Muhammad Ali returned in a bid to capture the heavyweight championship of the world for a fourth time. In the opposing corner was his former sparring partner, Larry Holmes, who was making his eighth WBC title defense. If both men had met at their peaks, this would have been a fight for the ages. Instead it was a gothic horror story. The 38-year-old Ali was talking slower in interviews and sparring partners were swatting him around effortlessly in Sin City. Still, a pro-Ali crowd chanted his name and prayed for one more miracle. But the glory days were over. Within seconds, the 31-year-old Holmes was teeing off with lightning quick punches and Ali had no response. That vast reservoir of courage proved to be his greatest liability as round after round, he slowly rose from his stool to absorb a fearful pounding. Ali didn’t land one meaningful punch and Holmes, who was in his prime, became almost reluctant to hit the target. Angelo Dundee pulled Ali out at the end of the 10th-round and put an end to one of the most horrible spectacles in modern boxing history. It was the only stoppage loss of Ali’s career. Like Marciano before him, Holmes was moved to tears during his post-fight interview. 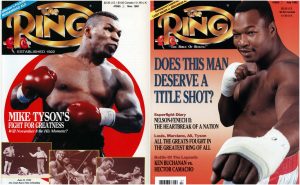 What goes around comes around. Holmes, who had proven himself to be one of the finest heavyweight champions in boxing history, was now in Ali’s position. He was 38 years old, inactive for two years and was going in against a brilliant young fighter at the peak of his powers. Tyson was unbeaten, unparalleled and the undisputed heavyweight champion of the world. The older man was savvy enough to avoid serious bombs for the first three rounds but Tyson was gradually closing the distance. Suddenly, a thunderous right hook to the head decked Holmes in the fourth and the former champion was seriously hurt. Again, like Ali, Holmes had incredible powers of recovery and there was not one ounce of quit in the veteran warrior. He bravely got to his feet but Tyson decked him twice more with right hands and the fight was stopped immediately following the third knockdown. “If (Holmes) was at his best, I wouldn’t stand a chance,” said the 21-year-old Tyson, when interviewed by HBO afterward. Holmes would fight for the title twice more, losing on points to Evander Holyfield and Oliver McCall. This was the only stoppage defeat of his career. Tyson defended his titles on four more occasions before losing to Buster Douglas in a monumental upset. 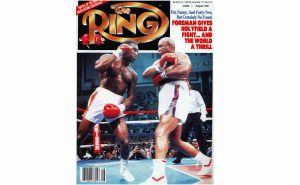 When George Foreman ended a 10-year-layoff to return to the ring in 1987, he was viewed as nothing more than a novelty act. The hard-hitting Texan was over-the-hill, overweight and only a Hall of Fame resume from yesteryear separated him from the kind of ridicule that would later be afforded Butterbean. But “Big George”, now a Christian minister, was deadly serious and his message was clear: “O ye of little faith”. Foreman retained his destructive power and had forgotten more about fighting than most active heavyweights would ever know. He proved that by knocking out 24 of them, 23 inside the distance, before earning himself a title shot at 42 years of age. Holyfield had established himself as the greatest cruiserweight ever and was now obsessed with creating a legacy at heavyweight. He had knocked Douglas out to win the championship and Foreman’s name recognition and backstory made his first title defense a financial bonanza. In the ring, however, this one became a fight. Holyfield was unquestionably the better man but Foreman pressed him hard. The former champion frequently knocked his opponent off balance with massive single shots and soaked up everything Holyfield had to offer. “This was a victory for everyman, whether they’re 40, 50 or 60,” Foreman told HBO afterward. 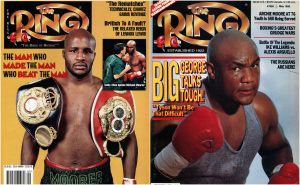 Result: Foreman wins via 10-round KO

Foreman was now 45 years old and going up against an unbeaten heavyweight champion who was 18 years his junior. Fight fans held their breath and expected the worst. Moorer was an enigmatic, highly-competent and hard-hitting southpaw from Brooklyn. He’d started his career as a light heavyweight, captured a WBO title in only his 12th fight and defended it nine times. Moorer then moved up to heavyweight and defeated Bert Cooper for a WBO title, before comfortably outpointing Holyfield to become the first recognized southpaw heavyweight champion in boxing history. Despite Foreman’s advancing years and a 17-month layoff, he remained a major cash cow within the industry. The ancient former champion would be easy money and easy pickings for Moorer, who was looking for an easy title defense. And that’s just the way it looked through nine rounds – easy. Moorer peppered the veteran with snappy punches and took next to nothing in return. Foreman’s face was badly swollen and he got slower and slower as the bout progressed. Suddenly, in Round 10, a one-two from Foreman got Moorer’s attention and the same combination, aimed lower, caught him flush on the chin. Moorer went out like a porch light. Two words from HBO’s Jim Lampley summed up one of the most memorable moments in sporting history perfectly: “It happened!”

The game has changed over the years but a lot of things remain the same. The vastly experienced Klitschko, past his prime, meets a hot young fighter in Joshua who is only just approaching his. Can the future Hall-of-Famer turn back the clock or will the younger man’s thunderous punching and the laws of physiology prove too much to overcome? A Hollywood ending beckons for the winner.

Tom Gray is a UK Correspondent/ Editor for RingTV.com and a member of THE RING ratings panel.  Follow him on Twitter: @Tom_Gray_Boxing.