Deontay Wilder offers himself as replacement to face Parker 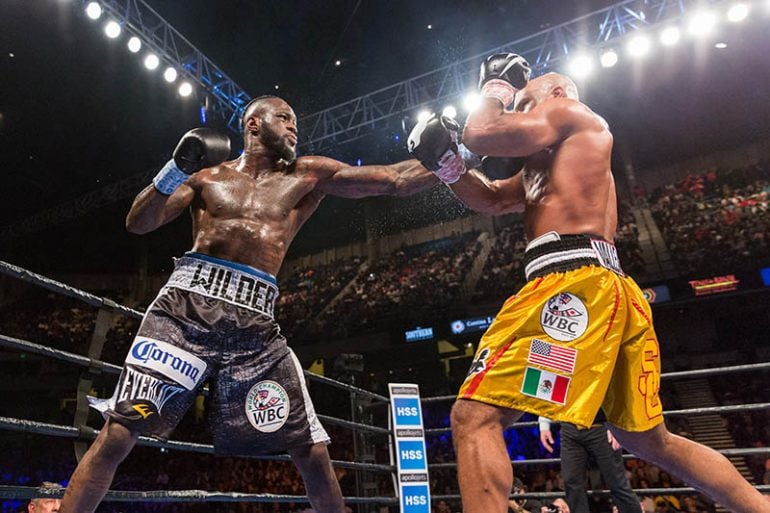 Deontay Wilder has an easy solution for Joseph Parker, who is searching for an opponent after Hughie Fury pulled out of their heavyweight title fight on May 6 with an injury. The way to fix the problem? Make a heavyweight unification bout between Parker and Wilder in July.

“I want to get Parker,” Wilder said on a conference call on Monday that was arranged to coincide with Anthony Joshua’s heavyweight championship with Wladimir Klitschko on Saturday, live on Showtime. “Parker ain’t got no opponent right now. I’m fresh. I’m ready and what would be better for me and Parker fighting for the unification and then after that you have another unification (with the winner of Joshua-Klitschko), winner takes all at the end of the year. And then in 2018 you start out fresh. It’s exciting right now, the heavyweight division.”

Wilder (38-0, 37 knockouts) suggested that officials are working behind the scenes to try and see if a fight with Parker, who has the WBO title, can be made. “It definitely can happen,” Wilder went on. “My people have been on it day and night. I think it’s going to be up to Parker’s side to agree to doing the fight. We can renegotiate and make this fight even bigger. It can be way bigger than this Fury fight.”

Wilder, who holds the WBC title, said a fight with Parker makes sense for the summer. “I want Joseph Parker in July,” Wilder said. “Why not? He doesn’t have an opponent right now. Let’s unify the division. This is the perfect time. Let’s make it happen. You don’t have an opponent. I’m fresh. All the other guys — they’re busy. And now you got the WBC champion available? It’s easy.”

Wilder hopes he doesn’t have to fight his mandatory Bermane Stiverne again after he won a decision against him in 2015 for the WBC heavyweight title. The WBC ordered for Wilder and Stiverne to start talks for a fight in February but Wilder thinks it’s a bad idea. “I have no interest in that fight whatsoever,” Wilder said. “I don’t even see how that fight could possibly happen right now. I would have rather seen him fight King Kong Ortiz for an eliminator for me. Bermane Stiverne will never be the same (after he fought me). If someone wants to see something bad happen in this sport like a death, that going to be the fight that’s going to happen. If you put me in the ring with him again, it’s going to be blood on somebody’s hands because I ain’t having no mercy. But I hope they give him an eliminator first before they give him to me. I’m too fresh.”