Oscar Valdez: ‘I’m the best featherweight in the world’ 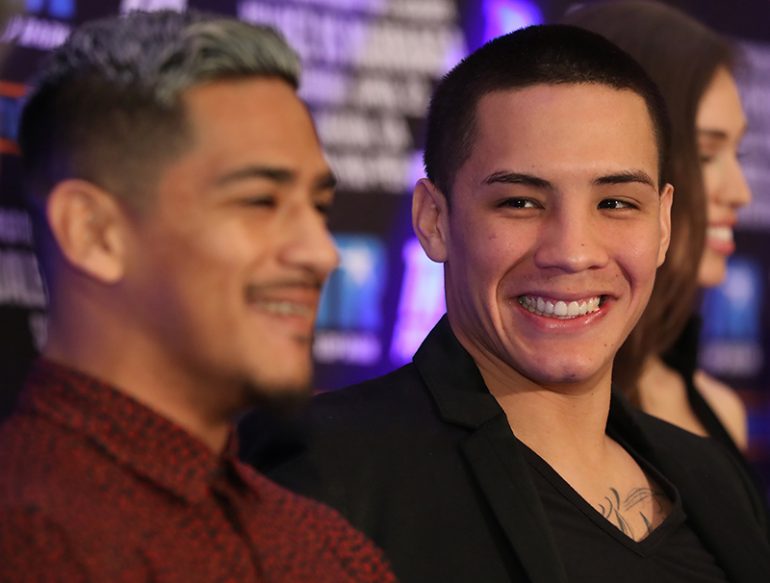 Oscar Valdez, a consummate fighter, does not have an off button. The 26-year-old never has to be reminded about showing up on time to The Rock Gym for training.

That discipline and structure has taken him from prospect to WBO featherweight titleholder in a span of a few years. Now he hopes to collect all of the world title belts and become the king of the 126-pound division.

Before that happens, Valdez needs to make a mandatory defense of his strap on Saturday night against Miguel Marriaga at the StubHub Center in Carson, California.

Valdez (21-0, 19 knockouts) last fought on Nov. 5 in Las Vegas, stopping Hiroshige Osawa in round seven. It was his fifth consecutive knockout win.

The Marriaga fight will mark the second time he will defend the WBO title. Marriaga (25-1, 21 KOs) earned a shot at the title when he stopped Guy Robb in an elimination bout on Aug. 27. The fighter from Cartagena, Colombia has won his last five bouts since suffering his only defeat at then-featherweight world titleholder Nicholas Walters in June of 2015.

The Marriaga fight is a dangerous fight for Valdez but the two-time Mexican Olympian believes he can defeat a worthy challenger.

“He’s just a fighter,” Valdez told RingTV.com at a recent open workout. “He’s the toughest opponent I’ve faced. I studied all my opponents and I’ve pictured my opponents – Chris Avalos, (Evgeny) Gradovich – fighting Marriaga but Marriaga beats them all. That’s why I think he’s my toughest opponent (thus far). He carries a big punch but he doesn’t depend on one shot. He has a lot of experience and he was a solid amateur.”

Valdez, who is originally from Nogales, Sonora, Mexico, has developed a reputation of always being at the gym. His handlers, including manager Frank Espinoza, have told him to dial it down, especially with the amount of sparring at the gym.

But anything that is said seems to go in one ear and out the other. It is not a bad thing but one wonders whether Valdez can keep this regimen of constant workouts, including some Sundays. Valdez has the attitude of if it’s not broken, why fix it?

“Right here in California, I have nothing else to do,” said Valdez, who signed with Top Rank Promotions before his pro debut. “My house and family are in (Nogales, Sonora) Mexico and I’m here and I train. On a Sunday, I’d rather train because I have nothing to do. We get good results because all we do is train. I don’t go out to eat or to movies. All the fun stuff is back home.”

It is that attitude of being a perfectionist that motivates Valdez. That and attempting to become the best fighter in his weight class and, one day, assuming the title of being the best Mexican fighter.

“I have a lot of pride in what I do. I’m very proud to be Mexican. To be able to carry my flag and my people, it means a lot to me. I’m grateful for the fans here in the United States. I wasn’t happy with my performance at the StubHub Center (when I fought Ruben Tamayo in June of 2015). People weren’t happy with my performance. This is my second chance to put up a good fight. Based on Marriaga’s style, I know it’s going to be a good fight. I know I’m going to make it a good fight.

“I want to make it clear to that I’m the best featherweight in the world. I want my belt to mean something. Other featherweights that call themselves world champion bugs me.”

Valdez could look to fight in a unification bout later this year or next year. An impressive performance over the tough Marriaga could bring a significant bout in the near future. However, while Valdez is the favorite, he is not overlooking Marriaga.

“I can’t take this fight lightly. I know he’s going to go in there and try to take my belt away but I have to do what I have to for him not to do that.

“I live by the moment. I want to prove to myself how great I could be.”