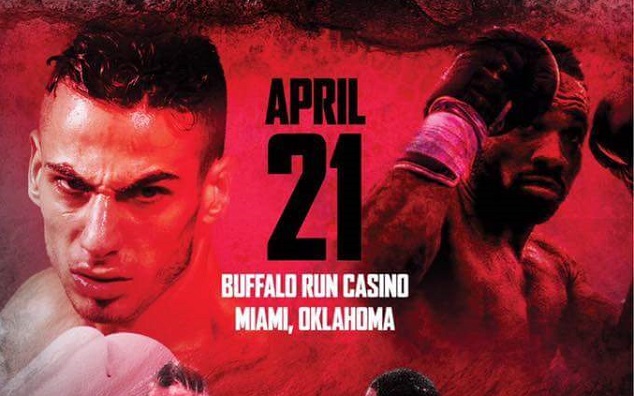 The 10-round bout will take place at the Buffalo Run Casino in Miami, Oklahoma.

The 27-year-old Dib, who is ranked No. 7 by the WBO at 130 pounds, won an eight-round unanimous decision over Carlos Padilla in his most recent bout on Dec. 10. Dib has won his last 12 bouts.

Evans’ most notable bout occurred in April of 2012. In a clash of unbeaten junior lightweights, the 28-year-old Evans (18-1, 14 KOs) lost by TKO to former 130-pound beltholder Javier Fortuna in one round.

Since then, the Cleveland resident has only fought twice, both stoppage victories against overmatched opposition in 2015.

Also fighting tonight will be 2016 U.S. Olympian Charles Conwell, who will be making his professional debut against Jeremiah Page (3-3, 2 KOs) in a four-round middleweight bout. Conwell, who is managed by David McWater, signed a promotional contract with Lou DiBella and Tony Holden.

The fight is a rematch of their majority draw on Sept. 23.

Morrison, who resides in nearby Tulsa, is the half-brother of unbeaten heavyweight prospect Trey Lippe Morrison. Both fighters draw a significant following in the area.