Michael Perez gets off canvas to outpoint Marcelino Lopez 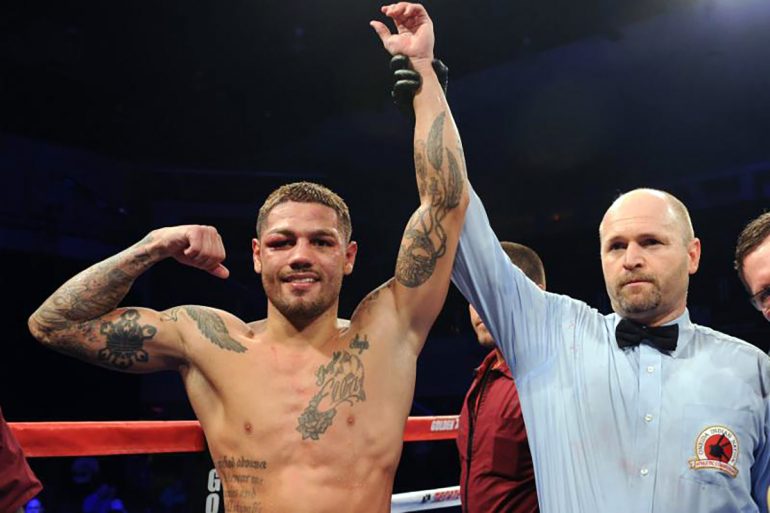 Michael Perez survived a knockdown to win a split decision over Marcelino Lopez on Thursday at the Turning Stone Resort and Casino in Verona, New York.

The 10-round bout was a crossroads clash between Perez, who was coming off a knockout loss to Petr Petrov on Sept. 30, and the Argentine-born Lopez. 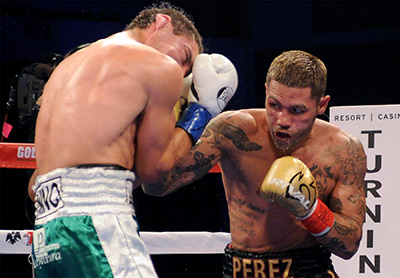 Perez took the initiative from the opening bell, beating Lopez to the punch with combinations to the head. By the fourth round, Lopez, who was fighting for the first time in over 18 months, began to find a rhythm, successfully finding a home for repeated right hands to the head of Perez.

Lopez began scoring with left hooks to the head of Perez in the middle rounds. A counter hook dropped Perez early in Round 8, but the Newark, New Jersey resident was not visibly hurt from the knockdown.

Despite having to deal with a swelling over his right eye, Perez was busier in the final round, looking to score with counter right hands to the head.

“I won the fight for sure,” said Perez after the fight. “My plan was to go in and box him, and work him with my jab. I knew I won, but know I could’ve been better if I had more rest before. Next time I fight, I’m going to (be) the best I can be.”

Thursday night was Perez’s first bout as a junior welterweight in over two years, having campaigned as a lightweight in his last three bouts. Perez is now being trained by Philadelphia-based trainer Chino Rivas after training with Robert Garcia for the last three years.

In the co-feature of the ‘Golden Boy Boxing on ESPN’ telecast, welterweight prospect Rashidi Ellis remained unbeaten with a 10-round majority decision over John Karl Sosa.

Ellis was coming off an impressive first-round knockout of Eddie Gomez on Dec. 16. Sosa, who resides in Caguas, Puerto Rico, entered the bout having lost his last two bouts. 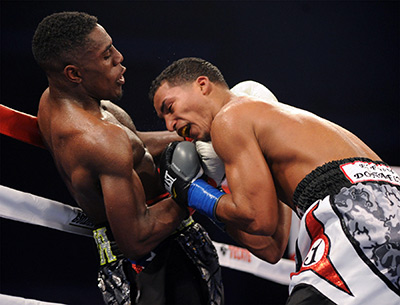 Rashidi Ellis leans a right uppercut to the jaw of John Karl Sosa while being pressed to the ropes during their hotly contested welterweight bout on April 20, 2017. Photo / Tom Hogan-Hoganphotos / Golden Boy Promotions

Sosa stunned Ellis in Round 2 with a right-left combination to the head. Ellis was able to weather the early barrage from Sosa, utilizing his speed to outbox and outland Sosa over the next several rounds.

Ellis began to slow down by Round 8. Sensing he was down, Sosa began to close the distance, scoring repeatedly to the head of Ellis, who was fighting for the first time past the eighth. While Sosa was the aggressor during the final three rounds, Ellis had done enough to grind out a decision.

One judge scored the bout 95-95, while the other two judges score the bout 97-93 in favor of Ellis, who resides in the Boston area.

– Light heavyweight Vyacheslav Shabranskyy (18-1, with 15 KOs) rebounded from his knockout loss to Sullivan Barrera on Dec. 16 to knock out Larry Pryor (10-16, with 5 KOs) at 54 seconds of the second round.

– In the opening bout of the Golden Boy Promotions card, Jimmy Garcia (5-0, with 3 KOs) knocked out Albert Tully at 1:46 of the first round. Tully was making his pro debut.