Did Klitschko gain an edge over Joshua on ‘The Gloves Are Off’ show? 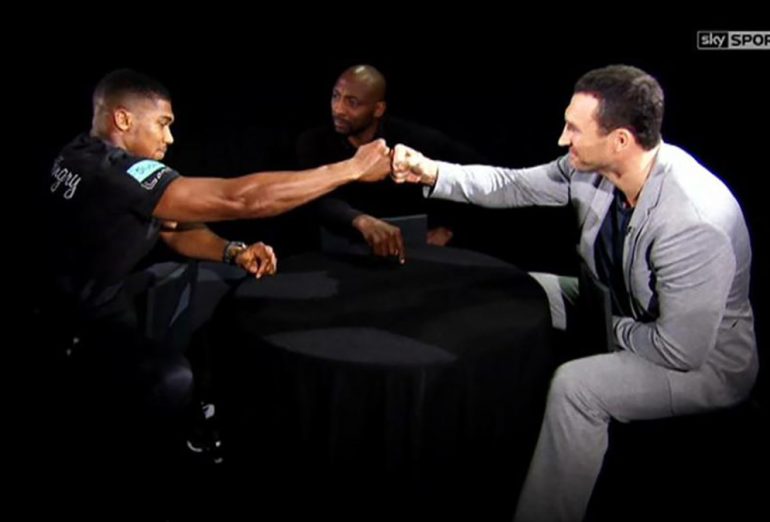 Most folks I talk to are liking Anthony Joshua to conclusively put into effect a changing of the guard and wrest the baton of heavyweight supremacy from Wladimir Klitschko when they face off at Wembley Stadium in England on April 29.

Some holdouts, though, are liking what they are seeing and hearing from Kltschko, the 41-year-old Ukrainian-born boxer who in his last outing, versus Tyson Fury, seemed to have turned old and viciously inefficient overnight.

The long and tall hitter, who with the help of Manny Steward re-fashioned his fighting self to protect a chin that failed when tested and became a safety-first, risk-averse pugilist/grappler, has been advertising that he is #obsessed, totally taken with roaring back to life as a fighter, and showing the young gun that age is but a number, and not a hindrance if one is mentally on point.

I searched the program “The Gloves Are Off,” a half hour Sky Sports production, to see if I could discern any hints or tells that will help me get a better sense of what will unfold in the Matchroom promotion, which will screen live on Showtime. (HBO will show it later that night, on delay.)

IBF champ Joshua took the first query from host Johnny Nelson, an ex-cruiserweight ace who left the ring in 2005. Klitschko’s eye bore in on Joshua, three and a half feet away from him, at a table.

Joshua said experience is great, but this is a young man’s sport. Then Klitschko took the mic. As he has been doing during this promotion, he re-framed the issue, the mood, signaling that he is the boss. The mood is like that of a funeral, he cracked, and then he smiled. “Anticipation,” he said, will be the key, on how to show this younger upstart the true rules of the ring.

Again, the eye s… Klitschko’s stare is A-grade and far superior, on surface, to the less seasoned tangler. He has maybe been helped by his association with his wife, the American actress Hayden Panettiere,  because he has improved as a performer, as a modulator of his voice and inflection and timing.

This all probably has nothing to do with what will happen in the ring, though. Joshua’s face as he watches and listens to Klitschko looks less hard, less sure, more searching.

“I needed someone who could potentially challenge me … Is this the challenge? We’ll find out April 29,” the Brit said, correctly noting that no one knows what will play out.

Klitschko too has been saying that no one knows till fight night what will happen. He’s confident but not pretending to be omniscient.

“The true challenge … for the fan’s point of view, is Joshua-Klitschko, hands down,” the elder man said. He’s smartly been playing up the immensity of this event, and skillfully building anticipation.

Klitschko was asked about losing to Fury. He took it well in stride, cracking that the host is older than he. He said that the loss wasn’t all bad, as it allowed him a long layoff, allowing him to recharge. The negative is also a positive, he philosophized.

The topic of obsession came up. Joshua said he became more obsessed after he beat Dillian Whyte (December 2015) but he didn’t like his performance.

Nelson spoke of the Wembley setting, the pressure, 90,000 watching intently on-site. Joshua said he will rely on his experience. The older man said the London setting could be a home-field advantage. But there is more pressure … “I don’t want to be in AJ’s skin right now,” Wlad stated.

Joshua has in the past worked as Wlad’s sparring partner. Will he have trouble shaking off a master/student setup? Joshua, who worked with him before the then-champ fought Kubrat Pulev in 2014, said that he will just be there to fight, won’t be lost in an old construct.

Wlad was asked how he’d beat AJ. The kid has a “good analytic mind,” and a superb physique and good power. “There’s a lot of equal things,” he said. “It’s a copy, in a certain way. I’m obsessed with my goal to raise my hands after the fight and leave the ring as the winner.” They share that obsessed feeling, he said. He will seek to find the weakness in the younger man, and exploit it.

Could there be a stoppage? Never know, said Wladimir. When he fought Samuel Peter, the first time, in 2005, people declared he was a “dead man walking” pre-fight. He got knocked down three times during … and then won the decision. So, who knows, till they know. AJ, can he KO Wlad? “I’m going for a knockout,” he said, and then the men bumped fists, showing a high level of collegiality between them.

Nelson asked Wlad how he’d seek to mesmerize AJ. “I will show it in the ring,” Wlad said. No tips for the scouting report, there.

Nelson said AJ seems calm and cool and an analyzer. “Does this bother you at all?” Nah, he likes it, the older man said. He likes the sportsmanship they share. He lauded AJ for being committed to the sport and a credit to the sport. The “I will eat your children” talk is whatever, he said.

Near the end, AJ interrupted Wlad, and Klitschko took the reins. “Just one second … If you win, I will congratulate you, when you lose, I will help you to come back,” Wlad stated.

If he doesn’t win? Is that the end? AJ isn’t contemplating it. “Don’t think about it,” Wlad said, helping the kid out. He doesn’t perseverate on it, he told Nelson.

Wlad ended on a pure promoter note, saying that the event is sold out. They ended with a hands shake and a mutual “good luck.”

My take: Wlad is arguably in the driver’s seat, with a small and subtle hold over AJ. Joshua looks to him for wisdom and for cues on how and when to proceed during conversations. Is this Klitschko being a master manipulator, or just his personality? Impossible for me to say. I didn’t sense that there’s any gamesmanship afoot which would and will influence the bout. The talk isn’t cheap, it’s been top tier, as the sellout will help attest to. But in the end, as per usual, it will be the action inside the ring, not the talk in the lead-up, which affect the ledger on April 29.

Readers, talk to me … Did you watch this program? What are your thoughts on the presentation? Did you pick up any tidbits or tells? And who do you like April 29, the ascendant possible mega-star Joshua, who could, truly, help usher in a dynamic identity to this post-Floyd Mayweather era, or the 41-year-old obsession freak, who seeks to prove that Father Time best wait awhile before pronouncing him past prime?