Dmitry Bivol looks like the real deal in stopping Clarkson

OXON HILL, Maryland — Even before the first punch was thrown Dmitry Bivol wore a snarky grin, as if to imply he was in firm control, as he approached the middle of the ring to listen to referee Harvey Docks’ pre-fight instructions and touch gloves with opponent Samuel Clarkson Friday night in the luxurious MGM National Harbor on Showtime’s ShoBox show.

About 20 seconds into the interim WBA light heavyweight title defense, Bivol showed why he had such confidence, landing a right to the body that grabbed Clarkson’s attention and had him backing up. A few seconds later, Bivol was looking down at Clarkson, after plowing him with a left hook to the jaw. Sensing blood, Bivol, under control and honing in, dropped Clarkson a second time with a perfect right to the chin. 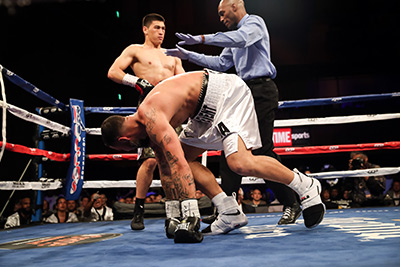 From there, it seemed a matter of time, and three rounds later, the time arrived when Bivol clipped Clarkson with a right, sending him down a third time. Dock stepped in and waved it over at 1:40 of the fourth round when Clarkson got up gingerly. He didn’t complain at all. He knew, and so did his corner.

Bivol (10-0, 8 knockouts) was impressive, dominant and proved his point that he should be in the discussion for a world title shot. He worked distance well, varied the level of his punches and showed great patience.

After the fight, there was immediate talk that Bivol deserved a chance at the WBA “regular” champion Nathan Cleverly.

Clarkson (19-4, 12 KOs) had not lost a fight in three years, until Friday night, and his nine-fight winning streak included victories over Izaak Cardona, Cedric Agnew, Jerry Odom and Lavarn Harvell—all fighters who had just one loss at the time they faced Clarkson.

As far as Clarkson, “To be honest, I don’t think about my opponents that much, I focus on what I have to do,” Bivol said. “I had a very good training camp and I was happy with my performance.”

On the co-feature, Malik Hawkins (11-0, 8 KOs) made pretty easy work of Carlos Soto (13-1-2, 7 KOs). Hawkins, a rangy 21-year-old welterweight, got touched a few times by Soto, the sub of a sub who was fighting for only the second time in the last three years. It showed. Soto’s right eye blew up the first time Hawkins landed anything substantial in the opening round and he was aware enough to take a knee in the last :10 of the first when he couldn’t see the punches coming.

After the second round, Soto knew quickly it was hopeless and didn’t come out for the third.

Hawkins, who has five first-round knockouts on his ledger, however, against far inferior competition, landed 63 of 164 (38%) total punches to Soto’s 34-129 (26%) in the scheduled eight-rounder. While undefeated entering the fight, Soto had never fought in the United States before and it was first time he fought someone with double-digit victories.

On the first televised fight, Glenn Dezurn Jr. (9-0, 6 KOs) remained undefeated by winning an eight-round super bantamweight fight over Leroy Davila (5-1, 3 KOs). All three judges, Lynne Carter, John Gradowski and Don Risher, had it for 78-74. RingTV.com had it a little closer, still giving it to Dezurn Jr., but by 77-75.

In the non-televised undercard fights, Hasim Rahman Jr., from nearby Baltimore, made an emphatic point in his pro debut by dismantling Ralph Alexander, who was also making his pro debut, in just 40 seconds. Rahman Jr. had his dad, former heavyweight world champion Hasim Sr., work his corner.

In the first fight of the night, Sergey Kuzmin (10-0, 7 KOs) scored a third-round TKO over Keenan Hickman (5-2-1, 2 KOs) in a scheduled eight-round heavyweight bout. Hickman could not continue after hurting his left arm in the third round.

If there is someone that bears watching it’s Ruben Villa, a 19-year-old prospect from Salinas, California, who owns two amateur victories over 2016 Olympic silver medalist Shakur Stevenson. Villa, who lost to Stevenson in the 2016 Olympic Trials, is more advanced as a pro than Stevenson, who is yet to make his pro debut.

In what was the comic-relief fight of the undercard, Joey “The Tank” Dawejko, from Philadelphia, fought Rodney Hernandez to an eight-round heavyweight split-draw. The fight was terribly entertaining. Hernandez (10-5-2, 2 KOs) left with a bloody nose and his white trunks had a reddish hue from blotches of blood. Dawejko (17-4-4, 10 KOs) does not exactly possess the body beautiful, but he is awfully fun to watch. Neither Dawejko nor Hernandez could get out of each other’s way. It was like a clash of crash dummies.