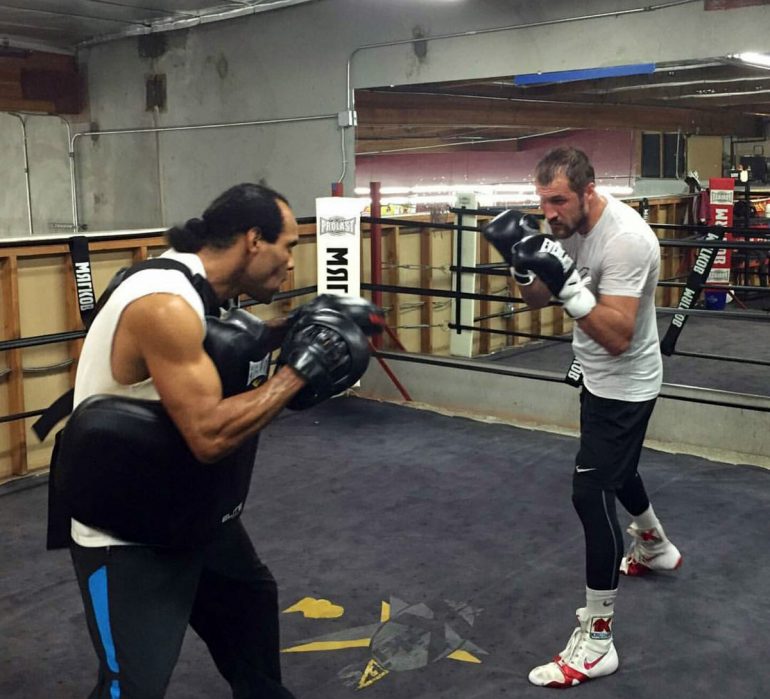 Jackson (pictured left with Sergey Kovalev) has gone on to become a world-class trainer. Photo courtesy of Main Events
12
Apr
by Michael Woods

On June 17, Andre Ward and Sergey Kovalev will renew their acquaintance in violent fashion. This week, they’ve been in pre-heat mode, as press conferences in New York, Oakland and Los Angeles have featured ample dosages of revved up (but still contained) tempers which have some thinking, perhaps wishfully, that the rematch of the November tango could prove to be a nastier and better bout.

Team Ward has been saying that their guy could be stopping the Russian this time — manager J Prince especially seems to see this disposition in his crystal ball — while Kovalev says he’s focused on removing the judges from the equation in the sequel set in Vegas, to run on HBO PPV.

On Monday, during the NYC leg of the press tour, the California-based Russian told media that he overtrained last time and wouldn’t this time and thus he’d have more strength and stamina with which to dispatch the Roc Nation boxer. Some have been wondering, especially after on Tuesday Ward trainer Virgil Hunter took to the mic and speculated aloud if Kovalev would again be seconded by trainer John David Jackson. Maybe not, Hunter put out there, because a scapegoat needs to be sacrificed.

So, I reached out to Jackson, a Florida resident. You still training Kovalev, John David?

OK, so nothing to the Hunter talk, then?

“He/they can do that because if Sergey does what he is supposed to this time,” Jackson said, “he not only wins one sided but he stops Ward!”

No, he didn’t care to delve into how he will look to insure Kovalev finishes the job he threatened to in round two of the first clash. And no, he didn’t portray the Kovie by stoppage vision as being a foregone conclusion.

“Ward and Hunter have a great chemistry together,” Jackson said in closing, “so Sergey has to bring his A-plus game this time.”