From THE RING Magazine: The building of Joe Smith Jr. 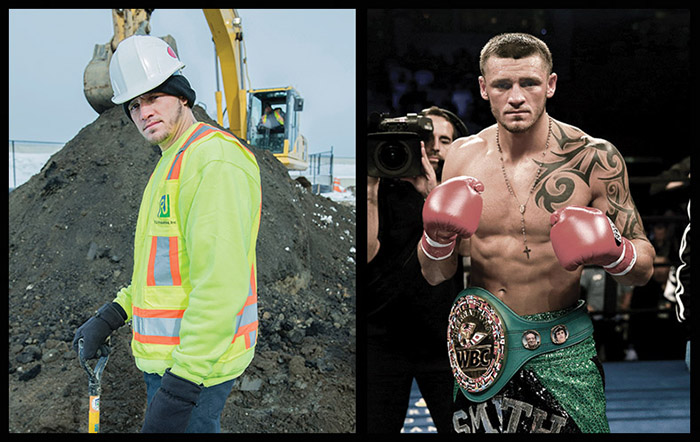 (Note: This story originally appeared in the May 2017 issue of THE RING Magazine.)

The eyes are at half mast. They usually are in the morning gloom as Joe Smith Jr., hard hat tucked under his arm, muddy work boots scraping against the cement walkway, trudges toward his Jeep.

Most days on Long Island, New York, begin like this for one of today’s best-known light heavyweights. He’s either heading to powerwash a septic tank with fumes so nauseating he can hardly breathe, pour concrete, lay cement blocks, dig trenches in freezing temperatures, lug sheetrock or do a demolition job that entails ripping up floors and tearing down walls nonstop for eight or 10 hours.

It’s draining. It taxes not just the body but the mind. It’s true hands-in-the-dirt grunt labor. It’s who Smith is, and it’s something that makes him unusual among elite boxers.

Whereas other pro fighters of Smith’s caliber view themselves as “full-time” boxers, Smith tells himself most days to “keep it moving” as a full-time construction worker before he heads home and transforms into a fighter.

“There isn’t a day that goes by when I’m not asking myself, ‘What the hell am I doing here?’ since I have boxing,” Smith said. “But I do see how my day job, so to speak, works well with my night job as a fighter. I don’t really think I would be able to do one without the other. You have to be mentally strong to do both. My days will begin around 5:30, 6 in the morning and I’m dog-tired. But if I don’t work hard now, in and out of the ring, I won’t get the good things in life that I want.

“It’s why I get right to the gym around 5 every afternoon after working eight hours of construction. Tell me another fighter in the world that does that. I’ve gotten used to it all through the years. Hell, I’m human. Every day I go to work I want to leave. I just push myself to stay as long as I can. I keep myself motivated to go past that pain. It’s where that mental attitude carries on into the ring. No one can beat down a hardhat guy who can take anything. I think I’m in that category. All I needed was an opportunity. It’s all I was looking for. And look what happened when I got it.”

The boxing world received a face-first introduction to the pride of New York Laborers Local 66 union last June, when the 27-year-old Smith, a 25-to-1 underdog, shocked everyone by stopping heralded light heavyweight contender Andrzej Fonfara on national TV from Chicago’s UIC Pavilion. It was considered a tune-up fight for Fonfara. For Smith (23-1, 19 knockouts), it was a life-changing opportunity. 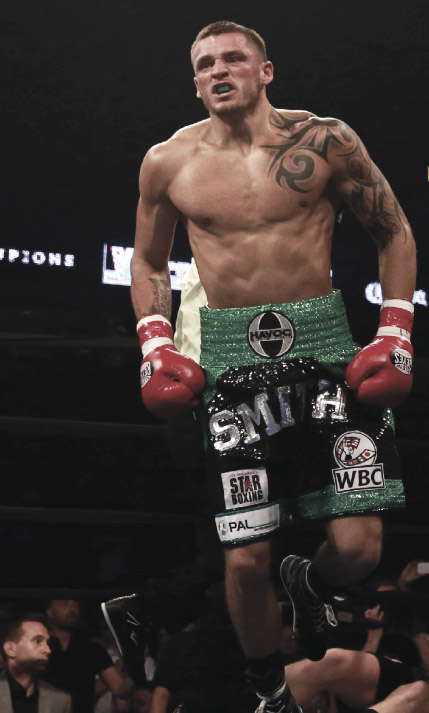 A looping counter right that Fonfara didn’t see dropped him. A pulverizing left hook finished him at 2:32 of the first round. Suddenly, the hard-nosed construction worker was trending.

“Yep, everyone found out about me then,” Smith said with a laugh, “and no one outside of my corner and probably the guys I work with thought I could win. That to me changed everything. For a second, I thought about leaving construction, but that’s not me and who I am. Boxing is such a crazy game that you could go months and months without a fight. How will I pay my bills? How will I get the things that I want and do things for my family? I wasn’t about to change everything, because working construction and doing all of the things I did got me here. Why change something that isn’t broken?”

Actually, hardly any of this crazy tale would be possible without the Capobianco brothers, Jerry and Phil. To understand Joe, you have to first understand them. Jerry, Joe’s trainer, and Phil, his manager, grew up in what can be called a “boxing family.” They’re the two youngest of four boys, Johnny and Kevin being their older siblings, and all of them were fighters. They would rattle the house pounding away on an old heavy bag that used to hang from a wooden beam in their basement and even got other neighborhood kids involved. Boxing is part of their DNA.

The love of the sport came from their father, John Sr. He ran the Huntington Athletic Club on Long Island, where he came across a young Gerry Cooney and got the future heavyweight title challenger started. Cooney and the Capobianco boys all went to Walt Whitman High School.

“My brother Jerry is the one who really found Joe,” Phil said. “Joe is a story and a half. He was always a good kid, but Jerry made a difference in Joe, and I know my father would be very proud of the work Jerry has done with him. My father, unfortunately, passed away in 2011.

“I’ll be honest, I wasn’t a believer at first. Jerry stuck with Joe and saw things that Joe didn’t see in himself. Before the Fonfara fight, I told Joe, ‘You’re going to find yourself one of the hardest-hitting light heavies in the world, or you’re going to kick yourself for blowing the chance of a lifetime.’ The world found out about Joe Smith that night.” 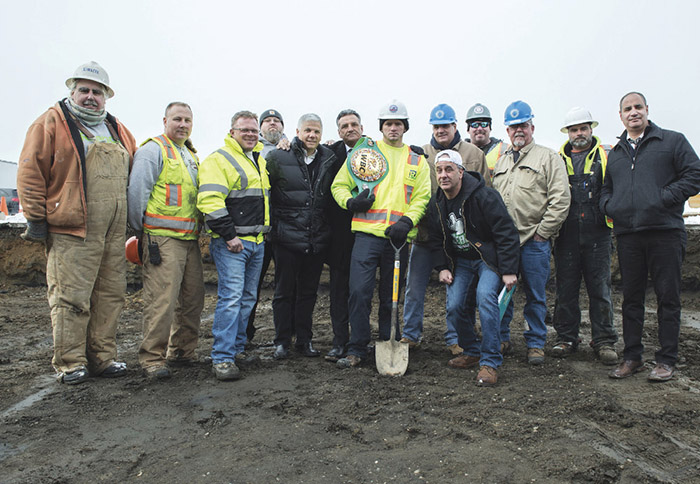 It’s the same work ethic John Sr. instilled in his boys. “Joe is definitely a product of my father,” said Phil. “My father was everybody’s father. And Joe did train hard for that Fonfara fight, but he trained hard because Jerry was constantly on him.”

It wasn’t easy. At first, there was a lot of prying. Jerry came across Smith at Heavy Hitters Gym on Long Island, when Smith was around 18. To define Smith as an undisciplined ruffian would be pretty accurate. He came and went as he pleased. He’d bang the heavy bag with a seeming nonchalance toward getting better.

It twisted Jerry up. He saw Smith fight in the New York City Golden Gloves and watched him lose, thinking to himself, “If someone taught this kid a little something, he could be special.”

Smith actually reminded Jerry a lot of himself and his brothers.

“Joe had a toughness that was sort of rare, but it was hard to control, because Joe was a pain in the ass in the beginning,” Jerry said. “It started slowly. I went over to him and taught him how to throw his right hand better. Little things like that.”

The day after, Smith was at the gym at 6.

“Joe lacked discipline, and that changed over time,” Jerry said. “Once Joe began growing up a little, my brother and I got him a job. We didn’t even know if Joe would show up or not. That’s where I think the construction job began kicking in. He has discipline today. That wasn’t just the boxing that did it. Joe knew he had a job to go to every morning – and he knew he had to be there on time.”

Gradually, as Smith rose through the club circuit, he made converts. First was Phil, after Smith went more than six rounds for the first time and stopped Dion Savage in the ninth, in September 2015. Later that year it was Smith himself, when he went 10 in a unanimous decision over local pro Will Rosinsky on the Danny Jacobs-Peter Quillin undercard at Brooklyn’s Barclays Center.

Smith idolized Rosinsky for his distinguished amateur achievements. That was Smith’s first standard. Once he topped that, his confidence soared.

“In Joe’s mind, Will was something special,” Jerry said. “That was the fight that I think told our team, when Joe is right and trains hard, he could beat anyone at 175 pounds. It was a big stage. I always thought Joe would be great, but we saw then against Rosinsky what Joe could really do. There’s an inner strength about Joe that’s special and rare. I’ve been around the fight game my whole life and Joe has a toughness you can’t teach. It’s something that you have or don’t have – and Joe has it.”

His 2016 started with the Fonfara victory, and it was topped off by being handpicked for the career finale of future Hall of Famer Bernard Hopkins. It would take place in mid-December at the Forum in Inglewood, California. Again, not many gave Smith much of a chance. Hopkins went back to his “Executioner” motif and Smith became an afterthought, presumably just another notch and a trivia answer to B-Hop’s last fight.

No one figured the “hard-hat guy” would surface. Hopkins won one round on most scorecards – the fourth. Otherwise, the HBO televised fight served as a great showcase for Smith, who trended once again after sending the still formidable Hopkins through the ropes 53 seconds into the ninth round. B-Hop tried to convince those at ringside and fans watching at home that Smith pushed him. The fight tape proved Hopkins’ assertions to be incorrect. 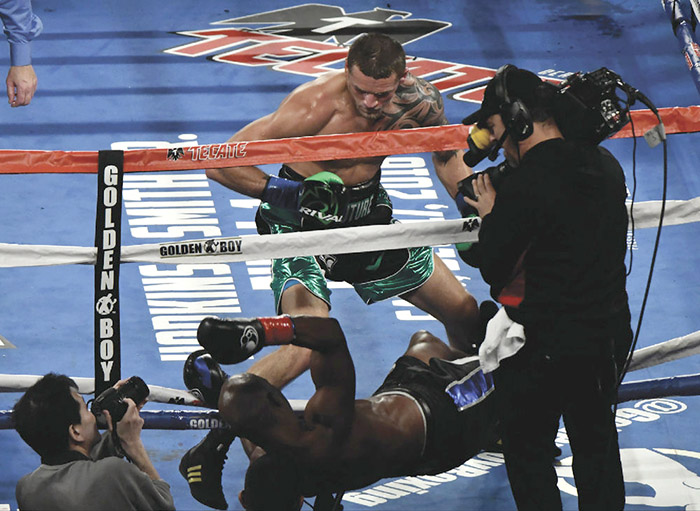 Bernard Hopkins’ career came to a dramatic end at the heavy hands of Smith.

Two weeks later, Smith was back on a construction site absorbing the accolades of his coworkers.

“Aside from Joe’s boxing ability and his punch, I thought outside the ring Joe had that down-to-earth, determined character, and it’s why I took an interest in him,” said Joe DeGuardia, president and CEO of Star Boxing, which promotes Smith. “With Joe, you have to do a lot of dusting and polishing to find the final product, and Joe’s still not there. I believe Joe can be even better.

“When you build a house, before you build it, there’s a lot of dirt at the base. Building Joe has been a process, but the Capobiancos have put a lot of work into him. I think it’s important that Joe is still working his regular job. I think back when I was boxing and I was in law school, and people would ask how I could do both. Well, they complemented each other. Boxing and law school forced me to be focused at a young age. I think the same thing applies here with Joe. He has the personality that needs that kind of regimen.”

The goal in 2017 is to get WBC titleholder and former RING champion Adonis Stevenson in the ring before the year is up. Team Smith feels they have a compelling argument: What Smith did to Fonfara was something Stevenson couldn’t do, which was to stop him.

“Joe doesn’t have it easy, but Joe doesn’t really have it that hard, either,” Jerry said. “The first time I went to Phil, I told him that I think Joe can really be something. We made a promise to Joe and his father that he’s going to be better off after his boxing career is over than when he’s fighting … and with boxing, you never know.

“Joe will have a job and a pension and something to always fall back on. It’s reassuring. When it comes time to fight, Joe will take the time off like he usually does and he’ll be ready. We found Joe like he found us.

“Joe’s keeping me young, that’s for sure. But this is an exciting time and the future seems to be his. I always told Joe, if he listens and dedicates himself, he’s going to be a world champion one day. He’s pretty close right now.”