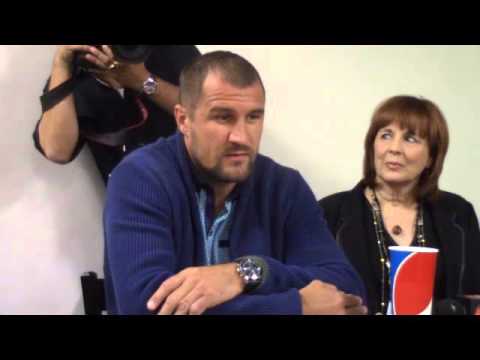 The contracts may be signed and the rematch has been announced. But on Monday, Sergey Kovalev expressed doubts the bout with light heavyweight champion Andre Ward on June 17 will still happen, twice voicing suspicion that Ward will pull out with an injury.

“I am surprised that the rematch will happen,” Kovalev said on Monday, speaking through a translator before the kick-off press conference in Manhattan for a bout for the RING light heavyweight belt, as well as Ward’s WBA/IBF/WBO titles at Mandalay Bay on HBO PPV. “But I will be happy when it actually happens,” he went on. “A week or two before the fight, he might say he had an injury and not fight.” Again on stage at the press conference, Kovalev asserted his theory, saying he hopes Ward doesn’t pull out with an injury.

During Ward’s turn with the media on Monday, he expressed disbelief at the suggestion he might pull out. “I don’t know what you want me to say,” he said. Soon after Ward (31-0, 15 knockouts) won a razor-thin decision by three scores of 114-113 on Nov. 19 to wrest away Kovalev’s belts, Ward said he may retire rather than face Kovalev again if the deal wasn’t to his liking. Kovalev (30-1-1, 26 KOs) likely based his fear that Ward really doesn’t want to fight him again on that possibility, as well as the extended way Kovalev and his promoter, Kathy Duva view Ward’s approach to finalizing the rematch. Duva exercised a rematch clause immediately after the first fight. Still, it took Ward some time before he actually signed a contract to fight again, Duva said, leading to speculation by Kovalev that perhaps Ward never wanted the bout.

“He’s scared,” Kovalev said. “They didn’t respond to our emails, to our calls until the end of February, that tells me something.” Duva followed up on that point. “The negotiations did not drag on at all,” she said. “They lasted about a week. We waited once for them to talk to us. Then we made a deal and then we waited weeks for Andre to sign. So, we weren’t doing all that much negotiating, which makes me wonder, too, what took so damn long.”