Cermeno surrenders after 10 rounds against Kubo in Japan 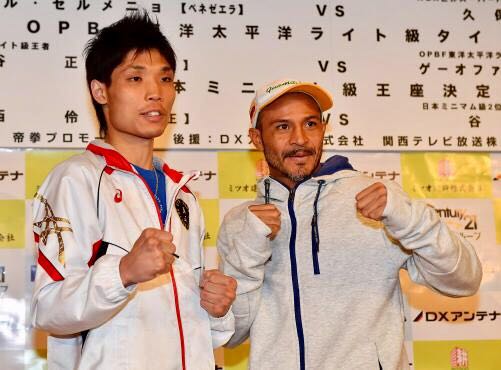 Time ran out on the late career resurgence of Nehomar Cermeno as the Panamanian remained on his stool after the 10th round, giving Shun Kubo the biggest win of his career on Sunday at the EDION Arena in Osaka, Japan.

Kubo (12-0, 9 knockouts) is now just the second fighter to stop Cermeno (26-6-1, 15 KOs), after Fernando Montiel did the job in 2011. Two of the judges had Cermeno ahead by a point at 95-94 heading into the championship rounds while a third had it by the same score for Kubo.

The win earns Kubo the WBA “regular” junior featherweight title, which is not recognized by THE RING as a legitimate world title. Guillermo Rigondeaux holds the recognized “WBA Super World” title at 122 pounds.

The Venezuelan Cermeno, who is 10 years the senior of Kubo at 37, started the fight the stronger of the two, landing an effective combination on Kubo along the ropes in the second round, punctuated by a right hand around the Japanese fighter’s wandering left glove.

Kubo stabilized in the third round, using his footwork and jab to keep Cermeno at a distance while dialing in straight lefts to the head and body.

That pattern persisted through the middle rounds as Kubo’s speed allowed him to get off first and be out of range for Cermeno’s counterpunches.

Hope returned to Cermeno in the seventh round when one of his wide-swinging right hands knocked back the head of Kubo, forcing him to attempt a clinch. Unable to grab, Kubo was downed by a quick left hook, right cross combination. Kubo rose at the count of eight and looked ready to be finished as Cermeno swung away before the bell allowed Kubo to escape the round. Kubo was able to clear his head between rounds and resumed his boxing and moving.

Cermeno seemed in the fight in the tenth round and had not been visibly wobbled, making it even more surprising that he would not answer the bell for the eleventh round.

Reiya Konishi (13-0, 5 KOs) won the vacant Japanese strawweight title with a majority decision over previously unbeaten Masataka Taniguchi (6-1, 4 KOs) by the scores of 96-94 on two cards while the third had it 95-95.

The card was promoted by Masato Yamashita’s Shinsei Promotions

Across town at the Sumiyoshi Ward Center, Japan-based Filipino Mark John Yap (26-12, 12 KOs) scored five knockdowns against a fighter from Thailand purported to be named Sitthichai Turedphon (ring name Ninmongkol Phetphumgym) before the fight was stopped after the second round, Yap tells RingTV.

Boxrec.com did not list the opponent for Yap’s eight-round fight, in which his OPBF bantamweight title was not at stake, and no fighter under either name for the Thai is listed on the website.

A bout sheet shown to this writer lists the fighter as being 19 years old with a record of 8-3 (2 KOs). A message was sent to a Japanese Boxing Commission official seeking verification of the Thai fighter’s identity. An email was also sent to Thailand Boxing Commission Secretary General Chalerm Prayadsab, but has yet to be answered.

Yap had previously told this writer that he would face former Japanese bantamweight champ Kentaro Masuda (26-7, 14 KOs) in July.

The show at Sumiyoshi was promoted by Takashi Edagawa’s Muto Promotions.