Last week it was announced that Andre Ward would defend his light heavyweight titles against Sergey Kovalev in a hotly anticipated rematch on June 17, which also is for THE RING championship. Along with being the two top fighters in their division, Ward and Kovalev are ranked Nos. 1 and 2, respectively, in THE RING pound-for-pound rankings.

The last time that happened was 20 years ago.

On April 12, 1997, Oscar De La Hoya won the WBC welterweight title when he defeated Pernell Whitaker by a 12-round unanimous decision at the Thomas and Mack Center in Las Vegas. The scores were 115-111, 116-110 and 116-110 in the new champion’s favor, but for the first time, although certainly not the last, major controversy hung over a De La Hoya fight.

Out of 26 writers polled by the Las Vegas Review-Journal, 14 had Whitaker ahead, 11 had De La Hoya, with one scoring the bout even. The margin of victory inflamed the situation and a large portion of boxing’s most established and recognized media members voiced their criticism in earnest.

Whitaker, from Norfolk, Virginia, was 33 years old at the time and a boxing legend. Olympic gold at Los Angeles 1984 and six world titles across the lightweight, junior welterweight, welterweight and junior middleweight divisions had established “Sweet Pea” as a lock for the Hall of Fame. Pound-for-pound supremacy was ironically bestowed on him following a majority draw with Julio Cesar Chavez in September 1993. Whitaker had outclassed the Mexican icon with room to spare, but two judges missed the fight completely and managed to score it even.

Factor in that Whitaker’s lone defeat, a 12-round split decision loss to Jose Luis Ramirez in 1988, was also spurious and De La Hoya was essentially facing a four-weight world champion who was unbeaten in 42 fights.

De La Hoya captured Olympic gold in the 1992 Barcelona Olympics. The East Los Angeles product turned professional later that year and his popularity soared with each passing victory. He was charming and media-friendly, switched from English to Spanish effortlessly and, what’s more, he could fight like hell. The most charismatic crossover star since Sugar Ray Leonard had won 20 of 23 fights by knockout and picked up world titles at junior lightweight, lightweight and junior welterweight. Now he had grown into a fully-fledged 147-pounder and made the audacious choice of facing Whitaker for his welterweight debut. 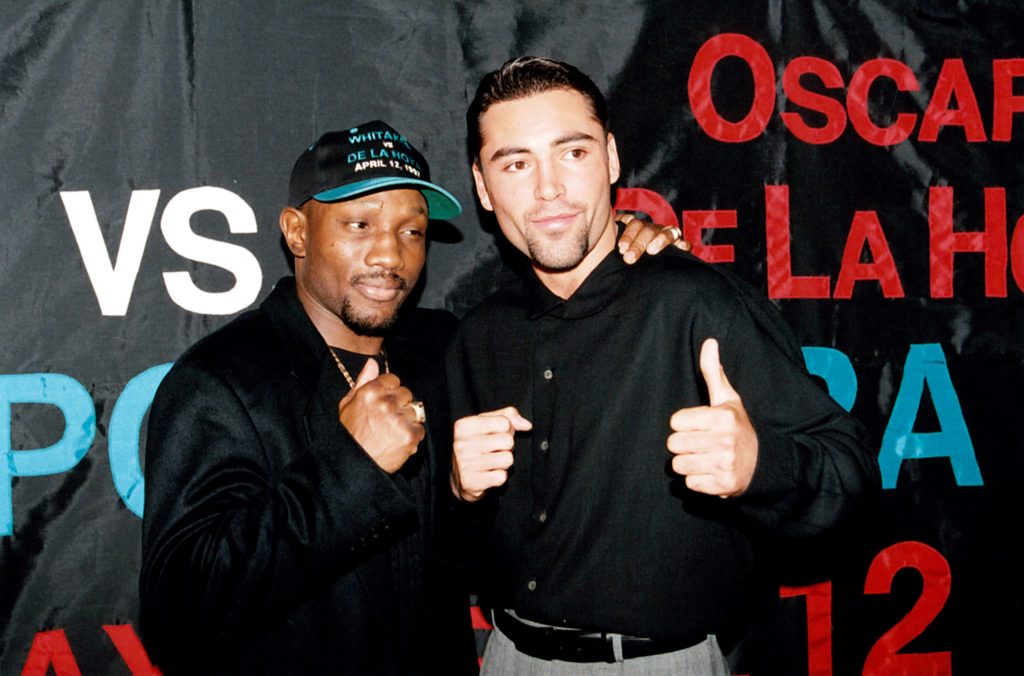 While De La Hoya hadn’t mixed with the same level of competition as Whitaker at that point of his career, his resume was still impressive. At 24 years of age, he had beaten Genaro Hernandez, John John Molina, Rafael Ruelas and Jesse James Leija at lightweight. All four of those fighters had held, or were holding, world titles and only Molina provided any kind of resistance. De La Hoya had then moved up to junior welterweight and butchered Chavez, his boxing idol, inside four rounds.

“Whitaker, in my eyes, beat Chavez without a doubt,” De La Hoya said in an HBO preview show. “I want to win this fight because I’m getting revenge for Chavez. If I beat Whitaker, then I’m beating the very best and it is like passing the torch. Whitaker had his day and now it’s time for another fighter.”

De La Hoya’s confidence was likely bolstered by the fact that his opponent appeared to have lost a step. Whitaker required two 12-round decision victories to establish dominance over Puerto Rican contender Wilfredo Rivera in 1996, and he had looked woeful against the unheralded Diosbelys Hurtado in his most recent outing. Whitaker was decked twice by the Cuban defector before producing a come-from-behind knockout in the 11th to rescue the De La Hoya payday.

But what Team De La Hoya hadn’t counted on was the champion’s mindset for this fight. Whitaker was as motivated as he had been for Chavez and trained like a man possessed. An upset victory over boxing’s latest superstar, who was both younger and more powerful, would be the perfect mic drop. Whitaker, co-trained by Ronnie Shields and Lou Duva, was in the zone.

De La Hoya was being trained by Jesus Rivero, to whom he referred respectfully as “The Professor”. Rivero, who had taken Miguel Canto to a WBC flyweight title in the 1970s, had improved De La Hoya’s defensive skills and was supremely confident. “(Oscar) will have the power but the change will consist of being faster,” the veteran trainer told HBO. “To win over Whitaker, the most important thing to have is the speed, not the power. The only way to win over a fast opponent is speed. Whitaker has won over his opponents with his speed. I think that Oscar is going to be faster than Whitaker.”

Roy Jones Jr., who had suffered his first loss (a disqualification against Montell Griffin) three weeks before Whitaker-De La Hoya, provided pre-fight analysis for HBO and hinted that De La Hoya was in for a stern test. “Whitaker doesn’t go in there to knock you out with one punch,” Jones said. “He goes in to accumulate blows, wear you down and then knock you out. De La Hoya does go in the ring to knock you out with one punch, but he’s fighting the most elusive fighter of the last 10 years.”

He was also fighting a southpaw and De La Hoya, a natural left-hander who had been converted to the orthodox stance, hadn’t mixed with one of them since he stopped Jimmi Bredahl for his first world title three years earlier.

The crowd was in uproar during ring entrances. Whitaker, as champion, confidently followed a stoic De La Hoya and whizzed around the perimeter of the ring as though to test his dancing shoes prior to the introductions. De La Hoya exuded laser beam focus and was poised for combat. 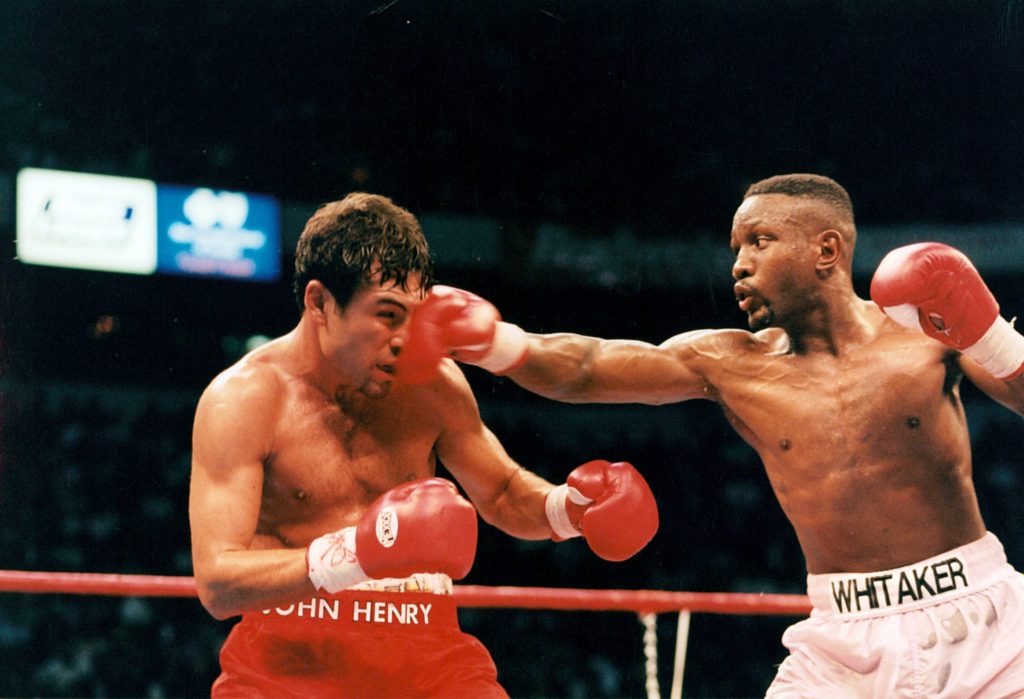 The Whitaker jab was on point.

From the opening bell, Whitaker looked as sharp as he had in years. Every feint, every superb piece of footwork, every rough-house tactic on the inside was designed to make the younger man uncomfortable. Having competed as a junior middleweight, Whitaker was unofficially heavier than De La Hoya (157 to 151 pounds) on fight night and easily held his own up close. His right jab was a serious weapon, as was the straight left hand to the body.

Following a good second round, De La Hoya was cut over his right eye in the third by what was ruled as an accidental clash of heads by referee Mills Lane. As a result of a somewhat absurd WBC rule, in place at that time, a point was deducted from Whitaker’s score even though the damage he had caused was unintentional.

Early on, it was clear that De La Hoya’s jab and blazing left hook would be difficult to land cleanly. Occasionally the shots glanced off the target but mostly Whitaker deflected them off his right shoulder or avoided them completely. At one point, De La Hoya did manage to land a big left hook and both fighters shared a laugh over it at ring center. That’s how rare an occurrence it was.

Tactically stymied, De La Hoya needed something new and he delivered. Rapid right hands landed flush and he attacked the body. The most interesting strategic maneuver in the fight, however, was his decision to periodically turn southpaw. It would be the only time in De La Hoya’s 16-year professional career that he would do this. The right jab worked in spots and and an eye catching left uppercut was an integral part of a varied and dynamic offense.

Despite De La Hoya’s tender years, he was a student of the game. In the closing seconds of rounds, his multi-punch flurries would send the capacity crowd into a frenzy but, more importantly, they were attractive to the judges. When watching the action live, these attacks looked spectacular but slow motion replay confirms that Whitaker was slipping shots with an almost psychic anticipation. At times, De La Hoya looked like he was trying to catch a piece of paper in a wind tunnel.

In Round 9, Whitaker was given credit for a left-hand knockdown. Even though he had actually tripped over his opponent’s foot, the situation was now critical for “The Golden Boy” in terms of scoring. De La Hoya dutifully responded and, upon reviewing the fight recently, I gave him the 10th and 12th rounds to secure victory by a single point. A De La Hoya win was acceptable, but had Whitaker retained his title, it would have been difficult to criticize the result. It was close and could have gone either way.

“I thought I did enough to win the fight,” said De La Hoya after winning his fourth divisional title. “I said I would put the pressure (on) but Whitaker is very difficult and his southpaw style would intimidate anyone – believe me. Anybody would be frustrated against Whitaker. He’s an ‘undefeated fighter,’ a six-time world champion and this young kid beat him.”

Whitaker, who’s face registered shock when the decision was announced, could not contain his anger and disappointment. “Of course (I won) but that really doesn’t matter,” he said. “As long as the world saw it, then the people can say who won the fight. I should have gotten 10 out of 12 rounds. It was a shutout. For 12 rounds, he took punishment, he took a beating. He can have the title but we know who the best fighter is.”

There is no way that Whitaker won 10 of 12 rounds, but he might be excused because of his disappointment in the immediate aftermath.

Before De La Hoya was fully aware of just how controversial the scoring was, he felt compelled to promote the sequel. “We’re gonna give him the rematch – anytime, anywhere,” announced the new champion. “I’m frustrated because I could have did much better. I’ll feel unfulfilled until I can dominate his style.”

“I was never hurt in the fight,” proclaimed Whitaker before expressing doubt that he would get a second chance. “I don’t even know if he would fight me again. I couldn’t perform any better than that. We came out here and expressed the Pernell Whitaker of old. The movement, the pizzazz, the ring generalship. I had a great time tonight.” 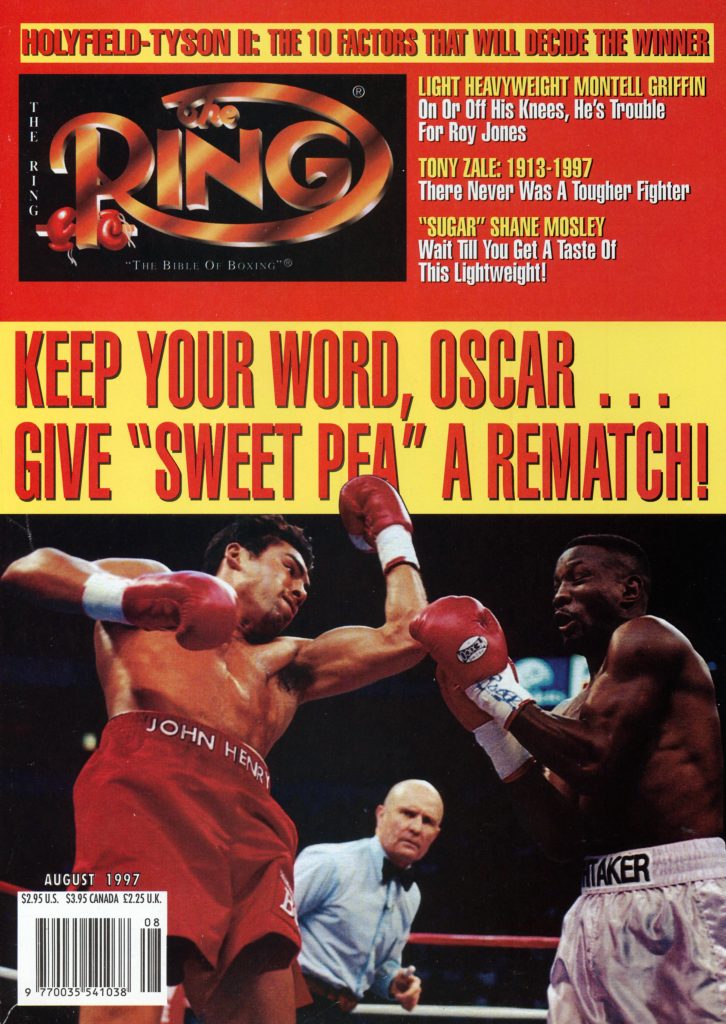 Obstacles to a proposed rematch were many and varied. De La Hoya was a busy champion and Top Rank Promotions had his schedule marked out for the remainder of 1997. He knocked out David Kamau in two, decisioned former champion Hector Camacho and cut up Wilfredo Rivera in eight. Was Bob Arum kicking the door down for a “Sweet Pea” re-run? One would doubt it.

During this time, Whitaker lost his way. A decision victory over Russian contender Andrey Pestryaev in October of that year was changed to a no-contest when he tested positive for cocaine. Subsequently, a title shot against then-WBA titleholder Ike Quartey was scrapped, and Whitaker would later be arrested and convicted for a DUI offense. He fought twice more, losing on points to then-IBF titleholder Felix Trinidad before a shoulder injury against Carlos Bojorquez led to the only stoppage defeat of his career in April 2001. His final career record was 40-4-1, with 17 knockouts.

De La Hoya would go on to engage in a plethora of lucrative superfights and claimed divisional titles all the way up to middleweight. Battles against Ike Quartey, Felix Trinidad, Shane Mosley, Fernando Vargas, Bernard Hopkins, Floyd Mayweather and Manny Pacquiao were pay-per-view bonanzas. Following defeat to Pacquiao in December 2008, De La Hoya retired with a career record of 39-6, with 30 KOs.