HBO has interest in Danny Jacobs, wants him back after GGG fight 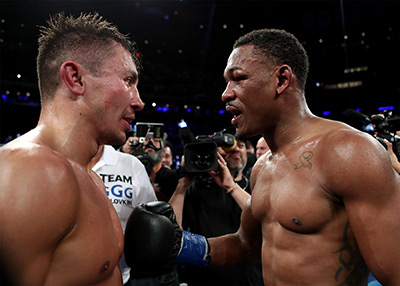 Coming off his strong performance against Gennady Golovkin on March 18, Danny Jacobs caught the eye of officials from HBO, which broadcast the bout and has interest in bringing Jacobs back to its airwaves, RingTV.com has learned.

Jacobs is managed by Al Haymon and Keith Connolly and is loyal to Haymon and his Premier Boxing Champions brand, so it’s unclear how such an arrangement would be made since Haymon does most of his business with Showtime and its boxing head Stephen Espinoza. But Jacobs made a strong impression on HBO officials, not only with his performance against Golovkin but also with the way he carried himself outside the ring, according to a source, who stressed that there was only interest on HBO’s part and not any sort of formal discussions taking place. Jacobs is a cancer survivor and father of an eight-year-old son, Nathaniel, who is nearly always by his side as he trains and conducts interviews for fights.

Reached on Thursday and told of HBO’s interest in Jacobs, Connolly said he was grateful that Jacobs impressed the network. “Danny made a lot of fans that day with his fight against Gennady Golovkin so it’s nice to see that HBO liked what they saw,” he commented. “However, we work with Al Haymon and anything we do would have to be agreed upon with him involved. So, it remains to be seen if HBO’s interest will turn into anything more than just flattery. Still, it’s nice to hear they appreciated Danny’s performance.” Jacobs lost a spirited unanimous decision to Golovkin in the main event of an HBO PPV broadcast on March 18 at Madison Square Garden by scores of 114-113, 115-112, 115-12 for Golovkin’s WBC/IBF/WBA middleweight titles.