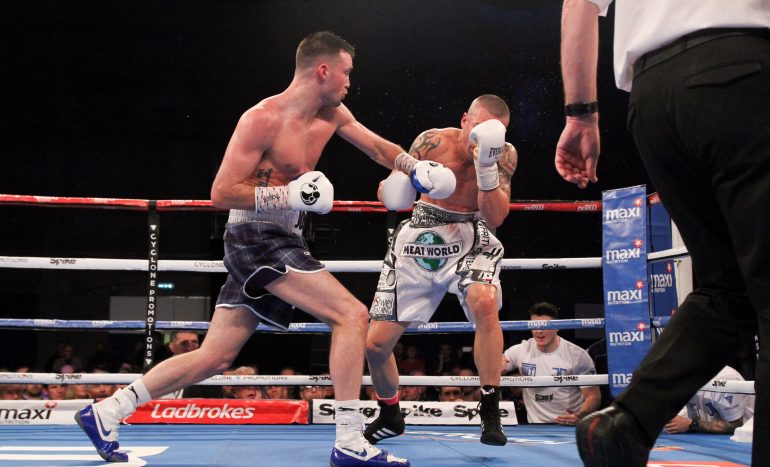 EDINBURGH, Scotland – Scottish junior welterweight Josh Taylor made a successful first defense of his Commonwealth championship with a sixth-round stoppage of Warren Joubert at the Meadowbank Sports Center.

The official time was 1:27 and the bout was scheduled for 12 rounds.

Taylor, who represented Team GB at the London Olympics in 2012, decked the challenger with a powerful left hand out of the southpaw stance in Round 6. The velocity of the shot, combined with the punishment he had already taken, left Joubert in no position to continue and referee Victor Loughlin stopped contest.

“He was a lot tougher than I expected,” said the unbeaten Taylor at the post-fight press conference. “I hit him with some shots and he got in a couple of punches of his own. That’s the first time I’ve suffered a cut (over left eye from a clash of heads).

“I was very happy with the performance and the finishing shot was a peach.”

Taylor took ring center at the opening bell and fired off commanding bursts, which were set up by a probing right jab. The visitor backed off tentatively although he did manage to counter with the odd single shot, which reddened Taylor’s face.

His success was short-lived. Joubert was shaken by power shots twice in Round 2 and some sharp combinations to the body had the South African clinching to buy time. When the bell rang to end the session, Joubert looked like he wanted to be somewhere else.

There was switch-hitting from Taylor throughout which further befuddled the 35-year-old visitor who was frankly out of his depth. The punishment intensified through the fifth and sharp blows to the body were beginning to take their toll.

The finishing blow was well-timed and decisive.

Taylor (9-0, 8 knockout) won the vacant Commonwealth title in October when he floored the vastly more experienced Dave Ryan twice on route to a fifth-round stoppage.

Due to the Scotsman’s invaluable amateur experience and stint on the World Series of Boxing (WSB) circuit, he is being moved fast by manager and former featherweight champion Barry McGuigan. Everything going to plan, more titles are in the offing.

“I’m always waxing lyrical but (Josh) is very impressive,” said McGuigan confidently. “We’ve already did some sparring with Anthony Yigit (European champion) and with all due respect, Josh dominated the session.”