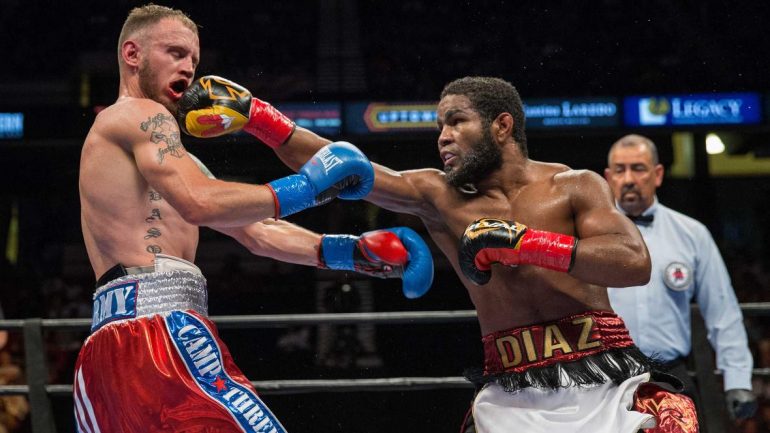 Junior welterweight unified titleholder Terence Crawford and 2008 Olympic gold medalist Felix Diaz Jr. have a deal in place to meet on May 20 at the Prudential Center in Newark, New Jersey on HBO, Lou DiBella, who handles Diaz, told RingTV.com on Wednesday.

“I’m thrilled because Felix got what he wanted,” DiBella told RING. “I spent a year trying to get it done and I got it done.” DiBella is waiting on the paperwork to make it official. Top Rank VP Carl Moretti didn’t immediately return a message for comment. Crawford and Top Rank had been juggling possible opponents with Antonio Orozco, Amir Imam and Adrian Granados also in the mix. Arum told RING last week that Imam was no longer in play after it became too difficult to reach promoter Don King.

There were also rumblings that HBO wasn’t too happy with Imam as an opponent after Imam was knocked out by Adrian Granados in November of 2015. Granados just lost a punishing split decision to Adrien Broner on February 18 and there were doubts he would be ready by May 20. And Orozco is set to face Keandre Gibson on April 1 at the Cosmo in Las Vegas and wasn’t available.

Crawford (30-0, 21 knockouts) received some criticism for taking on an overmatched John Molina Jr. and dominating him in December. A victim of his own talent, Crawford was in a position of having to face a sterner test in May or take more flak for his choice of opponents. Diaz (19-1, 9 KOs) seems to fit the bill. A 2008 Olympic gold medalist for the Dominican Republic, Diaz lost a controversial decision to current welterweight titleholder Lamont Peterson in 2015 and beat previously undefeated Sammy Vasquez in July to cement his status as a top junior welterweight.