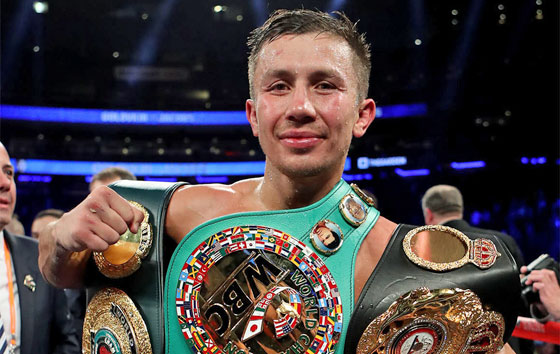 Gennady Golovkin: I asked a colleague when it became clear mid-fight that Golovkin had his hands full with Daniel Jacobs on Saturday night whether it was because we overestimated Triple-G or underestimated Jacobs.

The answer? A little of both.

Jacobs is an excellent boxer and a big middleweight, as he technically rehydrated into a cruiserweight. No one should be surprised that he did well. At the same time, one would’ve expected the Triple-G who had attained god status to seize control of the fight at some point but it never happened.

A measured Golovkin groped for an advantage until the final bell, as did Jacbos. No one could be certain who had won until we heard the official scores, which was almost surrealistic given Golovkin’s domination over the years and 23 consecutive knockouts.

I thought each man fought carefully out of respect for the other – perhaps too carefully to accomplish something special – but I gave Golovkin the nod 114-113, six rounds each. That means, on my scorecard, Jacobs lost the fight because he was knocked down in the fourth round.

Now let me be clear about something: This really isn’t a knock on Golovkin (37-0, 33 knockouts) even though he seemed more human than ever. Jacobs represented by far the toughest test in his career and he passed it, which is the name of the game. Every fighter – even great ones – have nights like this.

And the struggle (if that’s what it was) could serve Golovkin going forward. The fight he and everyone else want is Canelo Alvarez, assuming Canelo gets past Julio Cesar Chavez Jr. on May 6 and Golovkin schedules and wins an interim fight.

Canelo and his handlers, who already have said repeatedly they are targeting a showdown with Triple-G in September, have to be more motivated than ever to make it happen after seeing how well Jacobs fared.

Indeed, I think most people will agree that a potential Golvokin-Canelo matchup is more fascinating now than it was before the opening bell Saturday.

The “Miracle Man” fought the great Gennady Golovkin on roughly even terms, something no one else has even come close to doing. And many believe he did enough to win, which isn’t unreasonable. A number of rounds could’ve gone either way.

I thought Jacobs generally fought a smart fight, sticking and moving and unloading just enough to win some rounds. Had he been at least somewhat more aggressive – and somehow been able to avoid taking a debilitating punch – he might’ve had his hand raised.

I’m sure Jacobs really believes he did enough to win the fight, as he indicated in the ring afterward, but he also probably is kicking himself because he could’ve done more. He didn’t take many punches but he also didn’t land many, only 14.5 per round, according to CompuBox.

In the end, he still proved beyond doubt in defeat that he is one of the best fighters in the world, which makes him more marketable than ever.

I think an immediate rematch with Golovkin would do well after Saturday night but probably won’t happen because of the money Triple-G stands to make against Canelo, which is an enormous event.

Golovkin-Jacobs II could happen down the road, though. And, for now, Jacobs is in a strong position to get other big fights at middleweight and perhaps at super middleweight. He earned a tremendous amount of respect on Saturday. People are going to want to see how he does going forward.

Srisaket Sor Rungvisai: The Thais have an unusual way of scheduling fights, as if some professional matchups are sparring sessions.

Sor Rungvisai’s previous seven fights going into his showdown with Roman Gonzalez were six-rounders against nobodies in Thailand. The former 115-pound titleholder hadn’t engaged in a real fight since he stopped Jose Salgado in May 2015.

So we really didn’t know what to expect from him on the Golovkin-Jacobs undercard Saturday. What we got was an absolute beast.

Sor Rungvisai, who was stopped in his first two fights but never again, took an astounding number of power punches from Gonzalez, never blinked and never stopped attacking his gifted, more-noted opponent.

I scored the fight for Gonzalez (see the next entry) but, from a purely physical standpoint, Sor Rungvisai (42-4-1, 28 KOs) was impressive. I thought during the fight, “Who the hell is going to want to fight this guy after witnessing this?”

The reality is that many will want to fight him because he is now the WBC 115-pound titleholder for a second time. That and the fact that he beat the top fighter in the world pound-for-pound instantly make him one of the most important little men in the sport.

Maybe there is something to that Thai method of scheduling.

Roman Gonzalez: I thought Gonzalez won. I understand that Sor Rungvisai might’ve been slightly more aggressive than Chocolatito but I don’t think it was effective aggression, at least not as effective as that of the loser.

I thought Gonzalez (46-1, 38 KOs) battled valiantly through a first-round knockdown, repeated head-butts and two grisly cuts that gushed blood into his eyes to land the bigger, much-more-obvious punches in a vintage display of offensive prowess.

CompuBox stats, while far from definitive, back that up: Gonzalez outpunched (1,013-940) and outlanded Sor Rungvisai (441-284) overall, the latter figure being a wide margin.

I wish a fighter as great as Gonzalez, THE RING’s No. 1 fighter pound-for-pound, had not lost his perfect record by a controversial decision but, alas, this is boxing.

On a different subject, I don’t know where Gonzalez goes from here.

One thing that struck me about the fight on Saturday was that Gonzalez couldn’t hurt Sor Rungvisai even though he landed a junior bantamweight record 372 power punches. That reinforced the notion that Gonzalez might not belong at 115 pounds, where he is naturally smaller than his opponents. Many people had the same impression when Gonzalez struggled to beat Carlos Cuadras in September.

I can’t imagine him going back down to 112 at his age, almost 30. And who would he fight at flyweight? The big fights are at 115 for him.

I think Gonzalez will stay at junior bantamweight and give us at least a few more compelling battles like the one we saw against Sor Rungvisai. The first one might be against, well, Sor Rungvisai. Gonzalez certainly earned a rematch.

The weight issue in the Golovkin-Jacobs fight raised a familiar debate: day-before vs. same-day weigh-ins.

Jacobs was not allowed to fight for Triple-G’s IBF title because he refused a second weigh-in Saturday morning mandated by the sanctioning body, which allows middleweights to gain only 10 pounds overnight. Jacobs reportedly weighed as much as 180 pounds when he stepped into the ring, presumably around seven, eight pounds heavier than Golovkin.

So what’s preferable: Same-day weigh-ins that would preclude such an advantage or day-before weigh-ins that allow fighters to properly re-hydrate after the official Friday afternoon weigh-in?

There is no easy answer but I lean toward the current system. I think day-before weigh-ins serve their purpose: Fighters who deprive themselves of liquid to make weight – which has always been a part of boxing – are less vulnerable on fight night because they have time to fully re-hydrate.

Yes, the fact some fighters will have a weight advantage at fight time arguably creates a new safety risk. I look at it this way, though: One, both fighters have the same opportunity to re-hydrate; and two, the danger of dehydration supersedes weight advantages.

What are your thoughts on this difficult subject?

I’m pleased that a prospective super“fight” between Floyd Mayweather Jr. and Conor McGregor is gaining momentum, as Mayweather announced he is coming out of retirement. I chuckle every time I hear McGregor or UFC President Dana White suggest McGregor can beat Mayweather in a boxing match; he couldn’t beat a third-tier junior middleweight. The fact they’re trying is important, though; it means the promotion has begun. Of course, the principals could simply be playing self-promoting games and have no intention of actually making the fight. I think this is real, though. Once again, there is too much money on the table to let it slip away. I’m guessing that a formal announcement will come soon. And I’m in a no-lose situation. An inevitable victory by Mayweather would give boxing a victory over Mixed Martial Arts, which wouldn’t hurt the sport. And it wouldn’t break my heart if McGregor were to somehow upset Mayweather. This is good. … I thought Cuadras (36-1-1, 27 KOs) looked so-so in his unanimous-decision victory over David Carmona (20-4-5, 8 KOs) on the Golovkin-Jacobs card. That had a lot to do with Carmona, though. Cuadras outworked his countryman to build a lead but Carmona was resilient and did some of his own damage later in the fight. Cuadras won the 10-round fight 97-93, 97-93 and 96-94 but didn’t look like the fighter who gave Gonzalez so much trouble. … I was impressed with two rising fighters on display this past week: Ryan Martin and Sergiy Derevyanchenko. Martin (18-0, 11 KOs) dominated capable Bryant Cruz (17-2, 8 KOs) en route to an eight-round knockout on the Golovkin-Jacobs card, showcasing a formidable killer instinct and unusual athleticism. Derevyanchenko (10-0, 8 KOs) stopped Kemahl Russell (10-1, 8 KOs) in five rounds on Tuesday in Tunica, Mississippi. The 2008 Ukrainian Olympian closed the show in spectacular fashion after he hurt Russell. … Heavyweight prospect Adrian Granat (14-1, 13 KOs) was stopped in the first round by veteran Alexander Dimitrenko (40-3, 26 KOs) on Saturday in Malmo, Sweden, Granat’s home country. Don’t write Granat off. He walked directly into an enormous right hand that would’ve hurt anyone. It happens. And kudos to Dimitrenko, who pumped life into his career at 34 years old. He had been written off as a fringe contender, particularly after he was stopped by Joseph Parker last October.