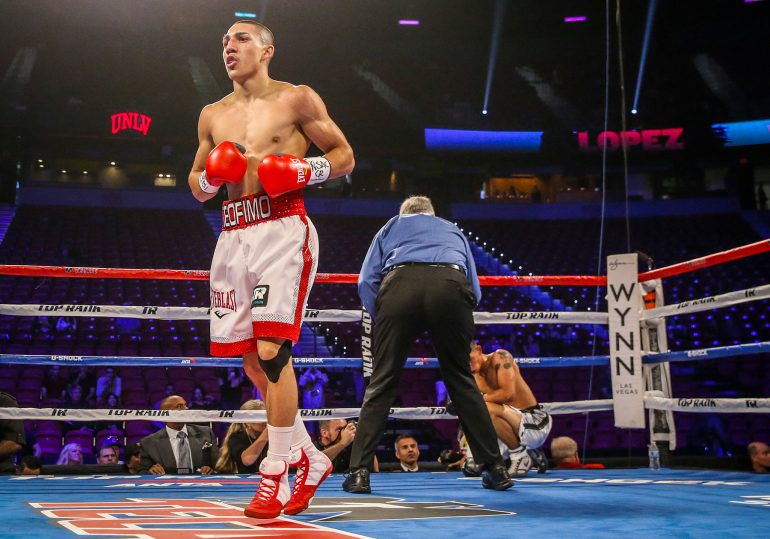 NEW YORK CITY — Teofimo Lopez Jr. calls himself an “old soul.” He is 19 going on 38. The Brooklyn native graduated high school when he was 16, home schooled with the intention of representing the United States at the 2016 Olympics in Rio. When those dreams fell through, with a strong residue of bitterness, Lopez opted to go pro.

On Friday night, as part of Irish Olympian Michael Conlan’s pro debut in the Theater at Madison Square Garden, it was Lopez (3-0, 3 knockouts) that captured the audience’s imagination on the undercard with a second-round knockout of Daniel Bastien (4-3, 1 KOs).

Lopez, a lightweight, talks fast, fights fast and wants to be moved fast.

“I did everything early, and I was born here, but it’s the first time I ever fought in New York, and if someone was to tell me my first fight in New York was going to be at Madison Square Garden, I would have never believed them,” Lopez said. “I’m grateful for the opportunity that Top Rank has given me and I’m excited for what’s more to come.

“My body is young, but I feel my soul is old. I’ve had so many corrupt things happen to me with USA Boxing, with political stuff, that got my mind right. I’ve been stomped on my whole life.”

“They gave Balderas the spot, he was given it, he didn’t take it,” Lopez said. “I really hope Top Rank negotiates a fight with him in years to come. I never fought him. I never got that chance. I stayed composed for this fight. I’m not an amateur, I fight like a pro. Top Rank is moving me great and I want to keep showing that there is more to come.”

Lopez remained undefeated in the scheduled six-round lightweight fight with Bastien, knocking out him at :39 of the second round. Bastien engaged Lopez early, with looping rights, but Lopez comported himself well. His defense was tight and he wasn’t rattled. By the second round, it was over. Lopez exploded with numerous shots to the body, then closed with a flurry of punches to the head.

That was enough for Bastien, who took a knee and referee Shada Murdaugh stood over him and counted to 10.

Lopez celebrated his victory with a front flip. He may have needed more exertion for that than anything Bastien did.

“This is just the beginning,” Lopez said.

On other undercard fights:

Junior welterweight Alex Saucedo improved to 24-0, with 15 KOs, after plowing through Johnny Garcia (19-4-1, 11 KOs) at 2:42 of the second round. Saucedo basically used Garcia as a human punching bag for about six minutes. Garcia never had a chance, before the end came when referee Steve Smoger graciously stopped it.

Despite his record, Jhovany Collado is game. He could take a punch and isn’t afraid to unleash a few times himself. But Jose Gonzalez proved to be a little too much in a six-round featherweight victory. Gonzalez (7-0-1, 2 KOs) remained undefeated in knocking down Collado (4-12-2, 1 KO) in the first and fourth rounds.

Gonzalez methodically broke down the tough Collado mixing his attack with body and head shots. It was good enough to prevail, 60-53 on all three scorecards.

In the first fight of the night, Larry “Lethal” Gleeson, from Clones, Ireland, knocked down Gabriel Solorio (2-4-1) in the first round en route to a unanimous decision by scores of 40-35 (3) in a four-round welterweight fight. The muscular Gleeson (3-0, 2 KOs) was fun to watch, but he did take some unnecessary shots from Solorio, whose wide punches came with a jiggle from his soft middle.

As the final seconds ticked down to close the third, Gleeson nailed Solorio again with a stunning right. By then, it was pretty academic that Gleeson had the fight won. It served a lesson for the 26-year-old in defense though.

Junior lightweight Robson Conceicao (3-0, 2 KOs) made fast work of Aaron Hollis (4-4, 2 KOs), stopping him at :36 of the second in a scheduled six-rounder.

In the comic-relief bout, a scheduled four-round junior welterweight street fight between lanky Ben “The Bee” Garcia and Alexander Picot, Picot knocked Garcia down in the second, then proceeded to give “The Bee” a beating the rest of the round causing Smoger to take a good look at the teetering Garcia.