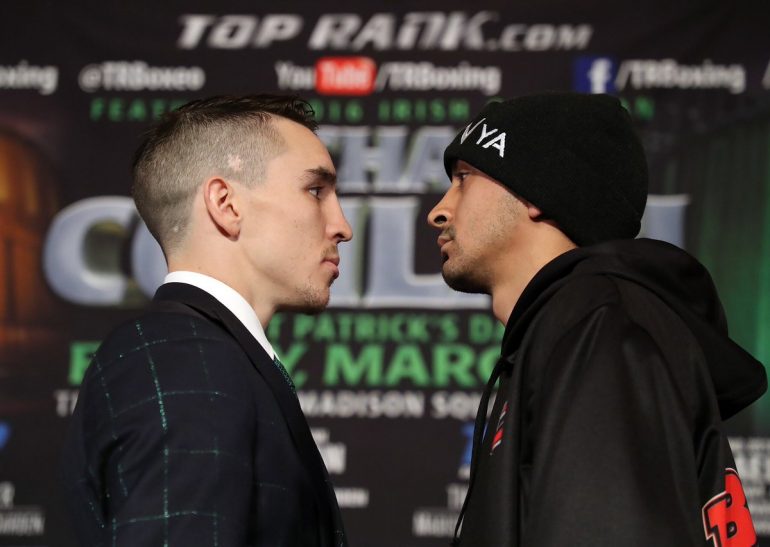 If Michael Conlan wins tonight in his pro debut against Tim Ibarra, as expected, he could likely appear next on April 22 in Carson, California on the undercard of a Top Rank pay-per-view that will feature Oscar Valdez, Gilberto Ramirez and Jessie Magdaleno in separate title bouts.

If that happens, he would be paired on the same card with the fighter he will probably be measured against as he progresses in his career: U.S. Olympic silver medalist Shakur Stevenson, who is set to make his pro debut on the April 22 card from StubHub Center.

“It’s a possibility,” Conlan, the Irish Olympian, told RingTV.com earlier in the week before his press conference at Madison Square Garden of the April 22 appearance. “I was going to be on the Pacquiao undercard but that kind of fell through so I think they’re looking at other options. I think they’re looking at Boston possibly or else on the April 22 card. It would be great to have both of us on the card,” he said of Stevenson. “It would be a good way to kind of build that rivalry.”

Promoter Bob Arum, who signed Conlan in September and then inked Stevenson in a surprise move in February, has spoken of moving the two fighters — they both fight around 126 pounds and are both 2016 Olympians — at an equal pace and then matching them against each other in what he described as a classic for the era. “I’m predicting in five years we’ll have the next Leonard-Hearns fight,” said Arum in February, “and it will be Shakur and Conlan.”