Arum to announce project he hopes changes direction of sport 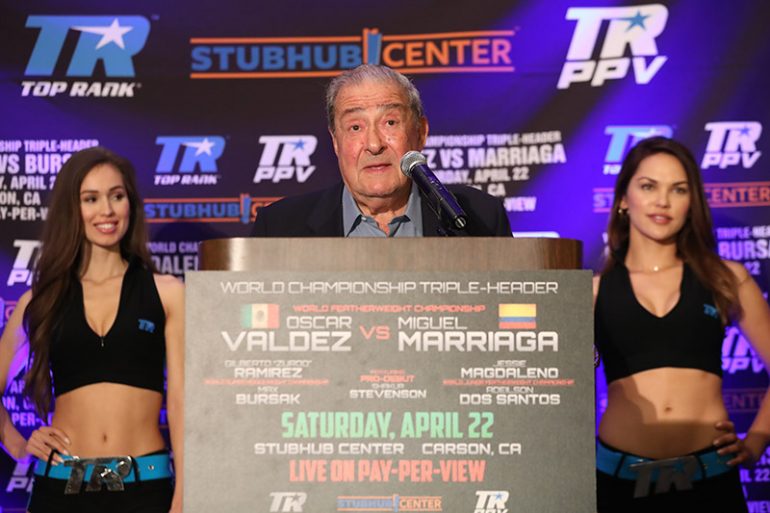 Bob Arum expects counter-programming to become more commonplace in the near future between his company and rival networks such as Showtime once he rolls out an ambitious venture he says will be global in reach, change the direction of the sport and put to work the vast amount of young fighters Top Rank has snatched up in recent months.

“We’re going to program without regard,” Arum told RingTV.com on Wednesday of the coming endeavor, which he said will continue to amass steam with the Thursday announcement of another 2016 Olympic gold medalist from the Rio Games that Top Rank has signed, who Arum declined to reveal.

Because of the big announcement, Arum wasn’t displeased that Showtime has a telecast with Shawn Porter and Andre Berto going up against a Top Rank-produced pay-per-view on April 22 with Oscar Valdez, Jessie Magaleno and Gilberto Ramirez in separate title bouts and the pro debut of U.S. Olympic silver medalist Shakur Stevenson.

“I guarantee it’s going to happen more often,” Arum told RingTV.com of counter-programming. “When we roll out what we’re doing, it will definitely happen more often. I don’t want to talk about it but I’m telling you we’re going to program without regard to what anyone else is programming. It puts boxing in a better position, elevating boxing to the point where it was a major sport. How do you think it makes me feel when newspapers in this country give so little coverage to the sport? It’s symbolic of where the sport stands. And that’s what we’re going to change with what we’re doing — I guarantee you that.”

Arum declined to go into further detail on his coming undertaking, deflecting questions on whether Top Rank would produce the telecasts or where they would take place or when. “Global, global,” Arum said of the enterprise. Arum spoke of his pending venture in response to a question about Richard Schaefer’s big announcement last week to stage a far-reaching boxing tournament with $50 million in prize money.

“I’m not going to be a naysayer,” Arum said of Schaefer’s plan. “But I don’t necessarily agree with him but that’s fine,” regarding a tournament format. “Let him try what he’s going to do. We’re going to go in a different direction with what we’re doing. That’s why we have signed, including Michael (Conlan, the 2016 Irish Olympian who makes his pro debut Friday on St. Patrick’s Day at Madison Square Garden) and Shakur Stevenson, a group of young fighters who are just starting out, probably stronger than what any promoter has done, probably since 1984 when Main Events signed virtually the whole Olympic team. And look what came of that? Great, great fighters, great events, great for boxing.”