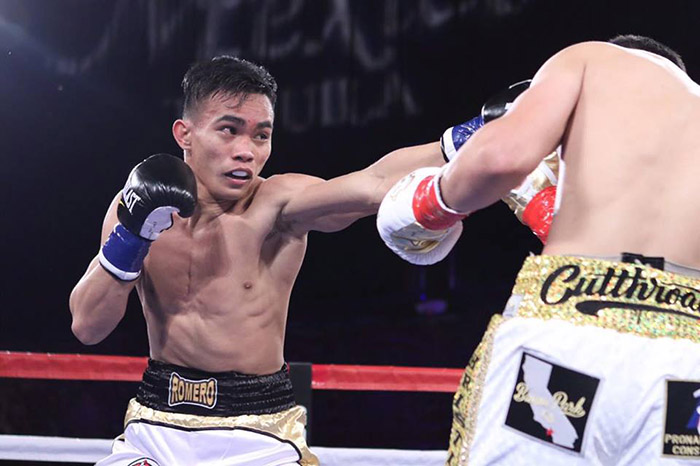 MANILA, Philippines – At the age of 17, Romero Duno accepted the 3,000 pesos (roughly $60) from his parents, packed his bags and his books and headed for the bus terminal in his hometown of Tagum City, Philippines.

His parents believed he was heading back to the Davao City campus of University of Mindanao to begin his second year as a marketing student. He had other plans. He was heading to General Santos City to become a professional boxer.

The subject of boxing had long been a source of arguments in the Duno household.

His father, who worked hard operating the family’s sari-sari store (a small general merchandise store usually connected to a home) to put food on the table for Duno, his sister and five brothers, supported Romero’s dream of chasing boxing stardom. His mother was adamant that he follow his siblings’ path and get a post-secondary education.

“That’s why they always argue about me,” says Duno, now a 21-year-old lightweight boxer, about his parents, Nepthalie and Victoria.

Duno’s friend John Vincent Moralde, another unbeaten prospect, put him in contact with a boxing promoter named Jim Claude Manangquil four hours down the road in GenSan. Duno ended his first phone call with Manangquil prematurely due to the fighting going on in the background. Then, only he and his new promoter knew where he was heading when he left his family’s home that day.

“I just wanted to stand and succeed with my own way,” said Duno. 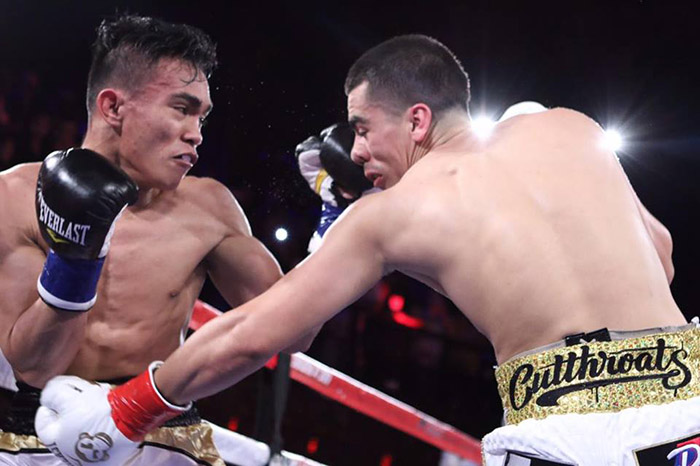 Less than three years later, last Friday, Duno was standing in the middle of a boxing ring in Los Angeles with his arms raised in victory, his no-longer undefeated foe, Christian “Chimpa” Gonzalez, having been felled in two rounds by Duno’s heavy hands in a shocking upset.

The first knockdown came in the first round from a short right hand on the jaw; Gonzalez got up but was staggering at the bell. The second knockdown came from a looping right which didn’t seem as devastating but made Gonzalez collapse back to the canvas, where he remained for several minutes.

It was Gonzalez who entered the ring as the heavily touted prospect and Duno as the “opponent.” A couple of minutes later Gonzalez was exiting on a stretcher and it was Duno who was suddenly in demand. 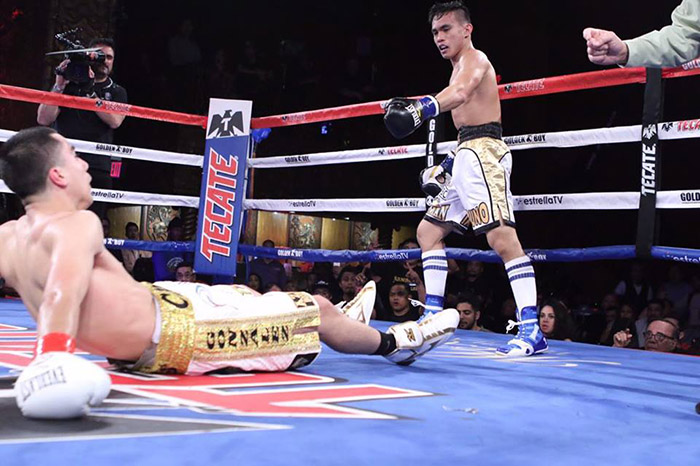 Romero Duno knocks Christian Gonzalez down in the first round of their March 10 fight, which Romero won by an upset knockout in Round 2 (Photo by Jhay Oh Otamias)

“Everybody was all over us and treating Duno like the next big thing from the Philippines,” says Sanman Promotions head Manangquil, himself just 23 years old. Manangquil, the son of wealthy fish exporters in GenSan, is still in Los Angeles with Duno and says he’s fielded several promotional offers. “It’s like the second coming of Pacquiao where he stopped Ledwaba.”

Before Duno could box, he could fight. He first picked up the sport at age 14 after getting into a fistfight with a classmate who was a known local boxer. Duno, despite having no formal training, whipped the boy.

The boy’s father was a boxing trainer and took him on as a pupil, not wanting to miss out on an opportunity to bolster his stable.

READ: The search for new boxing stars in ‘GenSan’

Duno had a limited amateur background, competing locally but never making it to the national tournaments. When he arrived at Sanman Gym to turn pro, he was known as a hard-hitting puncher with limited technique.

His lone defeat, an eight-round decision loss to Mikhail Alexeev in Russia last May, was a fight closer than the scores indicate, Manangquil says. In an act of gamesmanship, he says the organizers brought Duno out of his room at 2 a.m. the day of the weigh-in to shoot a commercial for two hours.

To get ready to face Gonzalez, Duno relocated to the Wild Card Gym last December to train with Rodel Mayol, a former WBC junior flyweight titleholder from the Philippines. Mayol saw a raw specimen which had to be fine-tuned to be most effective.

“First of all, Duno is very talented and a powerful punching boxer. I just needed to develop his head movement and accurate punching and the footwork,” said Mayol, who fought in 39 bouts between 2000 and 2012.

“He had the power already but he cannot hit his opponent, so it was useless. But because of his will and hard work, he got it.” 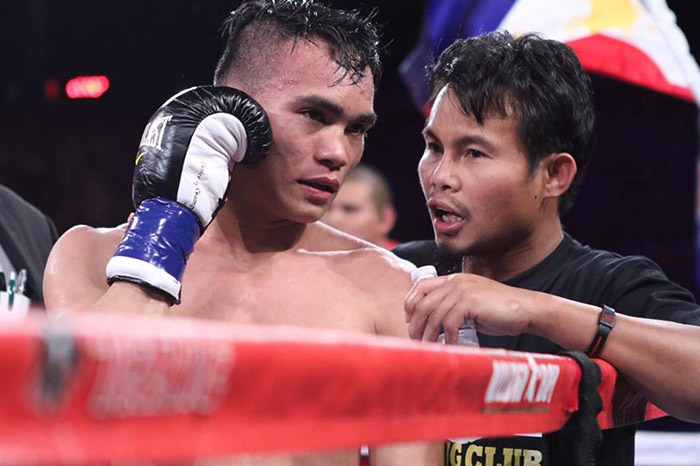 Now Mayol, who has been around all of the top fighters in the Philippines, from Pacquiao to Donnie Nietes to Brian Viloria, thinks he has a special fighter on his hands. He expects Duno to be a world champion in his next five fights.

“He is the young GGG,” Mayol told this writer in a Facebook message, referring to Gennady Golovkin. “He is a very exciting fighter, he can take and give punches and that’s what boxing fans want.”

Even after his early success, Duno’s parents still loom large in his life. On a recent phone call, his mother begged him to quit boxing and return to school. His father? “He said that I need to be careful. That’s all,” Duno says with a laugh.

Duno will be back in General Santos City on March 22, where he’ll be greeted with a “Heroe’s Welcome” at the airport at 8:30 a.m., followed by a parade and a meeting at the mayor’s office.

“I just want to make my own story, but I dream to become a world champion like Manny,” Duno says of his goals in boxing, before adding another: “To make my father proud.”

Duno isn’t sure if his parents will be among those at the airport in GenSan to greet the Philippines’ latest boxing newsmaker, but he can be sure that they’re proud of what he’s done so far.