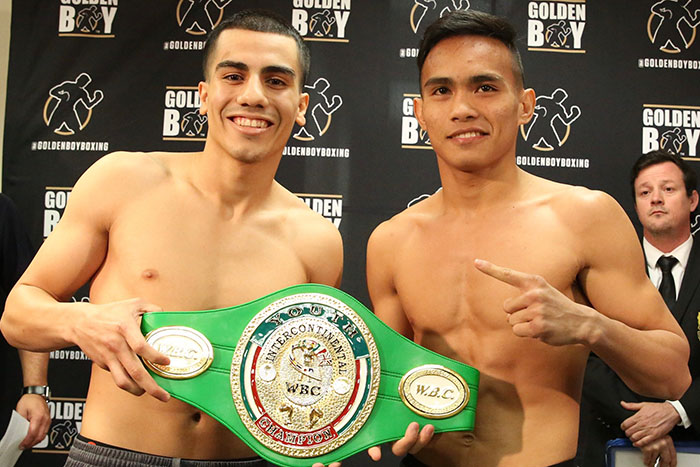 In a battle of 21-year-old power-hitting prospects Romero Duno upset Christian Gonzalez by stopping the hometown favorite in the second round of their LA Fight Club main event on Friday at Belasco Theater in Los Angeles.

Duno (13-1, 12 knockouts), a lighting-fast counter puncher from the Philippines, dropped Gonzalez (16-1, 14 KOs) with a quick right cross in the final 20 seconds of Round 1 and blasted him with another short cross about 45 seconds into Round 2 of the scheduled eight-round bout that was televised on Estrella TV and streamed live on RingTV.com. Gonzalez, of Buena Park, California, was in control for 2 minutes and 40 seconds of the opening round (landing a few head-twisting power shots as he stalked the Filipino fighter) but never recovered from the first knockdown (and was, in fact, saved by the bell).

Although Gonzalez got up from the second knockdown, referee Tom Taylor saw the heavy handed youth was on wobbly legs and waved the fight off 57 seconds into Round 2. Gonzalez fell flat on his back (knocked over by the mere touch of Taylor’s hand to his shoulder) as quickly as he got up after the fight was stopped and was taken out of the ring on a stretcher for safety purposes.

In the co-featured bout of the Golden Boy Promotions show, junior middleweight prospect Alexis Rocha walked down and and wore down Marcus Beckford to a technical stoppage after four rounds. Rocha (7-0, 5 KOs), a 19-year-old southpaw from Santa Ana, California, dropped Beckford (3-6-3, 1 KO), a tall-and-rangy 23-year-old southpaw from Long Island, N.Y., with the first power shot he landed in Round 1 and put the difficult journeyman down in Round 2 with a body attack.

Beckford surived Rounds 3 and 4 with constant movement and lots of holding but Rocha methodically cut the ring off, got inside and went to work with both hands. Beckford’s corner stopped the bout before the start of Round 5.

In the opening bout of the televised portion of the card, East L.A. standout Angel Bojado was upset by little-known Colombian Jhon Leon in a four-round bout of 1-0 fighters. Leon (2-0), a tall-and-rangy 23 year old, outboxed Bojado, the younger brother of former popular TV fighter Francisco Bojado, by controlling distance with his long jab.

Leon, who won by unanimous scores of 39-37, kept an out-of-shape-looking Bojado (who missed weight for this bout) at arm’s length, landed one-two combinations in Rounds 1 and 2 before stepping up his aggression and outworking Bojado over the next two rounds.