Claressa Shields headliner is sold out 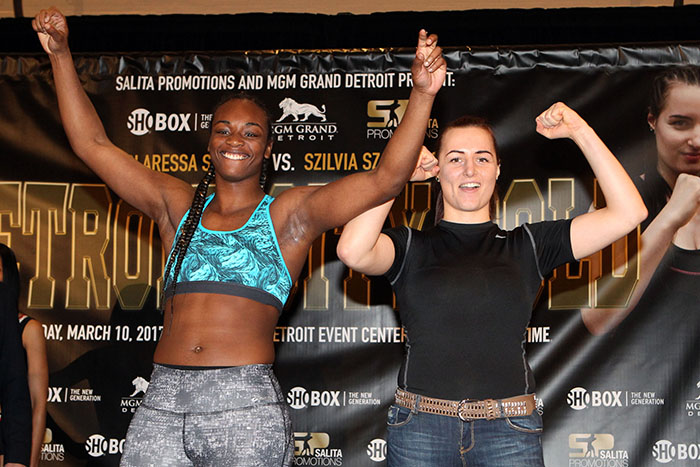 Want to see Claressa Shields in her second pro outing, which takes place tonight in Detroit? Then you will have to watch it on TV; the joint, the MGM Grand Detroit, is sold the heck out, according to the event promoter Dmitriy Salita.

The Ukrainian born dealmaker, who has made Brooklyn home, is making Detroit his business base. He’s been offering solid bouts, and the masses are responding.

Salita has run shows at the Masonic Temple, in downtown, and this is his first at the MGM. Salita has been on a tear, as the hottest young promoter in the mix. He’s now a ShoBox perennial, and tonight, a bunch of bouts will be showcased. The main event sees 1-0 Shields, a two time gold winner, meets Szilvia Szabados, a 15-8 Hungarian. She is 26, and is 4-3 in her last seven. She appears not to be intimidated by Shields’ stony demeanor, which resonates a ferocious confidence.

The NABF middleweight title, now vacant, is up for grabs.

Viewers on site and those watching on Showtime, which kicks off at 10 p.m., will see Antonio Nieves against Nikolai Potapov, with the WBO/NABO bantamweight crown up for grabs. The 17-0-2 Ohioan Nieves  and the 16-0-1 Russian have comparable power, both are average. Potapov could be the more accurate guy and volume could be the difference maker. Who wants it more, who will be busier?

Nieves mixes his punches nicely and is a relaxed presence in the ring. Pota will have to be ready to defend in tight, and Nieves is pretty mobile. He has solid stamina, and bangs smartly to the body.  He stays focused on defense, and all around, is a good looking pro.

Potapov sometimes waits too much. He’s promised to fight with more urgency tonight. He likes to work mid-range, can lead and counter, and feints sagely. His footwork is sometimes not as clean as Nieves.’ He can get backed up, pushed around and sometimes backs straight up.

Welters Wes Tucker (13-0) comes in from Ohio to try and mess it up for Detroiter Ed Williams (12-1-1). Williams has to watch his footwork and stance, he squares up too much sometimes.

Solid records all around; as per usual with ShoBox, which has elevated itself in the last two years, with all the promoters knowing that their guys won’t be there to do a record builder.

CLARESSA SHIELDS:
“I know about Laila Ali, and Christy Martin and Lucia Rijker, and I don’t box like any of them. I have my own unique style. I’ve never seen a female fighter like myself. I want to carry the sport.

“The boxers I like and study are Sugar Ray Robinson, Joe Louis and Floyd Mayweather. Those are my favorites. And you can even throw Sugar Ray Leonard in there, too.

“This is my hometown fight. I last fought in Michigan three years ago. I’m going to showcase my skills on Showtime.

“I’m embracing all of this. I grew up and heard when I was young that women can’t fight. I’m ready to show everyone just how wrong that is on Friday night.”

SZILVIA SZABADOS:
“I know Claressa is popular because of the two gold medals, and she’s young and 21. This is her hometown so I know the fans will be cheering for her. Congratulations to her. But I just have to worry about fighting my fight and staying focused.

“I know she’s a come-forward fighter like me. Always go, go, go. I don’t know what she’ll bring. It’ll be a surprise. Everyone always has a plan and I have a plan, as well. But I’m willing to change and improvise.

“I’ve been sparring with men mostly. It’s hard to find girls who can spar with me, especially in Hungary.”

ANTONIO NIEVES:
“I’m ready to go. I’m ready to show that night [a draw against Alejandro Santiago] was a fluke. There are no distractions this time.

“I’m ready to show people that I’m a contender at this weight.  I’m here to prove that I deserve to fight for a world title.”

NIKOLAY POTAPOV:
“I’ve improved a lot working with Javan [Javan SugarHill Steward]. The sky’s the limit for me and I know I can be a legitimate contender in my division.

“There are going to be a lot of eyes on this fight so it’s important that I look good and get the victory.  We’re both undefeated, and we’re both ranked, so there is a lot on the line in this fight.”

WESLEY TUCKER:
“I’m going to be the next world champion from Toledo. I’m a lefty and have power in both hands and I’m a pressure fighter.

“My right hook is my best punch and that’s rare for a lefty.

“I know Ed Williams. He’s a nice little boxer, long and rangy. That’s about it.

“I’m going for the knockout and it may come early, or it may not. No matter what, I always put on a good show.”

ED WILLIAMS:
“This is one of the fights that will determine whether I continue and move up, or I do something different. This is it. That’s what ShoBox has always been about for fighters like me.

“I took a break from boxing and got my college degree in industrial engineering. But I got the bug and came back. Things would have been much different if I would have stayed with it. I’m not doing anything with my degree yet, but will once I’m finished with boxing.

“I’m older but I don’t have many miles. I’m well-preserved. It’s going to be exciting and I’m looking forward to an exciting fight.”

JAMES GORDON SMITH:
“I’ve never lost to anyone from Chicago, and Friday night will be no different.

JOSHUA GREER, JR.:
“It’s not my first undefeated fighter I’ve fought so it’s no big deal. I know what I have to do.
Sure, we were going at it pretty good at the press conference. You can say it’s a Chicago-Detroit thing. Of course there’s a rivalry there.

“I’m fast, but people underestimate my power. My power is a bigger strength than my speed. It’s something not a lot of people expect of me.

“You will see fireworks from round one.”