If Golovkin fights June 10, Canelo-GGG in the fall would be in jeopardy 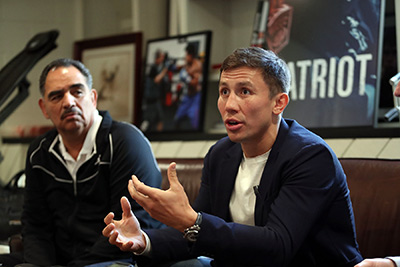 A rumored middleweight unification match between Gennady Golovkin and Billy Joe Saunders for June 10 would jeopardize plans for Golovkin to face Canelo Alvarez in the fall or at least push it back to a later date, Golden Boy President Eric Gomez told RingTV.com on Wednesday.

Multiple sources have indicated to RingTV.com that Golovkin promoter Tom Loeffler and Saunders, who holds a WBO middleweight title, have had extensive talks about a fight in Golovkin’s native Kazakhstan on June 10. While Loeffler denied a deal is in place on a conference call on Tuesday for June 10, he did admit in a discussion about a fight ostensibly on that date that he’s been in contact with different promoters for potential fights. Gomez suggested that wasn’t a good idea if a fight between Golovkin and Canelo takes place in the fall.

“We need enough time to promote a big fight,” Gomez said. “You have to do the (media) rounds. You have to do all these TV shows. There’s so many plans we have and we’ve talked about promoting a big fight. You need time.” Gomez said that Loeffler has mentioned to him “there is an offer” to Golovkin for June 10. “But he said they’re committed to making the fight with Canelo,” Gomez said of Loeffler and Golovkin.

“Our first goal is to make the fight,” Gomez said he was told by Loeffler. “And I said, ‘Ok great.’ But if he does something in June, then it could jeopardize of push it back at least.” Of course, Golovkin has to get by Danny Jacobs on March 18 at Madison Square Garden on HBO PPV in a bout for Golovkin’s WBC/IBF/WBA titles. And Canelo has to outstrip Julio Cesar Chavez Jr. on May 6 at T-Mobile Arena in Las Vegas on HBO PPV.