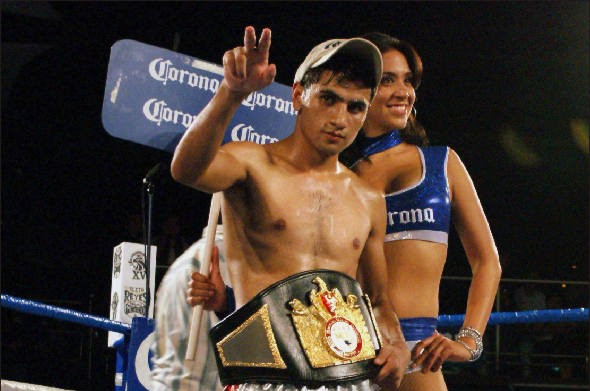 With the win, Navarrete captured the vacant WBC flyweight title and improves to 34-2 (with 25 knockouts).

Navarrete, who hails from Mexico City, and Kaikanha vied for the WBC title that Roman “Chocolatito” Gonzalez vacated in late September after winning the WBC junior bantamweight title from Carlos Cuadras on Sept. 10.

The WBC ordered the fight between the highest-ranked contenders, which were Kaikanha (the mandatory challenger) and Navarrete, who was ranked number two.

Entering the fight, Kaikanha was ranked No. 7 by THE RING magazine.

From the opening bell, Kaikanha pressed the action as Navarrete moved side-to-side around the ring. Kaikanha’s tactic almost paid off a minute into round two, as a right hand seemed to momentarily stun Navarrete.

Kaikanha continued to walk Navarrete down, but ran into trouble midway through round three when he was hurt by an uppercut from Navarrete. Kaikanha stumbled backwards against the ropes where Navarrete unleashed a barrage of punches, finally putting the Thai fighter down with a sweeping left hook.

After Kaikanha beat the count, Navarrete went in for the kill, landing a barrage of punches against a defenseless Kaikanha in a corner, prompting American referee Thomas Taylor to intervene and stop the bout at 2:29.