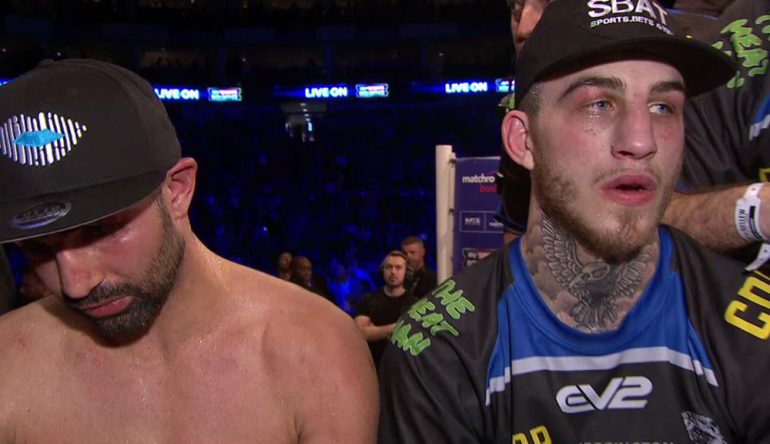 The near 17-year career of Paulie Malignaggi has likely come to an end after the two-division titleholder suffered an eighth-round stoppage to Sam Eggington on the David Haye-Tony Bellew undercard on Saturday in London.

Malignaggi (36-9, 7 knockouts) was paralyzed by a left to the body midway through Round 8. As the 36-year-old veteran turned away in pain, Eggington nailed him to the temple with a short right cross, ensuring that the award-winning TV commentator remained down for the count.

Malignaggi, who had his moments during the boxer-vs.-stalker crossroads match – including a vicious two-handed salvo at the end of Round 6 – and was ahead on two of the three official scorecards after eight rounds, was counted out at 1:50 of Round 8.

“This is the biggest fight of my career, so to win it was obviously a huge, huge step,” said Eggington (20-3, 12 KOs), a 23-year-old pressure fighter from the Worcestershire area of England. “It was (the same body punch) I got (Frankie) Gavin with. I’ve used it against other fighters, good to see that it can work against a veteran like Paulie.”

Malignaggi, who has won major world titles at junior welterweight and welterweight, was gracious and loquacious in defeat.

“It was one of those body shots that gets you perfectly,” he said during the post-fight interview with Eggington sitting beside him. “Ten seconds is not enough to recover. Twenty seconds, and I would have been fine.

“I could see him improving as the fight progressed. He got better, made adjustments during the fight. So, if there’s a silver lining to this fight, if I can’t win the fight, I feel good knowing that my role as a wily veteran helped make a younger fighter get better.

“I didn’t want to make a choice before the fight, but I feel like I’ve got a great job watching young fighters come up from ringside and living through them,” said the Brooklyn native, who commentates for both Showtime in the U.S. and Sky Sports in the U.K., where British boxing fans have adopted him. “I hope I have that job for years to come. I probably am done (boxing).” 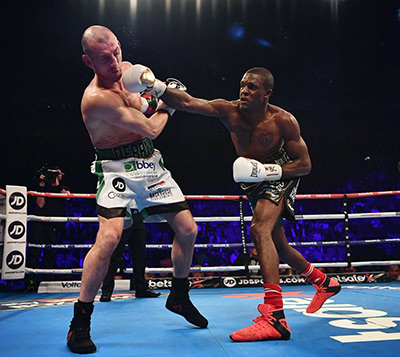 Malignaggi was not the only respected veteran to call it a career on the Haye-Bellew undercard, former WBA interim, Commonwealth and British lightweight champ Derry Mathews announced his retirement after being stopped in Round 3 by junior welterweight prospect Ohara Davies.

Matthews (38-12-2, 20 KOs), a hardnosed 33-year-old scrapper from Liverpool, was dropped twice in Round 3 by huge right hands from Ohara (15-0, 12 KOs), a 25-year-old boxer-puncher from London. Mathews, who was coming off back-to-back losses to lightweight up-and-comer Luke Campbell and WBO titleholder Terry Flanagan, got up on shaky legs before absorbing a right uppercut and being overwhelmed along the ropes.

A full ringside report on the Bellew-Haye main event and key undercard fights by Elliot Worsell will be posted after tonight’s main event.