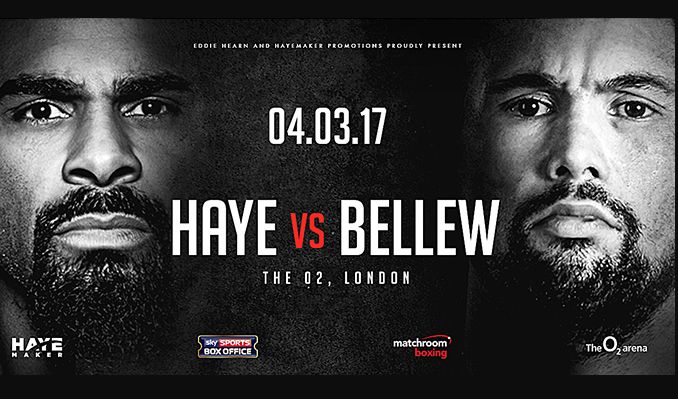 They normally operate in different divisions so a disparity in weight between the pair was always expected. Some fans may actually have anticipated a bigger disparity.

David Haye, the former unified cruiserweight champion and WBA heavyweight titleholder, weighed in at 224.9 pounds for the super-hyped 12-round non-title bout. That number is consistent with Haye’s two comeback fights which took place last year, and the Londoner looked to be in excellent fighting shape.

“(Tony Bellew) has never been hit by a heavyweight,” said Haye when interviewed by Sky Sports News in the U.K. “He may have employed a couple of sparring partners but none of them hit like I do. He doesn’t know the power I possess. This is “The Haymaker 2.0” I’ve been telling you about. He doesn’t pay the price (in the gym) and I do.”

Bellew, the reigning WBC cruiserweight titleholder, was a few pounds over what he predicted at 213.8 pounds. The Liverpool native said last week that he expected to be between 204 and 205, but he has clearly elected to get nearer to his opponent who has campaigned at heavyweight for 7-and-a-half years.

“He quits,” said Bellew, who is rated No. 3 by THE RING at cruiserweight. “He’s going to gas. I’m not going to be easy to hit in those first four rounds. I’m going to knock ten bells out of him. He’ll get hit back for the first time in 6 years. When the fight goes out of him, fat boy is going to get him and he is going to quit.”