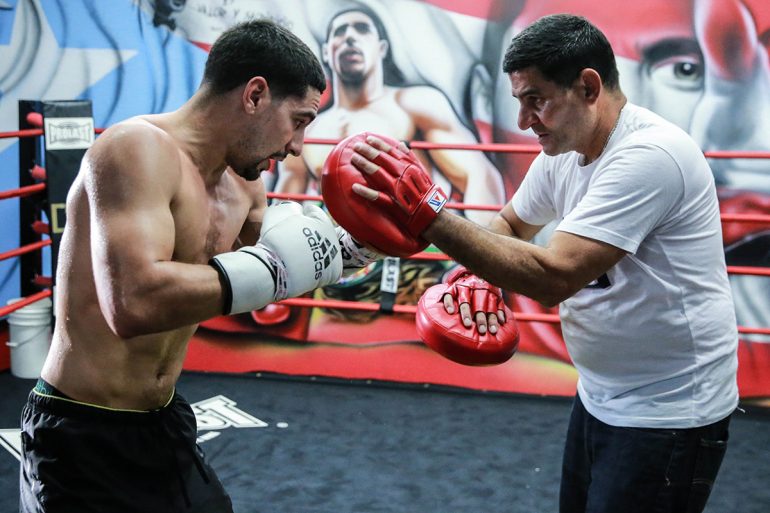 Angel Garcia met with officials from the New York State Athletic Commission to determine if he will be granted a license to work his son Danny Garcia’s corner for his welterweight unification clash with Keith Thurman on Saturday in Brooklyn, a spokesman for the Commission told RingTV.com.

The meeting took place last Wednesday to see if Angel Garcia is “suitable” to be licensed in the state, according to commission spokesman Laz Benitez, and centered around Angel Garcia’s tirade during a press conference at Barclays Center in Brooklyn last month in which he hollered racist and xenophobic language directed at Thurman and in front of fans and media in attendance. “The Commission met with Mr. Garcia regarding his request for licensure and will make a determination before the March 4 event,” Benitez wrote in an email to RING on Monday. Garcia met with interim Executive Director, Tony Giardina, interim Chairperson, Ndidi Massay and Director of Boxing, Eric Bentley.

A message left for Angel Garcia was not immediately returned. It would be a major surprise if the commission ruled against Angel receiving a license so close to his son’s fight. Danny Garcia has threatened to pull out of the fight if his dad isn’t allowed to be in his corner. Thurman has even voiced support for Angel receiving a license while stating he hopes he is banned from any further press conferences before or after the fight.

The bout between WBC champion Garcia (33-0, 19 knockouts) and WBA titleholder Thurman (27-0, 22 KOs) will take place at Barclays Center in Brooklyn on CBS and is regarded as one of the best matchups that can be made in the sport.