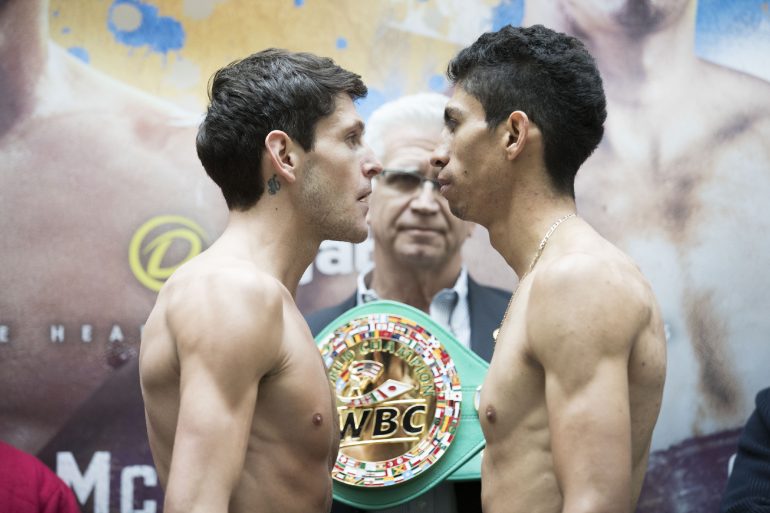 Unbeaten Mexican Rey Vargas didn’t live up to his reputation as a knockout artist against Gavin McDonnell, but he displayed plenty of finesse in posting a 12-round majority decision to capture the vacant WBC junior featherweight title Saturday in Hull, England. The official scores were 117-111, 116-112 and an inexplicable 114-114.

Vargas, who is rated No. 4 by THE RING at 122 pounds, controlled the majority of the sessions but didn’t have it all his own way.

The visitor stalked McDonnell aggressively from the opening bell and landed plenty of heavy shots. The Englishman, although adept defensively, struggled to find opportunities of his own, and although he landed a few nifty counters, Vargas outpunched and outworked him throughout the early going.

McDonnell had a better Round 5, although the session was far from one-sided. Motivated by a raucous home support, he applied educated pressure and landed well with the right hand and some effective body punching. Vargas responded with flurries of power shots to the head and body, and McDonnell, despite putting forth a gallant effort, was busted up around the eyes.

As the rounds progressed, Vargas got more comfortable and accepted the role of boxer. He moved around McDonnell and scored with some classy flurries, and his sharper work was carrying the day. The home fighter did not stop trying, however, and had significant success with single rights to head and body. McDonnell’s best round was the 10th, when he snapped Vargas’ head back on several occasions.

McDonnell kept his foot on the pedal in the championship rounds but the clock became his enemy. Vargas had built up an insurmountable lead and McDonnell (16-1-2, 4 knockouts) needed a late stoppage which, would have been completely out of character for him. It was a brave performance from the amiable man from Doncaster and his stock will have risen in defeat.

This was always going to be a tough can of worms for McDonnell. Undoubtedly talented and determined, he was facing an opponent with significant advantages in height, reach and punching power. Vargas’ strengths will present a nightmare for many opponents at 122 pounds.

The line to face Vargas (29-0, 22 KOs) wasn’t exactly stretching around the block, although it will undoubtedly grow now that he’s armed with a world title belt. He performed well enough tonight and there are some intriguing fights ahead for him.

Ian John Lewis, the British judge who scored the bout even, needs to give himself a shake.