Orlando Salido could appear on May 6 PPV undercard 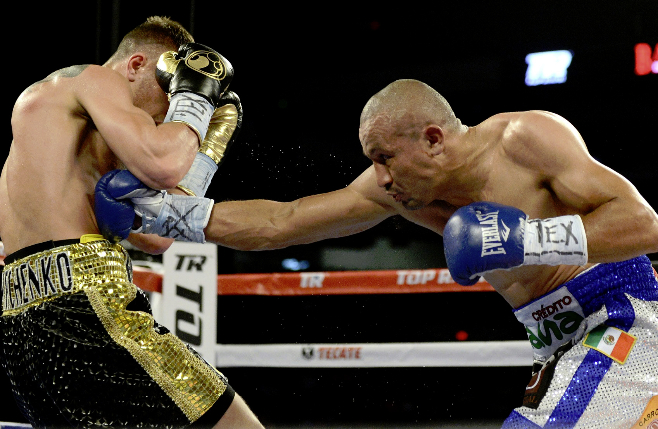 Saldio (right) on the attack vs. a 1-0 Lomachenko.
22
Feb
by Mitch Abramson

Orlando Salido could fill a slot on the HBO pay-per-view undercard for Canelo Alvarez-Julio Cesar Chavez Jr. on May 6 in Las Vegas against an undetermined opponent, Golden Boy President Eric Gomez told RingTV.com on Tuesday. Golden Boy has options on Mexico’s Salido (43-13-4, 30 knockouts) after he fought to a draw against Francisco Vargas last June, Gomez said.

“We’ve talked about the possibility of him being on the card,” Gomez told RING. “We have an option on him, and so that’s one of the ideas we have but we haven’t decided yet.” Earlier in the day, Salido’s manager Sean Gibbons told a pair of reporters that Salido, a former two-division champion and one of the most exciting fighters in the sport, was being discussed as the co-feature on May 6 at T-Mobile Arena.

“There’s talk maybe of fighting on this card,” Gibbons said before a press conference in Manhattan for Canelo-Chavez Jr. “They’re supposed to give us a decision in the next couple of days. Salido would be the co-feature.” But Gomez said it still hasn’t been decided where he will fit in on the undercard. Lucas Matthysse will return for the first time since he sustained an eye injury against Viktor Postol in October of 2015 on the May 6 card and it’s possible he could perform as the chief supporting bout to Canelo-Chavez on the pay-per-view.

Golden Boy is currently sifting through a short list of possible opponents for Matthysse, though Gomez declined to reveal any names. “We’re down to a couple opponents,” Gomez said. “We’ll announce that shortly. Right now, he’s on the undercard. We have a bunch of ideas.” Sadam Ali could also appear on the May 6 PPV, Gomez said. “Sadam is ready to step up again,” Gomez said after Ali has won two straight since he was stopped by Jessie Vargas in the ninth round last March for a vacant welterweight title. “He wants a big fight again so he’s a possibility, something we’re considering. He’s got his confidence back. He’s back.”