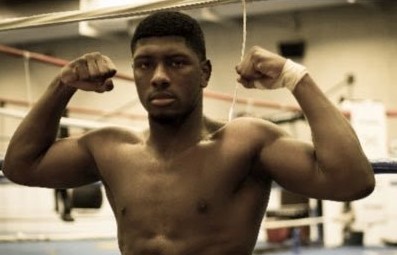 Montano, 18, from Houston, Texas, was the No. 1 ranked light heavyweight in America.

He was heavily courted but elected to sign with Dunkin, who has managed a cache of top fighters including Kelly Pavlik, Tim Bradley and Diego Corrales. Currently he represents pound-for-pound talent and THE RING magazine/WBC/WBO junior welterweight champion Terence Crawford, Nonito Donaire and Jessie Vargas, as well as a host of up-and-comers.

It was an easy decision for Montano to make.

“I felt like it was time for me to fight at another level,” Montano said. “There’s a lot of good competition at national and world level. I’ve seen all types of fighting styles and I felt the Olympics is four years away and, in four years, I can do so much more in the pro game.

“That’s a long time. That’s four years of my life wasted in the amateurs for the Olympics, where, in that time, I feel I’ll have a shot at the world title (as a pro). I can become a world champion in that time and you never know what happens in the amateurs. The amateurs is full of politics.”

Last December, he competed internationally at the Youth World Championships in St. Petersburg, Russia. He won his first two fights before losing in the quarterfinals to the eventual gold medalist.

Incredibly, despite his lofty status and achievements in the unpaid ranks, he only had 32 bouts, losing just twice.

The athletic youngster was also a talented American football player. However, he felt his future lay with boxing.

“There came a time where I had to decide whether it was football or boxing,” he said passionately. “I just feel like boxing is what I was born to do. I truly believe this is what God has blessed me with. This is the reason for me to be on Earth; this is my purpose and I made that decision. I just loved boxing more; I have a passion for it.”

Montano will make his debut on March 18 in Albuquerque, New Mexico and, all being well, will turn around and fight two weeks later on March 31 in Philadelphia, Pennsylvania. Dunkin intends to keep Montano very active.

Dunkin is very high on the teenager and believes he has a very high ceiling as a fighter.

“Every once in awhile, a kid comes along and you see him and realize why you’re in this business,” explained the venerable manager. “He has all the talent in the world; he’s a nice guy and comes from a good family. All those things make it easy to want to work with him.

“He has terrific power and speed, a real natural athlete who could have been an American footballer but his will was to be a pro boxer. That tells me how much he wants this. I’m really pleased to have signed him. He has a chance to be very special.”