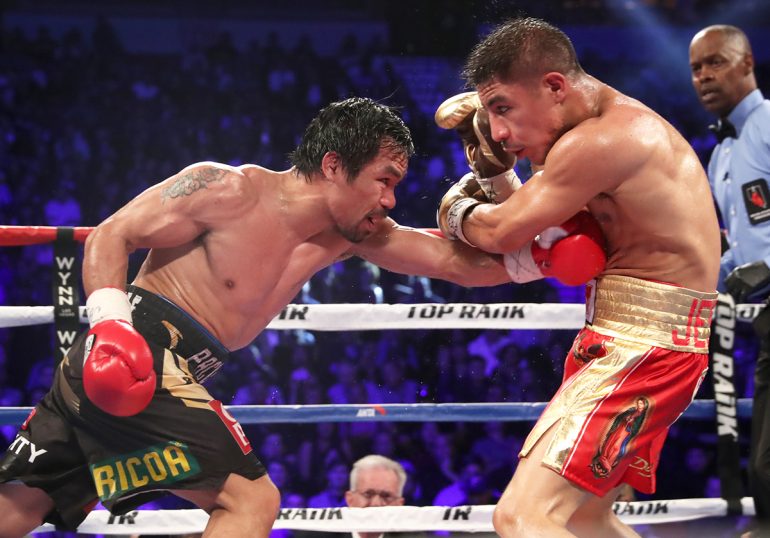 Keith Thurman doesn’t view former eight-division champion Manny Pacquiao as a serious player in the welterweight division at this point, describing him as “kind of dying out” and not interested in competing with the influx of talent currently at 147 pounds. Pacquiao, 38, is trying to finalize his next match for April 22 and, despite possessing a welterweight title, seems determined to avoid the best of his weight class as he winds down his remarkable career.

“The thing about Manny is that he’s had his hurrah,” Thurman told RingTV.com on Friday. “And we’re not really sure how long he’s going to be performing for. He had his victory over Jessie Vargas, a young champion (in November), so as long as he’s active and he’s winning, he’s a champ. The only thing is that he’s kind of dying out because we’re getting flooded with all this young talent in the welterweight division and it doesn’t really seem like Manny Pacquiao is trying to compete with the rest of the herd.”

Thurman, who is preparing for a big welterweight unification bout with Danny Garcia on March 4 at Barclays Center on CBS, didn’t hesitate to say he would be open to fighting Pacquiao (59-6-2, 38 knockouts) if the opportunity arose. A date with Pacquiao is still a lucrative and high-profile opportunity. And Thurman praised Pacquiao as a once-in-a-generation talent who is beloved by fight fans. But his time has come and gone, the 28-year-old Thurman suggested.

“It’s almost like he’s not really trying to compete with us,” Thurman (27-0, 22 KOs) told RING. “It seems like they’re doing their own thing and he might be having his last little hurrah before he leaves the world of boxing for good. But, he’s still a tremendous champion. But right now, my main concern is just facing Danny Garcia and elevating myself in the 147-pound rankings and winning two belts and we’ll just go from there and see what happens.”