Charlo vacates title, moves up to 160, Hurd and Harrison go for title 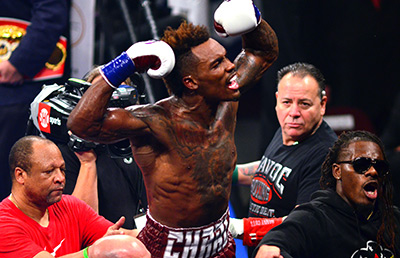 In a surprising move that has immediate implications, Jermall Charlo vacated his IBF junior middleweight title on Thursday to move up to the treacherous terrain of GGG at middleweight. As a result, the bout between Jarrett Hurd and Tony Harrison set for Feb. 25 on Fox as the Deontay Wilder-Gerald Washington co-feature has been elevated and will now be for the vacant IBF 154-pound title, it was announced on Thursday.

The bout between Hurd and Harrison was initially pegged as an eliminator for the No. 1 position in the IBF to be Charlo’s mandatory with Harrison No. 2 and Hurd No. 3. Rumors circulated before his sensational fifth-round knockout of previously undefeated Julian Williams in December that he was having trouble making 154 pounds and may move up. Now, he will throw his name into a deep middleweight division that includes unified champion Golovkin, Danny Jacobs, WBO titleholder Billy Joe Saunders and even Canelo Alvarez if he decides to move to middleweight.

“These guys have already shown their mettle by agreeing to fight each other — No. 2 versus No. 3 — for the No. 1 spot,” Tom Brown of TGB Promotions said in a prepared statement of a card from Legacy Arena in Birmingham, Alabama. “Having this match be for a world title is a great reward for two young guys who have shown a willingness to face each other.” Promoter Lou DiBella predicted the matchup would be a “war” in the release.

Detroit’s Harrison (24-1, 20 knockouts) has won three straight since he suffered an upset loss to Willie Nelson in July of 2015 when he was stopped in the ninth round, derailing his chances of a title shot at the time. “I’ve been waiting on this for a long time,” Harrison said in a news release.  “This the biggest shot of my life. It’s like my son being born all over again. It doesn’t change the approach. It just makes it much sweeter and puts that much more respect on the winner of this fight.”

Maryland’s Hurd (19-0, 13 KOs) has emerged as a top contender with impressive wins against Oscar Molina (TKO 10) and Frank Galarza (TKO 6) in recent fights. “This is the moment every boxer dreams of, becoming the world champion,” Hurd said in the release. “I finally get that opportunity on the big stage. I’m blessed.”