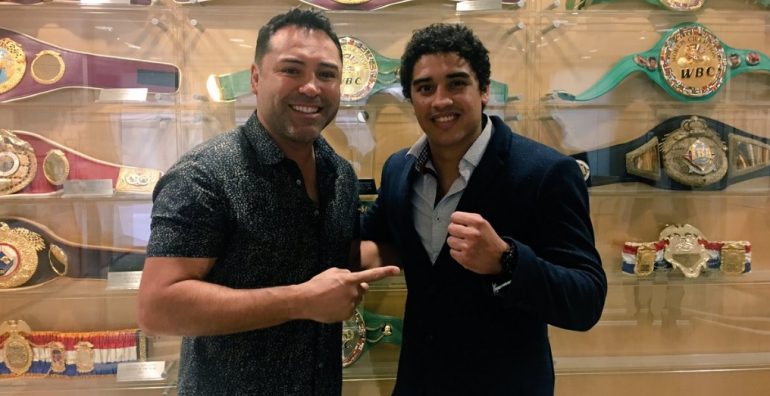 Raul Curiel Garcia has signed a multi-fight promotional deal with Golden Boy Promotions, as announced Tuesday afternoon. The announcement comes on the heels of Curiel signing a managerial deal with Frank Espinoza.

Curiel enjoyed a stellar amateur career, winning the World Series of Boxing in 2015. The 21-year-old Curiel represented Mexico in the 2016 Olympic Games in Rio de Janeiro.

“I am extremely proud and excited to belong to a company as important as Golden Boy Promotions,” said Curiel in a release. “This is a very important step in my personal and boxing life. I promise that I will go forward with the help of all, especially my idol Oscar De La Hoya, and follow in the footsteps of a great sportsman like Canelo Alvarez.”

“By the vote of confidence given by Oscar De La Hoya, (Golden Boy Promotions President) Eric Gomez, and Frank Espinoza, I will defend with all the colors of the company and with the goal of becoming a world champion.”

Espinoza believes Curiel is a can’t-miss prospect. “I had been following Raul prior to the Olympics,” Espinoza told RingTV on Tuesday morning. “There were two fighters I wanted to sign from the Mexican Olympic team: Joselito Velazquez and Raul. He was one of the best Olympians and has the amateur experience and credentials with over 200 fights.

“Just because he did not win a medal does not mean he won’t be successful as a pro. I took three Olympians (Abner Mares, Oscar Valdez, and Martin Castillo) from Mexico and they became world champions. He’s going to be in a great weight class, whether it’s as a welterweight or 154 pounds. I see a lot of potential in him.”

Enter Golden Boy Promotions, which continues to sign and invest in young prospects.

“Raul is the type of fighter Golden Boy Promotions is always looking to add to our stable of top talent,” said Oscar De La Hoya, Golden Boy’s chairman and CEO. “He had a stellar amateur career that included taking the top prize at international competitions, (including) competing in the 2016 Olympics.”