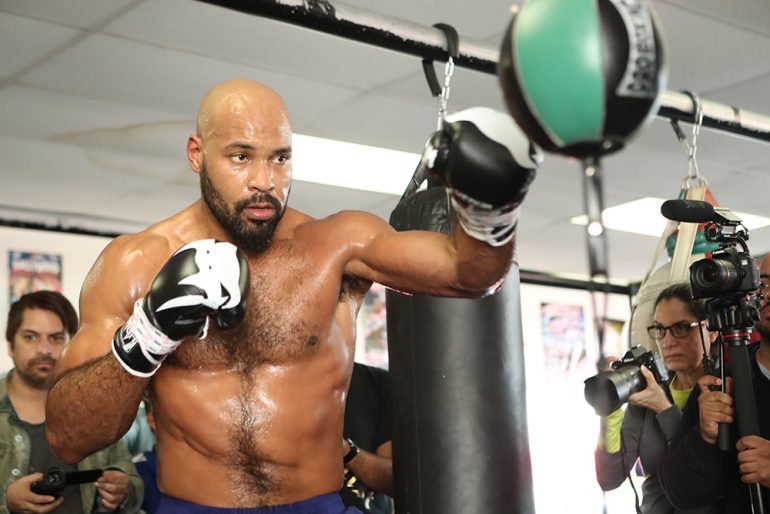 BURBANK, California – Considering the stars have aligned for him to get a fortuitous shot at the WBC heavyweight title on February 25, Gerald “El Gallo Negro” Washington feels destined to be the first to beat Deontay “Bronze Bomber” Wilder. That was the take away from the conversation Washington had with ringtv.com on Thursday afternoon at a media workout held at Pullman’s Gym – where he’s training for his big night.

“My people called me up and asked if I’m willing to accept the challenge and I said bring it on,” recalled Washington of the circumstances which led to him replacing Polish fringe contender Andrzej Wawrzyk, who failed a VADA administered drug test which was mandated by the WBC. “We wait for this opportunity our whole lives and it’s here. I’m glad that we stay in the gym, stay focused, and stay training, that way when the opportunity came, we were able to accept.”

Washington, who’s originally from Vallejo, California, conceded to the idea that a date with Wilder was inevitable, seeing as how they shared a manager in Al Haymon and the only top-15 ranking he held with any major sanctioning body was with the WBC (8th).

“You see the guys at the top. You know the guys that you want to compete against,” said Washington. “I personally want to compete against the best. I know Deontay Wilder was a big, scary monster, 37-0, 36 knockouts – I love that. Nobody expects me to do anything, and that’s fine. I’ve got weapons myself and I can’t wait to unleash them.”

The 34-year old challenger will have the opportunity to vent his talents in front of a big audience both in house, and over the airwaves on FOX (8:00 PM ET / 5 PT). The bout tops the bill of a Premier Boxing Champions card held at the Legacy Arena in Birmingham, Alabama – just a few miles from Wilder’s hometown of Tuscaloosa. It has been there that Wilder has cultivated much of his popularity since winning the WBC heavyweight title in January 2015, and a win over Washington would make it five successful defenses for the former U.S. Olympian.

A former college football player at the University of Southern California, Washington intends to make this fight a physical one.

“Those little legs won’t hold up too long with me pressing on him,” said Washington about Wilder. “He can lean on me if he wants to, but them little legs are not gonna do it. I’m definitely a lot stronger than him. I’m sure he’s gonna want to keep his length and fight cause that’s where his power is at. He has some amazing one-twos, he can whip his shots cause he’s long wiry and strong. He can hurt you with anything, any one punch. I gotta keep my focus the whole time and stay locked on him because he is a dangerous fighter. All respect to him, he’s a champion, that’s cool. All I’m saying is, I’m not scared of him. I expect him to do all of those things, and I want him to know that I’m going to be firing back.” 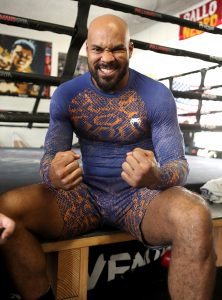 Washington (18-0-1, 12 KOs) and Wilder have both been inactive since July of last year. They fought on the same card and while Washington’s knockout win over Ray Austin was nothing to boast about, Wilder showed another example of how untamed he can get in his stoppage win over Chris Arreola. But the biggest story of the night were the injuries sustained by Wilder. The 31-year old suffered a torn right bicep and a broken right hand and now, after multiple surgeries, Wilder is ready for a comeback.

“He’s coming off a couple injuries and he had a layoff. I’ve been here training. It’s a good time,” said Washington about the favorable timing of facing such an opponent coming off an injury. “It’s a good time for both of us, but it’s the Year of the Rooster. I feel like God has a plan for me. I really feel like that he put me here. Look at all the stuff that had to happen for me to be here.”

Washington’s trainer, John Pullman, agrees that the timing is ideal but for another reason.

“Actually it couldn’t be better,” said Pullman. “It’s perfect and I’ll tell you why. A lot of times you have too much notice. You’ve got time for too many things to play out in your mind. We’ve been training. Now if you’re sitting on the couch for a month and then get a notice, that’s no good.”

As for Wilder coming off injury, Pullman barely acknowledged it.

“We’re preparing for the best Deontay Wilder you’ve ever seen,” said Pullman emphatically. “The one against Duhaupas who I thought was probably his best fight. A lot of people won’t agree with me, but just the way he handled the adversity in that fight, I was impressed with him. The one against Stiverne where he went 12 rounds for the first time. We’re preparing for the best Deontay Wilder, so if he doesn’t bring his best it’s gonna be worst for him.”

Washington’s mental capacity was one of the first big things that jumped out at Pullman about eight years ago when they first met. It took a while for him to look past the glaring 6’6″ muscular frame Washington imposes, but it was the mental strength that let him know he had something special.

“It’s definitely mental. It’s being comfortable while being uncomfortable,” said Pullman. “When you’re in the ring, when you’re training or sparring, and you don’t want to go no more or punch no more, you push yourself in those moments. There’s only a handful of those moments and you have to take advantage of those opportunities. You can’t show weakness. It’s so important. It’s a mindset, and once you get the mindset down, then you’re gonna be victorious.”

In the heat of the moment, Washington simply recollects his struggle, “I just think about all the work we put in,” he said. “I don’t get caught up in the moment of being nervous or anything like that. I look at it as being blessed. I’m blessed to be here and I’m grateful to be here. When you look at it like that, it takes all the nerves away. You’re just happy to be there. I get to fight for the heavyweight championship of the world. That’s amazing to me. Nobody is expecting me to do much but it doesn’t matter what everybody else thinks. It’s all a matter of what you believe. What you have inside your heart and the work that you put in. If you do that and you trust and you believe in yourself, you can do it all.”