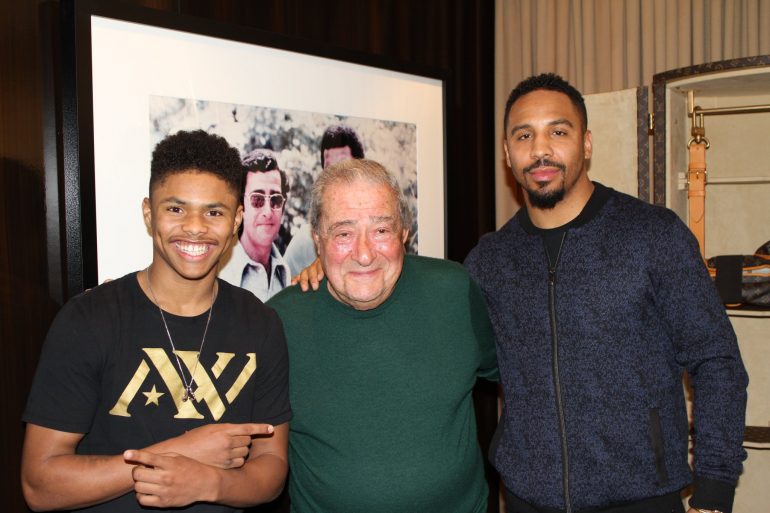 Promoter Bob Arum was almost giddy in discussing Top Rank’s most recent signing of U.S. Olympic silver medalist Shakur Stevenson on Thursday, regarded as the best American prospect in years. Arum plans to turn him pro in April at featherweight.

“He’s like a Sugar Ray Leonard,” Arum told RingTV.com, letting the words hang in the air like a bolo punch. The 85-year-old crowed that his company offered Stevenson less money than other promoters and that he was swayed by Top Rank’s ability to develop prospects. “We didn’t chase after anybody,” Arum offered in his gravely voice. “We know for sure that a lot of other entities offered him a lot more money. The kid made the right choice because he knew we had the ability to take his talents and develop them to the best possible point. We do have a track record for this.”

Arum’s Top Rank firm also inked the Irish Olympian Michael Conlan, another sensational featherweight prospect in September and Arum allowed his imagination to do a back-flip. Top Rank has binged in recent months, scooping up six former Olympians. “I’m predicting in five years we’ll have the next Leonard-Hearns fight,” said Arum, “and it will be Shakur and Conlan.”

Arum said he hasn’t decided what card Stevenson will turn pro on. Another of his talented fighters, Vasyl Lomachenko is set to face Jason Sosa on April 8 but Arum said it hadn’t been decided if Stevenson, a smooth, 19-year-old southpaw, will share the same card. Arum said that James Prince, who once worked with Floyd Mayweather Jr., a fighter Arum promoted, contacted him about potentially working with Stevenson. Stevenson of Newark, New Jersey, is represented by Prince, attorney Josh Dubin and light heavyweight champion Andre Ward. He was wooed by among others, Roc Nation and Mayweather Jr. before picking Top Rank.

“James is a good friend of ours, he called, says he’s the manager, (asks) are we interested,” Arum said. “We said yes. He had the kid meet with other promoters. He brought the kid to our office about three weeks ago. The kid liked what he saw and about a week later went to contract and negotiated the contract, finally got a draft everyone agreed on and he came in and signed it today.”

Stevenson hails from Newark, New Jersey, and Arum expects to have Stevenson fight in his home city at the Prudential Center. Stevenson told RING shortly after the Olympics he wants to fight at least once a year in his hometown. Added Arum, “We know how to develop a prospect.”