Pacquiao vs. Horn on April 22 likely to be shown on HBO or HBO PPV 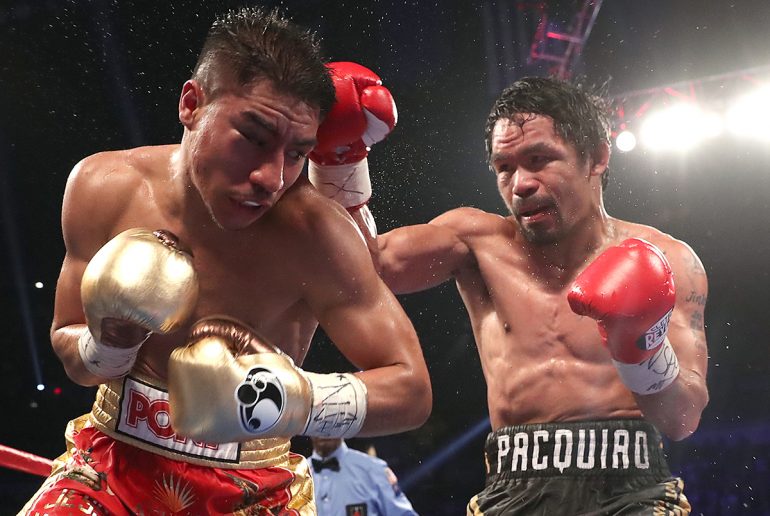 Despite talk of Manny Pacquiao possibly fighting on ESPN, NBC, CBS or even Showtime, his next bout against Jeff Horn on April 22 will likely take place on either HBO or HBO Pay-Per-View, Top Rank promoter Bob Arum told RingTV.com on Thursday.

Pacquiao’s last bout, a unanimous decision win against WBO titleholder Jessie Vargas in November, was distributed on Top Rank’s PPV arm. But Pacquiao has historically fought on HBO PPV, deviating slightly when he took on Shane Mosley on Showtime in 2011. “We’re having good discussions with HBO,” Arum told RING. “And I don’t want to go into the discussions but Todd and Peter talked about it all yesterday,” a reference to Top Rank President Todd duBoef and HBO Boxing chief Peter Nelson.

“Whether it’s pay-per-view or regular HBO — it’s going to be done, the way I understand it based on their conversation, together with HBO,” Arum went on. Of talk of Pacquiao moving to Showtime and boxing chief Stephen Espinoza, Arum added, “I know Espinoza expressed interest but we’re not going to jump anyplace from HBO. Right now, we feel that Manny’s home is with HBO.”

Arum said he also expects a decision next week on where Pacquiao-Horn will take place, if it will be in Australia or in the Middle East, which seem to be the leading locales at the moment. And there isn’t any issue of Pacquiao (59-6-2, 38 knockouts) approving Horn (16-0-1, 11 KOs) as an opponent. He’s fine with the selection, according to Arum. “That fight is done, as far as fighting each other,” Arum said. “Now we’re looking at either the fight being in Brisbane, Australia or in the Mideast and we’re finalizing everyone’s proposals. Lot of interest from venues putting up big money and we’ll make a decision next week.”

If the bout takes place in Australia, it will probably land on HBO PPV. But a bout in the Middle East, because of the time disparity, would end up on HBO, according to Arum. “If the fight is coming from Australia, they would do the fight on Sunday afternoon, which is Saturday night in the United States,” Arum said. “So it would be the same timing as if the fight came out of Las Vegas (and it would be HBO PPV). But if it came, say, from the Mideast, it might be somewhat earlier in the day and that might indicate that it would be better on free television (on HBO). But the point is we’re working with HBO. They’ve been with Manny for most of his career and we’re working with HBO on that fight.”