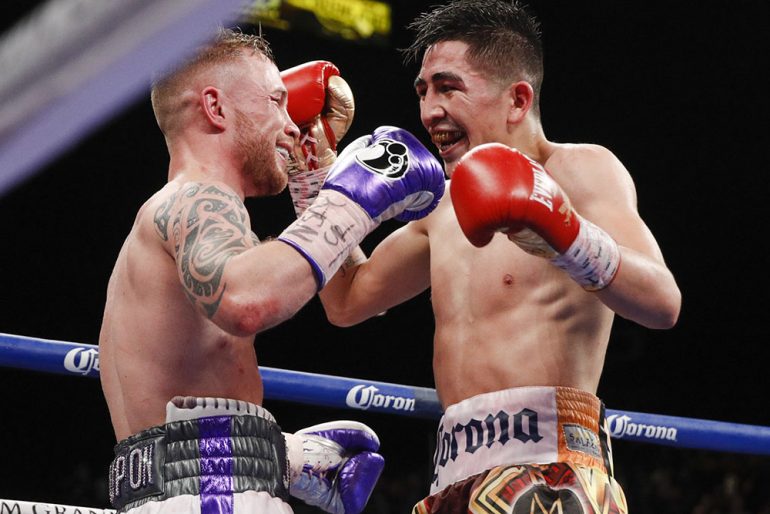 Leo Santa Cruz: Surprise, surprise. Those were my reactions after each of the two fights between Santa Cruz and Carl Frampton, the second of which took place Saturday in Las Vegas.

I thought Santa Cruz’s work rate and size would lead him to victory in the first fight but Frampton outboxed him to win a majority decision. I thought Frampton would repeat his slick performance and also win the rematch but Santa Cruz claimed a clear victory.

So much for my prognostication skills.

Santa Cruz won the final four rounds on one card and three of four on the other two to emerge victorious, a testament to his fitness and determination. He was never better.

And just like that Santa Cruz, who seemed to have his limitations exposed in his first fight with Frampton, reclaimed any lost momentum and reasserted himself as one of the best fighters in the world.

Of course, there is unfinished business. The symmetry of one majority decision each is perfect but nothing has been resolved. They must do it one more time. And it appears they will.

Santa Cruz (33-1-1, 18 KOs) was asked during the post-fight news conference whether he would consider an all-Los Angeles rematch with Abner Mares instead of a third fight with Frampton but he rejected the suggestion.

“Frampton deserves it,” he said.

The main question is where? Frampton, who has had to travel to the U.S. for the first two installments, would like No. 3 to take place in his hometown of Belfast. I would expect it to take place in Las Vegas again.

Wherever it lands, I won’t be making a prediction.

Frampton: Frampton (23-1, 14 KOs) had an outstanding 2016, during which he outpointed U.K. rival Scott Quigg and then went up in weight and the same against Santa Cruz. He was rewarded with a slew of Fighter of the Year awards, including THE RING’s, and climbed onto many pound-for-pound lists.

A lot has changed in his first fight of 2017: Gone is his title, his momentum, his perfect record and his place on the pound-for-pound lists. Such is the unforgiving nature of boxing.

There is plenty of good news, though. Frampton did nothing to tarnish his reputation as an elite talent; he simply lost a competitive fight to another fine boxer. Almost everyone loses. And, again, he’ll almost assuredly get another crack at Santa Cruz.

I don’t know whether the Irishman will figure out how to get inside Santa Cruz’s long arms in the rubber match but at least he’ll have the opportunity. A victory would return to him much of what he lost on Saturday and something he couldn’t have claimed with a victory: The ability to bounce back from adversity, which virtually all fighters must do to be considered great.

And, finally, the class with which Frampton handled himself after the fight will only further endear him to boxing fans. He fully admitted afterward that Santa Cruz deserved the victory, a rarity when the scorecards are so close. That’s called class.

Of course, Frampton’s future is uncertain but he’ll have many in his corner no matter what happens.

Mikey Garcia: I’m going to hold back on the superlatives after Garcia stole the show on the Santa Cruz-Frampton card with his savage third-round knockout of then-WBC lightweight titleholder Dejan Zlaticanin.

Zlaticanin was a good, but limited opponent. Garcia will have to beat a better foe before we start using a word that even resembles “great.”

I’m comfortable making two statements, though. One, Garcia is back and most likely better than ever after his 2½-year layoff even though he has fought only twice in his comeback. The laws of ring rust don’t seem to have applied to him.

And, two, he gave the impression of a truly special fighter even if Zlaticanin wasn’t the perfect test. Garcia seems to have it all – skills, power, experience, a killer instinct. Poor Dejan never had a chance.

Garcia (36-0, 30 KOs) kept the Montenegrin at the end of his jab, coldly measuring him for one of the most-feared right hands in boxing. And when the opportunity presented itself in the third round, a right uppercut followed by a right that can only be described as wrong put Zlaticanin to sleep for a few uneasy minutes.

The crowd at the MGM Grand Garden Arena was nothing short of dazzled. The same must’ve been true for those watching on television. Fans love a stone cold killer.

I don’t know whether Garcia can beat Vasyl Lomachenko, the potential rival with whom he is now being linked. (Imagine that fight … whew!) I doubt anyone else at 130 or 135 could hang with Garcia. And I believe only Terence Crawford would be a threat at 140.

I can’t wait to find out whether I’m right or wrong.

Miguel Berchelt: Those expecting Berchelt vs. Francisco Vargas and Takashi Miura vs. Miguel Roman to be wars Saturday in Indio, California, weren’t disappointed. As colleague Doug Fischer put it, it “was not a fight card for the faint of heart.”

Perhaps lost somewhat in the action was the magnitude of Berchelt’s victory. The 25-year-old Mexican (31-1, 28 KOs) obviously has power and a warrior’s spirit but he demonstrated against Vargas that he also is methodical, as he skillfully picked his better-known opponent apart before stopping him in the 11th round to take Vargas’ WBC junior lightweight title. Berchelt’s solid work was etched on Vargas’ bloody, battered face.

Berchelt is now a major player at and around 130 pounds and must be considered one of the best fighters from Mexico, which is a significant compliment.

He has come a long way since he was stopped in one round by Luis Florez in 2014.

Vargas (23-1-2, 13 KOs) guarantees a war every time out; he took part in the RING Fight of the Year the past two years. That means he has taken a lot of punishment. One wonders what toll that will take on the 32-year-old.

Berchelt vs. Miura is a natural matchup. The Mexican would probably win but he’d have to go through hell to do it.

Mikey Garcia wasn’t the only one who delivered a breathtaking knockout on the Santa Cruz-Frampton card.

Super middleweight David Benavidez, all of 20, put Sherali Mamadjanov (14-2, 7 KOs) down and hurt him with a left uppercut and straight right late in the opening round then finished the job in the second, the result of a big left.

That’s nine consecutive knockouts for the 6-foot-2 fighter from Phoenix, who is 17-0 (16 KOs) and a step closer to a title shot. This kid could be special. …

Ivan Redkach also got into the KO act on the Santa Cruz-Frampton card. The former lightweight contender, who had lost two of his previous four fights, appeared to be on his way to a decision victory when he KO’d capable Demond Brock (13-4-1, 4 KOs) in the final minute of a scheduled eight-round junior welterweight bout.

Redkach (20-2-1, 15 KOs) hurt Brock with a left hook and a follow-up straight left, which sent Brock to the canvas. He got up but took a further pounding, which prompted referee Jay Nady to stop the fight with 30 seconds to go.

That was a nice step in the right direction for the one-time hot prospect. …

You have to feel for Lee Selby, the IBF featherweight titleholder from Wales whose fight against Jonathan Barros was canceled on Friday after Barros failed his physicals. He sat glumly at ringside, presumably feeling left out. Let’s hope he gets a big fight soon. …

The retired Floyd Mayweather Jr. said during the Showtime broadcast that a fight with UFC star Conor McGregor “can happen.” I’ll believe it when I see it but I’ve been saying for some time now that it should be a no-brainer for both men.

They stand to earn paydays that could approach nine figures. And there really isn’t much risk, assuming they use boxing rules: We know that Mayweather would win easily against a boxing novice.

It would be akin to a professional wrestling match – a lot of talk, some obligatory action and a designated winner. Millions would watch it. …