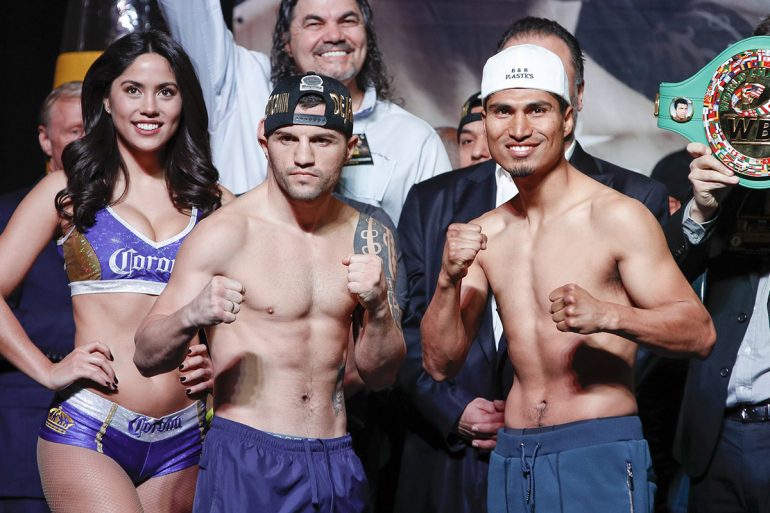 The former two-division titleholder brutally knocked out Dejan Zlaticanin in the third round to become a titleholder in a third weight class on the Carl Frampton-Leo Santa Cruz II undercard Saturday at the MGM Grand.

Garcia hurt the now-former WBC lightweight titleholder with a right uppercut, landed a grazing left and then put the champ down and out with a big right. Referee Tony Weeks didn’t even count, instead ending the fight at 2:21 of the third round. Zlaticanin remained on the canvas for several minutes before getting to his feet.

Garcia (36-0, 20 knockouts) dominated the fight from the beginning, flicking his stiff left jab and following with power rights as the overmatched Zlaticanin (18-1, 11 KOs) tried in vain to land his own punches amid chants of “MIKEY! MIKEY! MIKEY!” from the pro-Garcia crowd.

Then, when opportunity presented itself, Garcia seized it by scoring one of the most spectacular knockouts of his career and demonstrating that he once again that he remains one of the best fighters in the world. Right, left, right. It’s over for Zlaticanin, who was making his first defense, and just beginning again for the former featherweight and junior lightweight titleholder.

“I’m very happy he’s OK and I’m glad he was able to recover from that,” Garcia said. “The natural response is to be celebrating and to be cheerful, but then concern does kick in when I saw he was still laying there for a few minutes. I’m glad he’s OK.

“I’m very happy with the performance. We were controlling the pace and distance right away from the first round. I saw some openings and I thought I could hurt him later down the road, but I wasn’t expecting it to be that soon in the fight.

“He’s a tough guy, he was able to take some good punches. But when I finally did hurt him, I went for that right hand. I knew it was a good shot.”

Garcia landed 60 of 176 total punches, Zlaticanin only 16 of 60, according to the PunchStat Report.

Garcia was fighting for only the second time since a 2½-year layoff, the result of a dispute with his former promoter, Top Rank. The brother of trainer Robert Garcia, who works his corner, stopped former featherweight titleholder Elio Rojas in July.

In other undercard fights, Ivan Redkach (20-2-1, 15 KOs) scored a dramatic knockout of Demond Brock (13-4-1, 4 KOs) in the final minute of a scheduled eight-round junior welterweight bout.

Redkach, a former lightweight contender, had lost two of his previous four fights – a knockout against Zlaticanin and a onesided decision against Tevin Farmer in his most recent fight, but was made a statement Saturday.

The Ukrainian hurt Brock with a left hook and a follow-up straight left, which sent the New Orleans fighter to the canvas. Brock was able to get up but took a pounding, which prompted referee Jay Nady to stop the fight with 30 seconds to go.

“I’m very excited. I couldn’t be happier,” said Redkach, who was leading on all three cards when the fight was stopped.

Super middleweight contender David Benavidez (17-0, 16 KOs) made quick work of Sherali Mamadjanov, stopping the Uzbek fighter at 1:04 of the second round of a scheduled eight-round fight.

“I am a little disappointed because I wanted to give the crowd a spectacular knockout,” Benavidez said. “This is my first time fighting at MGM Grand and I will never forget it. The atmosphere here is amazing. This fight week has been the best experience of my life.

“I want to continue to fight as much as I can. I want to perfect my craft, train as hard as I can and be the best that I can be.”

And Josh Taylor, the 2012 Olympian from Scotland, outpointed resilient Alfonso Olvera in an eight-round junior welterweight bout. The scores: 79-72, 78-73 and 78-73.

Taylor, who had stopped all of his previous seven opponents, hurt Olvera (8-3-1, 3 KOs) in the second round but couldn’t put him away. Taylor was docked a point for a low blow in the sixth round.

Taylor was satisfied with his performance

“I wasn’t surprised he didn’t go down,” Taylor said. “I wasn’t looking for the knockout. Just wanted to get the win. … He was very awkward. I couldn’t get going like I wanted to, but I did get some shots off and felt like I hurt him at times.”