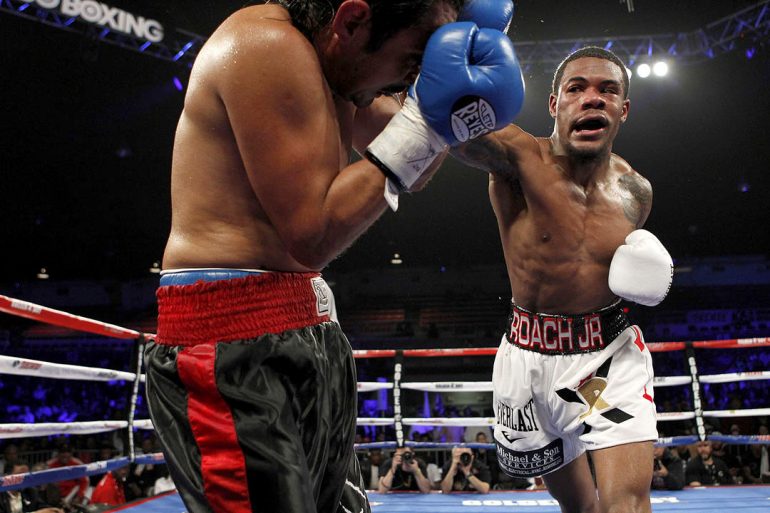 Junior lightweight prospect Lamont Roach made quick work of Alex Valdez, stopping the former bantamweight title challenger in the second round of their scheduled eight-rounder under the Francisco Vargas-Miguel Berchelt main event on Saturday at Fantasy Springs Casino in Indio, California.

Roach (13-0, 5 knockouts), a 21-year-old former amateur standout from Washington, D.C., scored two knockdowns en route to the stoppage. A body shot put the Mexican veteran down for the count. Valdez (26-9-2, 20 KOs) was slightly taller and rangier, and brought world-class experience into the ring from his days as a bantamweight contender, but the southpaw lacked the speed or reflexes to compete with the younger man.

Crowd favorite, Luis Coria, an 18-year-old high school student in the Indio area, blasted Mexican journeyman Gerardo Molina in the first round of their scheduled four-round bout. Coria (3-0, 3 KOs) robbed Molina (1-4, 1 KO) of his legs with an overhand right and proceeded to batter him into a neutral corner where referee Ray Corona waved the fight off.

Two of Coria’s stablemates kicked off the Golden Boy Promotions show with quickie KOs of their own. Cesar Diaz (4-0, 4 KOs), of Palmdale, Calif., halted Joel Cano (1-5) in the second round and Vergil Ortiz Jr. (4-0, 4 KOs), from the Dallas, Texas area, blasted Israel Villela (5-4, 2 KOs) in the opening round. Both Diaz and Ortiz are managed by Joel Diaz, as is Coria, and all three train in nearby Coachella, Calif.